Petit Futé's opinion on THE KREMLIN

The Kremlin district is hemmed in between the first ring of boulevards and the Moskva River. To the west, the ochre ramparts of the Kremlin show only the golden bulbs of its churches and the chick yellow façade of the Senate. On its northeastern facade, outside the walls, it is bordered by Red Square, which in Russian means "beautiful square", without any link with the colour of Bolshevism. Huge and majestic, Red Square is the setting for Lenin's mausoleum in the centre, the superb 19th century buildings of the Gum and the Historical Museum to the east and north. On either side, there is the enchanting Cathedral of St Basil the Blessed and the modest Kazan Cathedral. To the north of the Kremlin and Red Square, Manege Square stretches out lengthwise. Finally, the nearby Theatre Square (Teatralnaya ploshchad) is the place of all the arts with its two most prestigious theatres, the Bolshoi (the big one) and its brother the Maly (the small one). Opposite, the Metropol hotel tries to compete with its beautiful Art Deco façade.

Practical advice: The Kremlin is open to visitors every day except Thursday, from 9:30 am to 6 pm in summer and from 10 am to 5 pm in winter. The ticket offices are located in the Aleksandrovskiy garden, it is preferable to buy there the additional entrances for the Palace of the Armours and the Diamond foundation to avoid making again the queue inside. Count on a good half-day visit to not miss anything.

Information on THE KREMLIN

The Kremlin is open for visits every day except Thursdays, from 9.30 am to 6 pm in summer and from 10 am to 5 pm in winter. The cash desks are located in the Aleksandrovskiy Garden, it is best to buy the extra tickets for the Armoury and the Diamond Foundation there to avoid queuing inside again. Allow half a day's visit. Access to the Kremlin and all the sites on Cathedral Square costs 700 RUB. Climbing to the top of the Ivan the Great bell tower costs 350 RUB. Access to the Palace of Armour costs RUB 1,000.

Members' reviews on THE KREMLIN 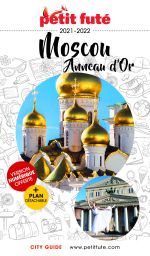