The Grand Palace complex was built in 1782 and includes not only the Throne and Royal Halls, but also a number of government offices and the famous Emerald Buddha Temple. Of western inspiration, only part of the palace can be visited. As the royal family now resides north of Bangkok in the Chitralada Palace, the Grand Palace now only hosts some royal ceremonies. The Chakri Maha Prasat, a modern royal residence, was built during the reign of King Chulalongkorn, from 1877 to 1882, by the English architect MR. John Clunish, which explains its European style. One can visit the Amari Vinichai throne room where the king always makes his birthday speech and the small arms museum in particular. Just next door is Wat Phra Kaeo whose construction was completed in 1784, two years after the capital was moved from Thonburi to Rattanakosin. The temple which occupies the North-East of the Grand Palace is probably one of the holiest sanctuaries in Thailand.

The Emerald Buddha. It is to him that Wat Phra Kaeo owes its celebrity. The most venerated statue of Thailand, the famous Emerald Buddha, has an origin difficult to trace. It is admitted that it was found in a temple in Chiang Rai, around 1431. It was then covered with gold leaf. Later, the stucco under the gold leaf crumbled, and the green stone appeared. It was then claimed to be an emerald statue (actually jasper) and was immediately considered sacred.

The governor of Chiang Rai spoke about it to the king of Chiang Mai, who wished to obtain it. Elephants were sent to bring it back, but on the way back they headed towards Lampang and not Chiang Mai. The king saw a divine omen and allowed the statue to remain in Chiang Mai. In 1468, the new king of Chiang Mai brought the statue to his capital. One of his successors left in 1552 to fight the rebels in Luang Prabang and took the Emerald Buddha with him. He later settled in Vientiane and kept it there.

In 1778, King Rama I, then General, took Vientiane and brought the Emerald Buddha back to Thonburi. After his ascension to the throne, he built Wat Pra Kaeo, which housed the famous statue. The Emerald Buddha is 75 cm high and 45 cm wide. It rests on a golden pedestal at the top of an 11 m high golden altar and under a 9-storey parasol. He changes his clothing according to the seasons: in summer he wears an enamelled golden tunic adorned with precious stones; during the rainy season, a bronze toga enamelled in blue; in winter, a golden mesh robe covers him from head to toe.

The visit. In line with the entrance door, a marble platform serves as a base for the Royal Pantheon. The life-size statues of the eight kings are kept there. The Pantheon is only open one day a year, on 6 April, the day of the commemoration of the Chakri dynasty. Behind it is the library, Phra Mondop, built in 1787, where a beautiful mother-of-pearl cabinet contains the sacred manuscripts. The floor is covered with silver mats. On the right is a miniature reproduction of Angkor Wat. Finally, at the four corners stand four statues of Buddha, in Javanese style, from the 14th and 15th centuries.

Behind the library stands the golden spire of the great chedi Phra Siratana, which was built by King Rama IV in 1855. Relics of Buddha are kept inside, hence the respect due to this place. The frescoes in the cloister tell the story of the Ramakian, the Thai version of the Ramayana, the great Hindu epic.

One will notice that this temple is very well guarded by 6 m high Yakças, armed with a sword, with faces of different colours. Kinnaris and Nagas are also everywhere.

A temple is a replica of Angkor Wat, built so that the king's subjects can appreciate Khmer architecture. The Phra Asadha Maha Chedi consists of eight prang aligned on the eastern side, covered with faience and mosaics, are dedicated to The Buddhist Trinity: the Buddha, the Law and the Community of monks, as well as to certain disciples whose ashes are kept there. The Hor Phra Gandhararat, erected by Rama IV, houses a statue of Buddha revered by farmers for his power to bring rain.

The belfry, covered with a coloured porcelain mosaic, still resounds on special occasions.

Finally, the Phra Maha Montian is a group of 7 buildings. In 2013 a new museum will see the light of day, that of Queen Sirikit's textiles. A journey through time thanks to the queen's dresses from the 1960s to the present day.

The site of the royal cremation. The ashes of Rama IX can now be found within the Grand Palais. The construction of the royal cremation site cost around 25 million euros. Many craftsmen were requisitioned for a year to offer the deceased king the most beautiful burial site possible. The site is open to the public, but strict rules must be observed to be able to visit it. 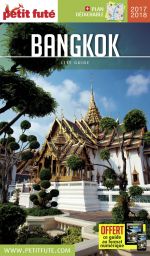