The famous Sanjoninas mark the beginning of the festivities that will animate the island of Terceira throughout the summer.

The largest of the secular festivals of the archipelago take place on the island of Terceira, mainly between June and October. The famous Sanjoninas mark the beginning of the festivities that will drive the island throughout the summer. For ten days, we will see in Angra motorcades, popular marches, exhibitions, music shows, and many other events. On this occasion also the famous touradas corda: the enthousiastes say this is a battle between the brute force of the animal and the acute intelligence of man, between power and strategy. Entrepreneurs are less philosophers, judging that every Monday, where absenteeism is rule, they represent thousands of hours lost and thus weaken the economy. But to abandon these festivities, we say, is to contradict the very nature of the islanders, a breakdown of a social link which is expressed particularly on these occasions.

The bullfighting'à la corde'is a taureaux race that often happens from arena and can take place on the street. The bull, just connected to a long rope held by some strong solids, called pastores (herders), loads quietly in narrow streets the brave white suits and light footwear that narguent it. Because of the lack of a red rag (a colour considered to be excitant the bull, which is colorblind), we use everything that falls under the hand: a hat, a shirt, an umbrella suddenly open under the horns (this latter manoeuvre, the sort of do-soil, is one of the most delicate).

We are witnessing bullfighting as a spectator on the sidewalk, behind the protective barriers put in place on this occasion, the bull often leaving the road… for the delight of fans. Sometimes the village square is turned into arenas and stands are installed for more comfort. Note: a more recent variant, bullfighting at the edge of the water, with guaranteed bathing for the brave, the bull and, possibly, the too curious spectators (as at São Mateus). This show is held throughout the summer, almost every Sunday and at local festivals, in most villages on the island.

From May to September, it is difficult to miss the bullfighting of Terceira (more than 190!), which completely ignores the killing of their Spanish cousins. " A good marriage, a good bull ". According to this saying, faithful and lasting marriages result from a meeting during the tourada corda. Have good gossip!

Angra Do Heroísmo
The Azores

Hotel
Angra Do Heroísmo - The Azores

Guesthouse
Angra Do Heroísmo - The Azores

Learn more about Angra Do Heroísmo 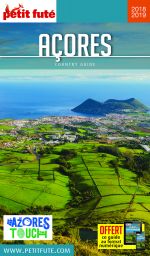