Alsace, rich in its very special history and the traditions that make up its personality, proud of its Rhine culture and its centuries-old French history, will enchant you with its towns and villages with a remarkable architectural heritage and a strong identity. It is a reference tourist destination. If the Christmas season is the best known, the romanticism of its towns and the wine tourism in autumn, the Easter traditions in its villages or the wine festivals in summer are equally worth your visit. This is a perfect destination to set off on an exceptional Wine Route

From Strasbourg to small towns with character

Giving in to the romantic charm of Petite-France in Strasbourg is a pure delight. The half-timbered houses are very picturesque. The strollers will settle down quietly on the banks of the river Ill and sip a sweet drink in the shade of tall trees. The town is best discovered by bicycle or on the water on board a bateau-mouche. Strasbourg carefully cultivates warm traditions and has preserved an exceptional cultural and architectural heritage. It is not for nothing that Strasbourg has been classified as a world heritage site by UNESCO. But this gentle city, ideally located in the heart of Europe, is also in full swing with a very rich cultural life.

As far as tourism is concerned, Alsace is paradoxically one of France's most beloved regions. It has a strong cultural identity. However, one should not expect to discover Alsatians in traditional costume at every street corner as on this sign of the pretty village of Éguisheim : the tradition of the costume would rather tend to get lost. But still, the picturesque is never far away. Countless cities of Alsatian character are among the most beautiful villages in France. The list is long, but the unmissable route inevitably passes through Obernai, Barr, Ribeauvillé, Riquewihr, Kaysersberg and Colmar. Music lovers will go to Marmoutier to admire its abbey church which houses a Silbermann organ on which Albert Schweitzer, the 1952 Nobel Peace Prize winner, used to play. This site has also been chosen to house the European Organ Centre. Alsace has a charm immense ; it has a taste of "y -y ".

On the edge of the Vosges

The landscapes of Alsace are very varied. A large part of the region fits into what is known as the Rhine ditch, a vast area of plains. This ditch is bordered by two mountain massifs, one located in France -  les Vosges  -, and the other located in Germany - la Forêt noire. The highest point in Alsace is called the Grand Ballon and can be found at 1 424 mètres. On the edge of the Vosges, clinging to the top of majestic hills, impressive castles overlook the valley, witnessing the strategic importance of Alsace throughout history. Although most of these medieval buildings are now in ruins, one of them has managed to defy the ravages of time. But appearances are deceptive. The Haut-Kœnigsbourg castle, first mentioned atXIIe siècle, was rebuilt at the beginning ofXXe siècleand not all the pink sandstone stones are original. When Alsace was part of the Germanic Empire (1871-1918), the town of Sélestat donated the castle to the Emperor Guillaume II and 1899 : the Kaiser was very fond of this fortress and made it a symbol to mark his territory. For a long time this area was the scene of confrontations between France and Germany. Alsace became French again after the First World War mondiale ; the renovated castle was taken over by the French state without a cent of its cost. The film La Grande Illusion by Jean Renoir was shot there in 1937

Mount Sainte-Odile, dedicated to the patron saint of Alsace, also perched on a hill in the Vosges, is an equally exceptional historical site. This monastery is one of the spiritual high places of Alsace. The view of the plain below is breathtaking

A unique and pioneering Wine Route

Inaugurated in 1953, the Alsace Wine Route is the oldest of its kind in France. It runs along 170 kilometres of road from the north to the south of the region, from Thann to Wissembourg. Along its picturesque route, it allows you to visit 70 villages whose wine-producing reputation is often well established. Culture, history, gastronomy: the Alsace Wine Route invites its visitors to discover all the richness of the Alsatian heritage and to immerse themselves in the daily life of the locals. Tasting workshops, wine and food fairs, wine festivals or gourmet walks, picnics at the winegrower's and a day's participation in the grape harvest: the calendar is rich in events that allow you to appreciate, in all seasons, the magnificent wine-growing landscapes and to taste good local wines in the cellars or in the traditional winstubs.

Alsace provides the most northern nectars in France. From Than go in search of Rangen, one of the only volcanic terroirs in France, to Colmar, the little Venice. On the countryside and tasting side, a stop at Mont Sainte-Odile is a must after buying a Zind-humbrecht estate, with a tablecloth and small suzel glasses... On the gastronomy side, fine gourmets will take the northern route to the Auberge de l'Ill in Hillhauesern and push on to Wissembourg, on the German border, to taste the speciality, the Crémant d'Alsace, or better still the late revenge, masterpieces of mastery in this region with its continental thermal amplitude. Riesling, sylvaner and gewurztraminer are the only grape varieties to have given their names directly to white wines

Finally, there's no question of leaving Alsace without having discovered and tasted its gastronomy. Alsatians have the reputation of being big eaters... It's a euphémisme ! The dishes are gigantic, monstrous. Pork in all its forms is the basic ingredient of Alsatian cuisine. To prepare a good baeckeofe, the famous traditional dish, you need pork shoulder, white sausages, boneless lamb shoulder, boneless beef belly, potatoes, onions, garlic, thyme, bay leaf, parsley, not forgetting a little salt and pepper. The sauerkraut " formidable " from the Maison Kammerzell in Strasbourg contains no less than ten varieties of meat and charcuterie. But according to the Alsatians, the best sauerkraut is prepared at home with the family. Little eaters will prefer a flammeküeche, a flambéed tart made of a thin pastry on which fresh cream, bacon, onions and cheese have been spread. Alsace also produces excellent cheeses, including the famous Munster, which is eaten with cumin. Finally, the bakeries offer delicious kougelhopfs (savoury or sweet), pretzels or, for the end of the year festivities, bredeles (spice biscuits). But it is impossible to name all the Alsatian specialities as they are so numerous. Something to enjoy when you come back home!

When? All year round, in autumn for the colours of the countryside and wine tourism, in December for the Christmas markets in the region or when it snows, to ski in the Vosges.

To go there. By plane, train or road (from Paris, take the A4 to Strasbourg), everything is possible. 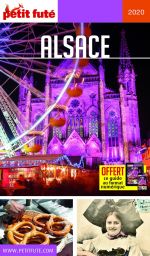 For many of us today, retirement means a new beginning. And we can quickly become envious of elsewhere. A change of ...
Read the article

Colmar is a prosperous city typically Alsatian with a rich culture. Its town centre resembles an open-air museum. Ranked ...
Read the article

In summer, the mountains offer an ideal setting for living in perfect harmony with nature. The medium and high peaks, ...
Read the article
Review