In Dijon its mustard, in Alsace its sauerkraut. You can't avoid the cliché! In the same vein, there are also storks and a few white wines that are not to be missed. Bathed by the Rhine, on the border of Switzerland and Germany, this epicurean destination offers other specialities such as tarte flambée and baeckehoffe. Alsace is famous for the Christmas markets that enliven its towns and villages every year. It is the traditional know-how of its craftsmen which is then highlighted. Alsace is also three prestigious cities, Colmar, capital of the wines of Alsace and Mulhouse the cosmopolitan, former textile city rich in technical museums, rub shoulders with Strasbourg, European capital bathed in canals, deployed around the Grande Ile de l'Ill with its Gothic cathedral with its famous animated astronomical clock. Many other attractions are to be discovered: the Haut-Kœnigsbourg castle, fortress on its mountain for nine centuries, the Mont Sainte-Odile, place of pilgrimage, the natural areas of lakes and forests, the wild beauty of the Vosges, without forgetting the... 180 Alsatian museums. As France's leading cycling region with 2,500 km of cycle-roads and greenways, Alsace is an invitation to walk. So there is more than one route to follow through the region, on foot, by bike, on horseback, by car and even by boat on the river. Your tour guide will help you plan your itinerary.

What to see, what to do en Alsace? 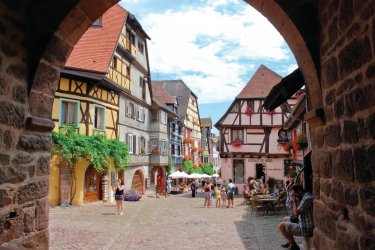 What to visit en Alsace ?

When to go en Alsace ?

When to go to Alsace? If the magic of Christmas symbolizes this destination, the region offers attractions all year round: the flamboyant autumn and the scents of spring, swimming in the lakes in summer, the pleasures of snow in family resorts in winter. But let's be honest, if this destination is enjoyable all year round, nothing beats the magical festivities of December. You should also know that if tourists flock particularly during this period, they are also numerous during all school holidays because Alsace lends itself to family tourism. In autumn, activities around the grape harvest and the winegrowers make the Alsatian wine route even more attractive. In any case, as the destination is very touristic, it is better to prepare your trip in advance. In return, you will benefit from well-established reception facilities and services on site.

The Route des Crêtes is closed in winter due to snow and, during the harvest, access to the vineyard paths is regulated. The Tourist Offices will inform you of the most suitable itineraries.

The best places to camp in France

The 10 most beautiful villages in Eastern France

There are currently no photos for this destination.