If you're in Los Angeles right now, don't miss Cleon Peterson's "Hysteria" exhibition at the Over the Influence gallery. Born in Seattle in 1973, Peterson has exhibited all over the world and was, among other things, artistic director of Obey. In his paintings, sculptures and murals, Peterson has developed a distinctive graphic style, through which he depicts a psycho-social landscape torn apart by fear, violence, power and submission. "Hysteria" reflects the evolution that has taken place in Peterson's thinking in recent turbulent months, between the pandemic and the US presidential election. As political propaganda proliferated, Peterson moved beyond the formal and conceptual binaries of his earlier work to create images that embody the confusion, anger, and horror of the current era. A near-realistic mirror of decline and a warning of what may lie ahead. 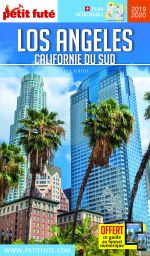 To discover the wonders of Polynesia or to travel to California, Air Tahiti Nui is the airline of choice. It offers ... Read the article

Passionate, fascinating, sometimes even revolting, California never leaves anyone indifferent. If the greatest have sung ... Read the article

10 haunted places in the world

Horror movies, scary stories or ghost trains: we all like to scare each other! The ten destinations we have selected ... Read the article