At the confluence of the Save and the Danube, Kalemegdan fortress was built by the Serbian despot Stefan Lazarević in the xivth century and then rebuilt entirely by the Austrians from 1717, according to the Vauban systems. From 1739 to 1830, the Turks established their most advanced points in the Balkans and controlled the movement of Austrian troops below. A number of Ottoman monuments of that period were retained: they are located in the upper part of the fortress. The fountain of Mehmed Pacha Sokolović was erected in 1576 by this vizir known for its Serbian origins: he was abducted as a janissary at the age of 8. We also need to see the mausoleum (türbe) of Damad Ali Pacha, vizir killed in Petrovaradin in 1716, or the hammam built in 1870. The fortress is also interesting for its various towers and medieval doors. The oldest is the tower of Despot, square tower used in the xivcentury as the main access to the fortress. To reach the Military Museum from the center, we pass through a succession of doors, such as the Istanbul gate built in 1750 or the door of Karađorđe erected in 1806. Another remarkable monument, the tower of Nebojša, was built in 1460 and used in the Middle Ages as a step between the old port on the Save and the upper city. In the eighteenth century, it was transformed into a dungeon, and the Greek revolutionaries were tortured and executed in 1789. In the lower city there are some vestiges of medieval times - fragments of ramparts and mounds - and churches. The church of Sainte-Petka is backed by the rampart and honors the holy Greek. The small Ružica church is known for all the belid students who will take a little tour before a review. Next to it is the ossuary of the heroes of 1914-15, when the city was defended by the population. The park is also open at night, for a romantic walk and a breathtaking view under the star sky…

The monument of recognition to France. You will find the monument at the entrance to Kalemegdan Park, arriving by pedestrian street Knez Mihailova. Eriged in 1930 by the sculptor Ivan Meštrović in an Art Deco style, he was a tribute to the Serbian people for the help she gave him during the First World War. Indeed, it was the East Army that recovered the Serbian army in 1915 to restore it and, from the Salonionic front, operated in the autumn of 1918 a victorious progression through Serbia. It was this spirit of sacrifice and the very strong ties that took place on this occasion between the Serbs and the French whom Meštrović wanted to honor. Under several bas-reliefs of French soldiers, it is written: «We love France as it loved us.» " "

The Army Museum (+381 11 334 3441, www.muzej.mod.gov.rs. Open from Tuesday to Sunday from 10 a. m. to 5 p. m.). In the upper part of the medieval fortress are more than 40,000 pieces relating to the military history of the former Yugoslavia, the most remote times to the present. Weapons, uniforms and documents on the revolts of Haidouks against the Turks, Serbian and French uniforms of the famous French army of East which liberated Serbia in 1918, etc. Colorful museum and excellent testimony of various aspects of Serbia's history. In front of the museum, fans will be able to admire a wide range of Yugoslav, American, French and Soviet tanks of the Second World War.

The winner of Belgrade. At the end of the fortress, overlooking the encounter between Save and the Danube, we see the symbol of the city of Belgrade: perched on a high neoclassical column, stands, in a proud and serene attitude, a young soldier with a message of peace. Built in 1928 by Ivan Meštrović, this imposing sculpture recalls the sacrifices of the Serbian army for the liberation of the homeland in 1918 alongside the famous French army of East.

Ružica Church, located in the upper city of the fortress of Belgrade, in front of the door of Zindan. According to tradition, the first church bearing the same name was built in the fifteenth century under the rule of Stefan Lazarević. In 1521, it would have been completely destroyed by the Turks. Notice the candeclabics made from bullets, it's to say the least!

transport
accommodation
Stays
On the spot
4.7/5 (10 notice)
Share on

To envisage one day to visit the fortress and its neighbourhoods. The entrance of the fortress is free but there exists a ticket grouped at RSD 400 (RSD 300 for reprocessed children/students/) which includes the visit of the Tour of the Clock (RSD 80), the Roman well (RSD 120), the Roman ruins of 1st at the 4th century (RSD 200), of the circuit Nebodont and the Nebojša tower (RSD 200). Open Monday to Saturday from 11am to 7pm. The military museum is within the boundary of the fortress. 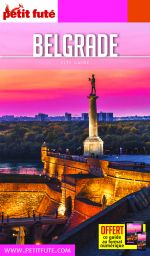