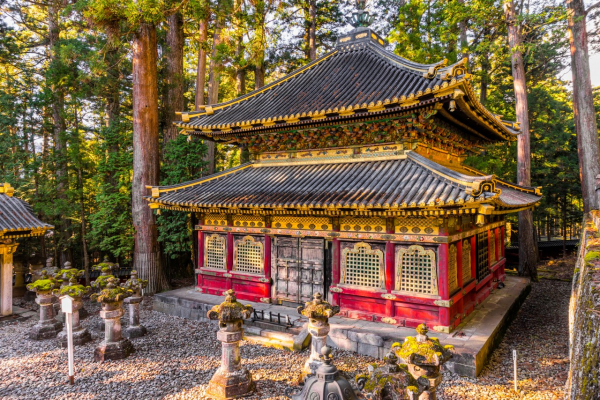 Nestled in a magnificent cedar forest, the Tōshō sanctuary is the flagship tourist site of Nikkō and is listed as a UNESCO World Heritage Site. Built in 1636 to serve as a mausoleum for the Tokugawa shogun Ieyasu, it is typical of the Momoyama style, with its unusual engravings, gilding and flashy colours. At the time of its construction, it was a significant and expensive project, which was completed in less than two years. Many buildings are revealed along the walk, including the Shogun's Mausoleum and a five-storey pagoda. Going north from Ōte-dōri, the Sennin ishidan stone staircase leads to the 8m high granite torii. Immediately to the left of the torii is the five-storey pagoda, about 30 m high, built in 1650 and rebuilt in 1818. Each floor represents one of the elements (earth, fire, water, wind and sky). The architrave on the first floor is decorated with the signs of the Chinese zodiac. On each floor, on black lacquered doors, the coat of arms of the Tokugawa people can be seen. A staircase leads to the Omote-mon door. On the lintels and pillars are various sculptures representing flowers and heads of baku, a creature that devours dreams. The gate is guarded by statues of the Deva. Immediately after, you can see the three sanjinko (sacred shops) and to the left of the portal, the shinkyūsha (the sacred stable), which houses a carved white horse. The ornaments, consisting of relief carvings, depict three monkeys that are the guardian spirits of the horse. At the approach of a basin for lustral waters: the rinzō. There is a library of sutras that contains more than 7,000 Buddhist scriptures. Another staircase leads to a terrace where a large candelabrum and two lanterns donated by the Dutch through François Caron are displayed. Behind the Drum Tower, the Honji-dō is a vast space dedicated to Yakushi Nyorai (one of the representations of the Buddha). The ceiling was decorated with a huge painting, the Moaning Dragon (Nakiryū), which seemed to whine when one clapped one's hands underneath it. After its destruction in 1961, a contemporary artist, Nampu Katayama, was asked to paint the dragon.

Yōmei-mon. After another flight of stairs, you can reach the famous portal that some people call the jewel of Japanese architecture. It was at this gate that lower-ranking samurai would stop, while higher-ranking samurai could pass through after laying down their swords. It is also called the Dusk Gate because it was supposed to hold the attention and dazzle the visitor until nightfall. The portal consists of two floors and is supported by twelve white painted elm columns. On the beams are medallions or bas-reliefs in which characters, animals, flowers, trees, fruits and the famous tigers, whose woodwork makes it possible to reconstitute the fur with incredible finesse, merrily mingle. Patterns are carved upside down to ward off bad luck. On the central beam of the second floor, there is a dragon and two other dragons are on the ceiling. Once you have passed Yōmei-mon, you enter another courtyard separated from the sanctuary by an enclosure.

Kara-mon. This new gate allows you to reach the Hai-den and Hon-den. It is also decorated with multiple ornaments, flowers and dragons, carved on the pillars and leaves. The ceiling is decorated with a fairy playing the harp and, on the edge of the façade, a bronze tsutsuga (mythical animal) can be seen. On the right is the sacred barrier that ensures the crossing of the enclosure to reach the Hai-den.

Hai-den. Antechamber of Hon-den, it is divided into three rooms. In the central room, the coffered ceilings painted with dragons and the friezes above the lintels give a glimpse of birds and plants. The sacred mirror, which embodies a deity, can be admired there. The western room was reserved for the imperial family, while the eastern room was intended for the shoguns of the three Tokugawa clans (Owari, Kii and Hitachi), referring respectively to the fiefdoms of Nagoya, Wakayama and Mito. Note the inlays of paulownia flowers and pheasants on the panels of these two rooms. The Hon-den is accessed through the stone space.

Hon-den. This building has three rooms: the Hoiden, the naijin and the nai-naijin. The Hoiden houses the golden gohei, folds of gold paper attesting to a divine presence. It is in the nai-naijin that the three families Ieyasu, Hideyoshi and Yoritomo are venerated, surrounded by artistic masterpieces. Between Yōmei-mon and Kara-mon, you must go to the ticket office to pay the entrance fee and enter a lacquered corridor. The entrance door is carved with a sleeping grey cat (nemuri neko) by Hidari Jingorô (1594-1634). Contrary to the French adage "when the cat sleeps, the mice dance", the cat's sleep here announces that rodents have been driven out of the sacred enclosure. This very popular cat has become a symbol of Nikkō. On the other side of the courtyard, the sakashita-mon, also decorated doorway, beyond which a staircase of 207 steps leads, after crossing the inuki-mon, to Hotō, a bronze pagoda where the ashes of Ieyasu rest. When you leave Tōshō-gū by Ote-dōri, you walk along an avenue that leads to Futara-san.

Opening time and information on TOSHO-GU 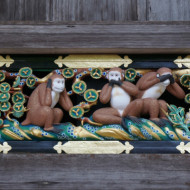 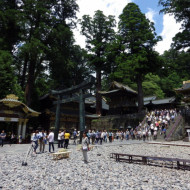 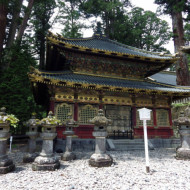 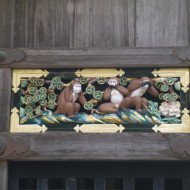