Myohyang Mountains are dotted with about twenty Buddhist temples, including Pohyon Temple (or Pohyonsa) which is a national treasure.

Built under the Goryeo dynasty in 1024 and named in honour of the Samantabhadra deity (Poyon Posal in Korean), the Temple became one of the largest centres of Buddhism in Northern Korea, as well as a major pilgrimage site. Like many other temples in the country, it was heavily damaged by the bombing of the Americans during the Korean War: in 1951, half of the buildings composing the religious complex were completely destroyed, including the main building. Since then, many of them have been rebuilt: it is too bad that the finest elements, once made of wood, have been rebuilt in concrete. During the same war, the temple was entrusted with the protection of the copy of Jeonju, the annals of the Joseon Dynasty. It was kept nearby in the Hermitage of Puryong. This effective protection allowed preserving this copy, the only one that resisted the war.

Initially, visitors entered the temple through a series of three large stone ceremonial gates (it is rather a kind of tower), the outer door called Jogye gate which was built in 1644 and houses the statues of Deva, then the second door called Nirvana (Haetal), and finally the third one known as the "four heavenly kings" (Chonwang), which contains statues of divinities. In addition, the temple contains a copy of the Tripitaka Koreana, which is a thirteen-storey octagonal pagoda, a collection of 80 000 pounds made of wood (including copies of a 13Th-century Buddhist sutras collection, the originals are in the Haeinsa Temple in South Korea).

It is not possible to visit all the buildings, but you can enjoy the garden and the splendid view of the surrounding mountains. There is a small shop where you can buy some decorative items and refreshments. A UNESCO World Heritage listing application was filed in 2000 by the North Korean Government. The site was recognized as a biosphere reserve in May 2009.

Myohyang Mountain 묘향산
North Korea
You are the person in charge of this place, click here 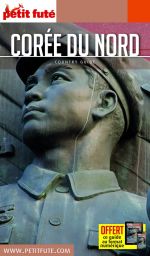