The wall wall has a circumference of about 2 km, a height of 4 m and a thickness of 3 m. Two doors allowed to enter the palace. The main door west was reserved for the sultan and his family, as well as for dignitaries and visitors. The second, to the south, was used for slaves and soldiers.

The palace consists of several brick buildings, which are fitted with multiple techniques, the most common of which is to alternate the rows of vertical bricks to horizontal rows. The wall of the enclosure often consists of bricks and stones. The bricks bear the marks of manufacture of the various makers that made them; these brands are apparent in the sultan's private apartments and in the lodging of guards.

After crossing the main entrance door and over the guard stations, you are facing the two most impressive monuments of the site.

On the left, the board and the hearings are 8 m high and invite to cross its corridors to access, through a small door, the central hall of the hearings. You can still make an idea of the half-collapsed ceilings, made from an assemblage of trunks of ouadi palms and mats.

To turn to the sultan, each person first had to get rid of his dagger (usually attached to elbow) and his ceremonial clothing. He then made his head naked by striking in his hands and then agenouillait away and sitting on his heels, hands crossed on his chest. He could then send his request to the sultan, while keeping his eyes down to the ground.

Facing the council room, in the south, and similar height, the white tower, or goussour baïda, so named because it was then entirely painted in white, remains somewhat enigmatic. It was built for the sovereign's prayer, but was also built according to rather pagan methods. Its square shape indicating the four cardinal corners symbolized the Earth, while the four small round squares built in the corners paved the sky. At the top of the tower, the line of brick in saw teeth recalled the vibration of light. It is believed that this ensemble was the theatre of rites aimed at maintaining fertility and the smooth running of seasons.

To the east of the council room and hearings is the accommodation of the sultan's wives. The rooms were located on the ground floor and communicated among them; on the floor (it is still possible to climb the stairs but with caution) was the living room. Moucharabiehs allowed the ladies to observe the courses, to distinguish those who entered the council room, without being seen.

The ruler also possessed concubines that he housed in a more summary apartment, south of the harem, kept by the box of the eunuchs. In a small court, the sovereign made justice, installed under a acacia.

The Sultan's apartments are located behind the women's homes; The bottom room has three central pillars that support the floor.

Ouara
Chad
You are the person in charge of this place, click here 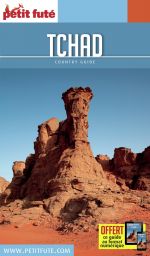