Rio de Janeiro is not a city like others. Indeed, the city is making the feat of gathering the most beautiful natural and urban sites on the planet in one place! Incredible! The ocean touches here the largest urban forest in the world, the sky, the sea, the mountains and the stone are just one to give you unique landscapes in the world in a colorful and festive atmosphere! Socially rich, the city is a mixture of population within a former colonial world of any age where the incredible postmodern cathedral of São Sebastião is juxtaposed to the arches of Lapa. Rio is a nice blend of the earth and the men who invite you to discover others. Besides, Brazilians like to say that "God is the artist." And Rio, his masterpiece. Ready to go to one of the most beautiful and lively tables of our time?

With its thick facade and monumental dimensions, this fortress church is an excellent representation of religious buildings built as a place of worship and as a defensive tower during colonial times. In fact, on its white façade lies gurgles and turrets with candy balls. However, under these cold and glabish walls, one of the most sumptuous interior is hidden! Cherubins watch the Virgin of Montserrat, the architecture is exuberant and each wall is filled with leaves painted with fine gold. Massive silver chandeliers weigh 227 kg each and above the balcony, supported by two magnificent sirens, hides an ancient German organ dating back to 1773. Saint Benedict, the martyr to honor in this world heritage building, is also admirably represented.

It must be the visit of Rio! This historic heritage sculpture is 31 meters high and weighs 1,145 tons. Created to celebrate the hundred years of Brazil's independence, it was the French Paul Landowski who carved the hands and face of the famous statue. It has the specificity of being covered with a stone stone, a rock whose particularity is that it is soft out of the earth and hardened in contact with the air. Inside the sculpture, one can access a small chapel dedicated to Santa Aparecida, the saint of miracles. If time allows you, you can enjoy an incredible view of Rio de Janeiro, 709 meters above sea level which will include Guanabara Bay, the beaches of the Zona Sul, the Rodrigo lagoon and the North Zone with the Maracanã.

An essential stroll on a 500 million-year-old quartz block with a height of 395 meters. The strange name of Sugar of Sucre, Pão de Açucar in Portuguese, would be inspired by the sugar molds used once to form sugar blocks. In 1912, the first wooden cable car was activated. Today it is no longer in wood, but the journey remains the same! It would be useless to tell you everything you can see during your journey, so many panoramic views. If you are not a cable car enthusiast but walking, you can take a hiking path, which is free! So you can get an overview of the Brazilian jungle and watch typical monkeys: the macaos. Still plan a good anti-mosquito and good shoes, the path is sometimes slippery!

The most famous beach in the world! It extends over 4 kilometers and is frequented by millions of cariocas. It is an unmistakable spot in the daily lives of the inhabitants of Rio de Janeiro. Of course, the beach no longer holds the title of "the city's most chic beach" (Ipanema stole the star), but it has one I-don't know what gives it a lot of charm. During your walk and/or bathing, you can see a bronze statue sitting on a bench. It is the poet Carlos Drummond, an emblematic man in Brazilian literary culture. For the less receptive to poetry, you can always chat about the bodies of the swimmers or surfers who mark the beach! Sexy bikinis are also in honor!

This greenery is considered one of the world's ten largest botanical gardens. Rich in plants, it alone compiles 6,000 species of plants and trees. Its architecture is so beautiful that it is a true garden of Eden which is hunted by 2 streams that cross it: the riacho Iglesias and the Rio dos Macacos. It was the Portuguese prince Dom João VI who built this land paradise to relax his personal needs, like the one to grow tea. Not to miss, the space dedicated to exhibitions: the Blue House of Pacheco Leão. You can also visit within this immense park 2 miniature gardens, one of Japanese inspiration and the other from the Amazon. Finally, stop near the pond to observe magnificent Vitoria Regia, giant lilies.

Inaugurated in 1905, this street marks a great turning point in Brazilian history. Indeed, by building this immense avenue, Brazil wanted to show that it turned to the future. Today, on the 119 buildings of origin, there are only 10… yet this is the place of all the demands and many essential buildings! Indeed, you can contemplate the first skyscraper in Latin America, the municipal theater and, right across the street, the Museum of Fine Arts. Although the collections are very limited, it is possible to see the key artists of Brazil such as Eliseo Visconti, Di Cavalcante and so on. We can also see paintings from the French artist Taunay, who painted a large number of landscapes and urban scenes in Rio during his stay in Brazil.

Located inside Quinta Park in Boa Vista, this museum was a gift from Elias Antônio Lopes, a Portuguese merchant, to Prince Dom João VI in 1808. First royal residence, he was also the seat of the Constituent Assembly in 1891. A year later, he will become the «Brazilian National Museum». It is the oldest scientific institution in the country and the largest museum of natural history and anthropology in South America. Inside, the collections are literally bluffing: skeletons of prehistoric animals, Etruscan ceramics, Egyptian tombs, indigenous objects around the world, etc. The most impressive pieces are without doubt the meteorite of Bendego, which is one of the largest in the world (4.9 tons), and «Luzia», the oldest human skeleton discovered in America from the south.

In 1990, the painter Jorge Selarón launched the Grande Locoura (Great Folie): painting and decorating the stairs of a whole street. To realize his ambitious artistic project, he uses azulejos, ceramic tiles, to drape the 215 steps of a staircase. Interestingly, azulejos come from all over the world! Indeed, some fell under the charm of this crazy project and sent material to the artist. However, some azulejos were performed by the artist himself. To recognize them, we must look for the famous signature, a pregnant woman, who appears in all the works of Jorge Selarón. Other reasons are inspired by Brazilian personalities such as artists or sportsmen. The purpose of this crazy project was to pay tribute to the Brazilian people, which is quite successful! Our advice, get off the stairs at the end of your visit to Santa Teresa.

The last jewel created in Rio: The Museum of Tomorrow. Futuristic in its architecture, this white building has an area of 15,000 m ² and is inspired by the form of bromela, a flower of the Mata Atlântica forest. Focusing mainly on the ecological problems of our planet, the museum is 100% fed by green energy! Solar and sea water are used to support all the needs of the building. Inside, art and science blend together. Indeed, here we question humanity on climate change and their impact from a scientific, social and ecological point of view. The world of tomorrow is presented with a multitude of digital and interactive tools that give this adventure in the future a playful and committed side. 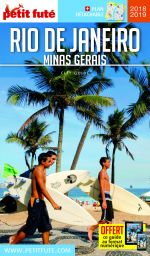 New Year's Eve is fast approaching and you still don't know where to celebrate it? And then, who said this party was ... Read the article

While summer is still struggling to arrive in France, some countries enjoy an optimal level of sunshine all year round. ... Read the article