Welcome to Brazil, the country of excess and samba, whose territory covers nearly half the surface area of South America! From the kingdom of jaguars in the swampy plain of the Pantanal, to Recife, to South American Venice, from the immense Amazon rainforest, the world's largest ecological reserve, to the Iguaçu waterfalls on the border with Argentina, from the futuristic architecture of Brasilia, the capital, to the favelas of the working class districts, Brazil is not only about its paradise beaches symbolized by the mythical Copacabana and Ipanema in Rio de Janeiro.
Brazil is also and above all the product of a formidable crossbreeding in Portuguese between Africa, Europe, Asia and Amerindian culture. A nation of a thousand colours that parades every year in February in the streets of Rio during a dazzling carnival under the Sugar Loaf and the statue of the Redeeming Christ on Corcovado. A trip to Brazil is always the opportunity to immerse yourself in unique atmospheres with your tour guide: the Afro-Brazilian atmosphere of the historic centre of Salvador de Bahia, the tranquility of Ilha Grande Island while sipping a glass of caipirinha, Manaus, the city built in the middle of the Amazon jungle, Ouro Preto, the former mining city of the gold rush, but also Fortaleza, São Luis, Belo Horizonte, Belém, La Diamantina, Goiás, São Cristóvão, Capivara Park, Chapada Diamantina Park, Praia do Forte, Natal, Itacaré, Paraty... There is enough here to make a different trip every year of your life.

What to see, what to do Brazil? 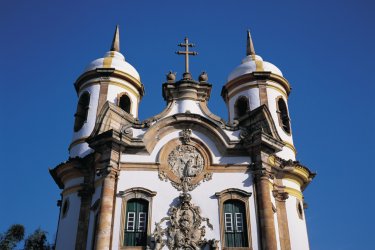 What to visit Brazil ?

When to go Brazil ?

Brazil being located in the southern hemisphere, the seasons are reversed compared to Europe. During the southern summer, from December to March, it is hot all over Brazil, even very hot in Rio and São Paulo. Generally speaking, Brazil can be visited with pleasure all year round and there is no really better time to travel there even if the territory is so vast that it concentrates half a dozen different climates. In the Northeastern States, from December to March, there are frequent but brief showers. The period from June to December is the best time to travel in the Amazon. If you go to Brazil in February-March, you can attend the great Carnival of Rio de Janeiro which takes place every year during the 4 days preceding Ash Wednesday, the day after Mardi Gras.

Due to the Covid-19 pandemic, entry and travel restrictions may apply Brazil. Remember to visit the site of the Ministry of Foreign Affairs before you leave for the latest information
Practical information for travel Brazil
Formalities Budget Horaires Getting around Gastronomy

The great classics of Brazil

How to go Brazil

There are direct flights to many Brazilian cities including Rio, Salvador de Bahia, Sao Paulo, Recife and Fortaleza. The price depends on the company borrowed but above all on the booking time. To obtain attractive rates, it is essential to do so well in advance. Remember to buy your tickets a few months before departure! Brazil is well suited for autonomous travel with many bus and air connections throughout the country

You will find many specialized tour operators in Brazil. They produce their own trips and are usually very good advice because they know the country inside out. It should be noted that their rates are often slightly higher than those of generalist travel agencies. The tours most often combine one or more cities and rarely forget to take a trip to Iguaçu Falls.

Given the vastness of Brazil's territory, flying is still the best way to travel the country in all directions, but if you have time, the bus network covers the whole country with comfortable but sometimes long night trips and punctual departures. The road network is in good condition.

Since Jean de Léry and André Thévet in the 16th century, Brazil has fascinated the French and Westerners. It must be said that with its gigantic size, its bestiary, the plurality of communities that inhabit it, its historical and natural heritage, travelers with an inquisitive mind cannot help but be attracted to this land of superlatives. Both tolerant and violent, the country has allowed marriage for all since 2013, well before France, while homophobic crimes are numerous and the police are regularly pointed out for their excessive use of violence. The small swimsuit vendor on Copacabana beach will have a bank terminal while part of the city is devoid of even the most basic services. It is all this, the codes, realities and customs of this country, but also its incredible cultural wealth, that we will try to present here.

It is a word often chanted during carnival and festivals. In spite of the problems linked to poverty and the violence that ensues, it is indeed a feeling of permanent happiness that seems to inhabit the Brazilian soul. All it takes is a few glasses of beer or caipirinha or a few chords of samba to bring this nature to life

It is in this region that the future of the planet and the political future of Brazil is at stake. It is the green lung of planet Earth and one of the most important hot spots of world biodiversity. Finally, it is the heart of the struggle between the Eros of humanity and the Thanatos of globalized agriculture defended by multinational firms.

The cacique Raoni made the world discover the unenviable fate of the first inhabitants of Brazil: the Amerindians. Today, there are 305 indigenous peoples with 900,000 inhabitants, compared to 5 million in 1500. The reserves represent 13% of the Brazilian territory, and 1.5% outside the Amazon. Unfortunately, their daily life is often miserable.

Among the discoveries not to be missed, the epicurean traveller will discover a local alcohol that is often available in a "festive" form, the caipirinha. This is cachaça, a Brazilian rum with multiple arms and flavours. Less well known than rum, this alcohol is also obtained by distilling sugar cane in "stills"

Another element associated with Brazil. It is the country of coffee. The plant at the base of this universal beverage is not native to Brazil, but it has contributed to the design of certain regions during the coffee cycle, in the interior of the states of Rio and São Paulo and to the election of many statesmen. The cafezinho is an institution in Brazil.

Indissociable from urbanization and social segregation in Brazil, the favelas are known as "grey areas" where the State is absent. Since their appearance more than a hundred years ago, the favelas have marked the city. Violence is certainly present, but they are also social laboratories and dynamic territories

This local stew is now part of the Brazilian culinary heritage. Like the Portuguese cassoulet or cozido , it is a typical popular dish made of vegetables (black beans) and non-noble pieces of meat (pork). Restaurants usually offer it on Saturdays and it is an opportunity for friends to meet and exchange

It is a sport that is inseparable from Brazil. Some say it is a religion, with the Maracana stadium as its main temple. During World Cup tournaments, an entire nation unites behind the Auriverde team. The rest of the year, however, it is the local or regional derbies of the Brasileirao that monopolise the discussions and passions.

Why these words here? Very quickly, the traveler will see in some restaurants prices displayed by the kilo. Brazilian specificity, you can fill your plate in self-service and have it weighed. The buffet or bufê consists of eating whatever you want for a fixed sum. Very popular, you can find cheap kilos and very chic ones

Brazil is a mystical country where religion is prevalent in every place and environment. Christianity, but also animism and Afro-Brazilian cults have shaped the soul of the country in a subtle syncretism. The spiritual accompanies the difficult daily life. Here, as in Morocco, when people plan to meet again, they add "se Deus queser".

Violence is inseparable from Brazilian society. It is undoubtedly the result of violent colonization against the indigenous people, of slavery and of current inequalities. The military regime from 1964 to 1986 generalized and legitimized it and it escapes the control of the recovered democracy. We live with it while trying to preserve ourselves from it...

You can quickly see whether you have to get on the front or the back of the city bus. Depending on the city, the "cobrador" (local ticket collector) is at the front or at the back, next to the turnstile

You handle the "art of the beach" in Rio, coming in flip-flops to the same "posto", and eating biscoitos. You ask your neighbour to watch your belongings, reduced to the bare minimum when you go swimming.

You "pester" the waiter or waitress and shake the bottle mechanically to indicate that it is empty. What would be considered an improper whistle elsewhere is a traditional way of signalling

You tell a stranger your life story when you are waiting in line at a bank or waiting for a bus.

You don't leave money on the table in a restaurant, but hand over the bill and tip to the waiter.

You give a long " abraço" (hug) to the friend you are leaving... even if it is for a short time.