Tulum, beach and sunbathing in the Caribbean of Mexico

In Mexico, the Yucatán Peninsula is bordered by the turquoise and emerald waters of the Caribbean and the Gulf of Mexico. The region is also home to vast nature reserves with exuberant vegetation, where jaguars, toucans and monkeys of all kinds still live. The ancient Maya, who venerated astronomical and natural cycles, have left many traces of their presence in the region. Everywhere, by the sea or in the middle of the forest, pre-Columbian cities stand imposingly, witnessing the grandeur of a civilization that today survives in the hearts and through the rituals of its descendants. The most famous being that of Tulum.

Until the 1990s, the place was still a kind of small lost paradise where one could find accommodation in small rustic and authentic huts on the beach, along which only a few houses were to be found here and there. Today, the eco-chic and bohemian seaside resort receives some 2.5 million visitors a year and there are more than a hundred hotels and restaurants along the narrow coastal path; in the high season, it can take up to two hours to walk the 6 kilometres... The hotels that have set up there are not imposing constructions, but often small, more intimate hotels with a New Age and trendy discourse (many New Yorkers in the area!), which have often shamelessly trimmed the beach and the forest: many efforts are now to be made on the part of the authorities to prevent all this from turning into a new Playa del Carmen or Cancún... The prices are based on North American consumer standards but you should know that staying in Tulum Pueblo (3 km from the sea) is much more accessible and not unpleasant: the atmosphere is less overrated and you have anyway access to the beautiful beach El Paraiso. El Paraiso is the strip of sand where it is good to spread your little towel to enjoy the Caribbean Sea, in all simplicity. Beach clubs and restaurants on the north side, heading towards the ruins (which, for their part, overlook another small beach, inaccessible on foot but by swimming if you are a strong swimmer)

A fortified city overlooking the sea, Tulum is truly a magnificent, unique port: it is the most imposing archaeological complex on the east coast, overlooking the Caribbean from the cliffs on which it rests. The pre-Hispanic name of this city was Zama, which means dawn, a logical name since its geographical location allows to observe the sunrise every day. Tulum, the name given to it when the city was already in ruins, is translated as "palisade", in reference to the three sides of the site which are surrounded by walls, with watchtowers at the corners; the other side is open on a cornice overlooking the sea.

Tulum reached its apogee in the late post-classical period (from the 1200s until the Conquest), when it was inhabited by about 8,000 inhabitants (200-300 of whom were privileged within the walls). The commercial activities were to be found in faraway regions: along the coastal coastal coastal shipping route which then linked Honduras to the central Altiplano via the Yucatán Peninsula. The city is representative of the Mayan "East Coast" architectural style, which is distinguished by its small buildings with flat roofs. Tulum is one of the few Mayan cities that were still inhabited when the Spaniards arrived.

For the visit, we enter the site from the west side, where we first come across the Casa de Chultún. Just opposite is the Palacio de los Frescos and then, in a northward direction, the Casa de las Columnas and the Casa de Halach Ulnic face each other; just after the Gran Plataforma is the Casa Noreste, almost glued to the wall. From here, towards the sea, we visit the Casa del Cenote, from which we access the Templo de los Dioses Descendientes crossing the Plataforma de los Caracoles; it opens the way to the famous Castillo, the most important building of the site. The small cove where to swim is located below, dominated by the Templo del Dios Viento.

El Castillo, the temple overlooking the bay of Tulum

El Castillo is the most imposing construction on the site, and also one of the most famous, those that appear on the postcards of the archaeological area, for its unbeatable position facing the Caribbean Sea. This building consists of a large staircase that leads to a temple in which three openings have been made. Some sort of oratories were annexed to each side of the staircase during the last stage of construction. This building was used both as a ceremonial temple and as a lighthouse to help orient ships as they passed through the reef.

The legendary cenotes of Yucatán

The area around Tulum has many cenotes, the famous natural underground swimming pools. Along the carretera Tulum-Boca Paila, going south towards Sian Ka'an, are the cenotes Encantado and Beh Ha. Around Tulum, on the road that leads to Felipe Carrillo Puerto, there are 2 cenotes: the Cenote Cristal and the Cenote Escondido, and towards the ruins of Cobá, there are 3 others: the Cenote Calavera, the Gran Cenote and the Cenote Carwash, so called because a few years ago they used to wash taxis there (fortunately this is no longer the case)! A good means of transport to go around the cenotes, and more economical than the taxi, is the scooter, or failing that the bicycle, since there are some very beautiful cenotes 4 km from the centre of Tulum.

The Cenote Escondido is a very good option for swimming. It is a completely open cenote, surrounded by trees and vegetation. The transparency of the water is such that you can see the fish swimming, as if you were in an aquarium. You can also play Tarzan and try a 2-metre jump from a rocky promontory overlooking the cenote.

The Cenote Labna-Ha only receives 30 visitors per day, so it is advisable to book on the web page above. The visit consists of entering with mask, snorkel and torch into the underground rivers that connect this beautiful covered cenote with 45 other cenotes in the area. A truly unforgettable experience!

The Cenote Yaxchen is a little marvel little visited, which looks more like a large lake surrounded by lush vegetation. We visit it to snorkel around it and discover the fish that swim in its exceptionally clear waters. One or two crocodiles live on its banks but we have no memory of them attacking anyone! Small wooden platforms have been set up around it, ideal for a cool picnic

The Gran Cenote is a superb natural well where you can swim in incredibly pure water. Its waters are turquoise blue and the cenote is open to the open air or covered with rocky walls, under which you can snorkel without the need to be an experienced swimmer. It is also possible to explore the corridors and bottoms of the cenote, diving with a tank, provided you are accompanied by a certified instructor. The place being particularly visited, it is preferable to go there at the opening.

When? The best season to visit the Yucatán Peninsula is undoubtedly between November and February. At this time it is warm and beautiful, but the temperatures are tolerable for traveling, while during the hottest months of the year - from March to June - one sweats profusely. Of course, you can also visit the peninsula during the summer, but expect a few showers. It's also good to remember that March is the time of the American spring break. At this time, the Caribbean beaches, mainly Cancún and Playa del Carmen, are invaded by raging North American students

Getting there. The flight time from Paris to Cancun is about 11.5 hours. 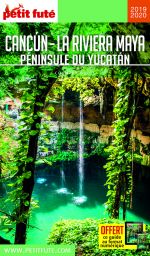 The dream places to go on holiday

When you think of rest, relaxation, it's hard not to think of yourself sunbathing on a beautiful beach of fine sand in ...

The best yoga destinations of the moment

A true art of living, yoga has many assets: it allows you to manage your stress while remaining attentive to yourself. ...

Katsushika : stroll in Shibamata and Tateishi in the heart of a retro and unknown Tokyo

With the presence of 23 vast districts, Tokyo cannot escape its reputation as a sprawling metropolis. The interest of ...