The Cyclades, a string of heavenly islands

Greece, its Parthenon and its heritage. Its old stones and its islands. All equally varied. The country has 6,000 islands and islets scattered across the Ionian and Aegean Seas, 227 of which are inhabited. The traveller will be spoilt for choice: crescent-shaped beaches stretching for miles or cute little coves. Pebbles, sand, golden or black, in volcanic areas. Farniente or culture. For these islands, like the mainland, remain the cradle of some of the oldest European civilizations (Cycladic, Mycenaean ...) divided into six archipelagos of which the Cyclades remain the best known.

An archipelago with a rich history

According to geologists, these islands were formed as a result of numerous earthquakes and volcanic explosions, after the separation of Asia Minor from continental Greece. Archaeological excavations have shown that they were inhabited as early as 6000 BC, but it was around 3000 BC that they developed a remarkable civilization.

Findings from Milos, Naxos, Syros, and Keros prove that during the rise of the Cycladic civilization, the inhabitants lived in organized villages, engaged in trade, fishing, and agriculture, and made vases, obsidian tools, and a wide range of objects that facilitated their daily life. The marble idols of Paros are nowadays distributed in different museums. Their schematic form is reminiscent of contemporary abstract art.

From the 2nd millennium BC, the archipelago was influenced by the flourishing Minoan civilisation (see the magnificent coloured frescoes). The explosion of the Thira volcano (around 1450 BC) marked the end of the Cycladic and Minoan civilization.

After the first millennium BC, the Ionians settled in most of the islands, which were organized into city-states. But the Cyclades experienced a new golden age after the seventh century, with the development of trade, the establishment of artistic workshops that produce objects such as amphorae of Milos, and the transformation of Delos into a major religious and political center. After 478, at the end of the Medieval Wars, the islands linked their destiny to that of Athens.

During the Byzantine period, the Cyclades suffered from pirate invasions and after the fall of Constantinople (1204 AD) they were dominated by the Venetians. The islands were distributed among the great families of Venice and placed under the authority of the dukes of Naxos. During this occupation, a large number of inhabitants of Syros, Tinos, Mykonos, Naxos and Santorini converted to Catholicism. In 1537, the famous corsair Barbarossa sowed terror in the archipelago and from 1617, one after the other, the Cyclades fell to the Turks.

During the Turkish occupation, the islands were given a special status which allowed them to build and arm ships to face the pirates. The capitulations between François I and Soliman the Magnificent also granted France the protection of the local Catholics. For a short period (1770-1774), the islands were subjugated to the Russians and, during the war of independence, they welcomed refugees persecuted by the Turks.

Today, the Cyclades are undoubtedly the most touristic archipelago in Greece. There are 39 of them, surrounded by countless islets, but only 25 of them are inhabited. Their dry climate, cooled by the meltemis, their superb architecture of whitewashed cubic houses, arcades, dovecotes and windmills, as well as their diversity, attract more and more foreigners. They appreciate the dry and arid landscape of grey, green or purple rocks, brightened up by a few olive trees and framed by a sea subject to the moods of the wind. Their inhabitants, fishermen, farmers, seasonal workers from Athens, often enriched by tourism, love to party. And, often, they also make good wine.

Culture, relaxation, lively parties, you are spoilt for choice

Nestled to the west of the Cyclades, this string of islands still escapes the "obligatory" tours of the Aegean Sea. And yet. Why not take a dip in the spectacular turquoise cove of Papafragas on the north coast of Milos, where the famous Venus of the Louvre was once displayed? Or isolate yourself on the small Kimolos, accessible by caïque from the northern tip of Milos, in Apollonia? Who knows the port of Chora, on the edge of the cliff, in Folegandros? What about Kea, a sort of wild paradise hardly known to foreigners, far from the overexcited atmosphere of Mykonos? The Greeks are particularly fond of the island of Sifnos, which has managed to retain its authenticity.

The central Cyclades, from Saint John to Antiparos, are the setting for the must-see sites of the Cyclades. Their popularity makes them extremely well served and ideal for tailor-made holidays. Why miss out on the sandy beaches of Paros and Naxos, the neo-classical architecture of the Cycladic capital or a festive trip to Ios in August? A la carte holidays, believe us. These are not the cheapest islands (in high season at least), but they are among the most popular, with the best facilities.

In the east, a walk and a sunset on the volcano, in Oia (Santorini), is not to be refused, as is a swim on the red beach of Red Beach. Each island cultivates its difference. Culture buffs will stroll along the terrace of the Lions in Delos. On the other hand (chronologically speaking), the Modern Art Museum of Andros, founded by Basil and Elise Goulandris in 1979, gathers the work of great Greek artists such as Tsachouris, Gounaropoulos, Bouzianis, Galanis, and others. Lovers of beaches and landscapes will choose Amorgos, the birthplace of Luc Besson's Big Blue. In festive Mykonos, you will also get lost between the whitewashed cubic houses, the windmills, and the pelicans (and of course the crowd, if you land in August...). To blend in with the Greek holidaymakers, choose Tinos, the island where the writer Vassilis Alexakis was born. Its beaches and side paths, not devoid of charm, are still preserved from foreign mass tourism and tour operators.

Finally, the small Eastern Cyclades, located between Naxos and Amorgos, are a great alternative for those who want to escape the touristy places and spend a few idyllic days between sky and sea. The sandy beaches are exceptional, the sea declines all the range of blues and transparency, and the cars are almost non-existent! You can explore these islands at your leisure by renting a sailboat or from Naxos by small boats. But more and more tourists are coming to the islands for day trips, especially to Koufonissia. Make your own programme!

When is the best time to visit? The best times to visit the Cyclades are May, June, September and early October. Before May and after the end of September, the boats connect the islands to Piraeus less often and many hotels and restaurants are closed, the local buses have different schedules. But this has its charm too...

Getting there. Usually, you stop over in Athens, before taking the ferry (or the speed-boat) or a domestic flight. Count between 200 and 450 € for a return ticket. 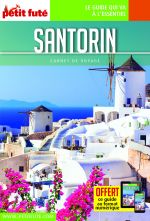 The Mediterranean Sea is full of treasures where it is good to land. So don't hesitate to board a Mister Ferry boat to ...

While most are now automated or inactive, lighthouses are historic monuments whose beauty continues to dazzle us. They ...

Top 10 most beautiful places to see a sunset

Who hasn't wanted to spend an evening, stop everything and let themselves be carried away by the rhythm of nature? ...

Santorini, the romantic pearl of the Greek Islands

Often considered one of the most beautiful islands in the world, it is certainly the pearl of the Greek islands and the ...