A faraway land 7,000 km from Paris which is reached after about 8 hours of flight, and yet so close, especially for French people coming from metropolitan France. You will find all the French infrastructures, the same language, the same currency... all punctuated by exoticism and a privileged climate. The Guadeloupe archipelago offers the traveller a dose of adventure or relaxation. And incredible Carnival celebrations on Sunday of the Epiphany as of February 26th this year. Let yourself be tempted!

Of all the "Lesser Antilles", the archipelago of Guadeloupe is the most astonishing for its variety of landscapes. A seaside destination par excellence, Grande Terre, with its crystal-clear water beaches, delights lovers of lazing around in the sun. In the coral bottoms, the diving spots are multiple, and even beginners, with mask and snorkel, can enjoy the underwater spectacle. It is from Grande-Terre that we get the postcard images of Guadeloupe: white sandy beaches lined with coconut palms, turquoise sea... But outside the seaside resorts, by following the blue lagoons, one discovers superb corners of wild nature, vertiginous coasts with imposing limestone cliffs, agricultural campaigns, active villages and of course Pointe-à-Pitre, the sub-prefecture. A diversity of landscapes which contributes to its fame, even if the dry climate imposes a vegetation much less luxuriant than in Basse-Terre. In the hinterland, known as the Grands Fonds, small winding roads lead from Les Abymes to Saint-François and back through the lush green mornes. You can venture there without risk of getting lost as the roads are now signposted. Obey the speed limit as you will encounter areas of diffuse habitat and schools and some residents tend to think they are alone on these small roads. Most of the major hotel chains, casinos, water sports and festive activities are centred on Le Gosier, Sainte-Anne and Saint-François, which some tourists would not leave for anything in the world

But Mother Nature has many other surprises in store for you. Large and small wild coves for budding Robinson, lush rainforest, vertiginous waterfalls, rivers with refreshing waters, volcanic lands, high limestone plateaus, steep cliffs, fragile and mysterious mangrove swamps... A biodiversity that promises unique sensations. The future of ecotourism in Guadeloupe is its preserved natural territory located mainly on the Basse-Terre which causes a real craze among hikers and nature lovers! Higher than Grande-Terre, it appears like the other wing of Guadeloupe and everything, more or less, is different. Due to higher rainfall (the clouds linger on the Soufrière!), the vegetation is lush, especially in the largely protected area of the Nature Park, where there are many hiking trails in the rainforest, and where waterfalls and wild pools delight the most hikers. Pebble beaches, large coves of black, brown or pink sand and the seabed, from Pigeon Islets to the Grand Cul-de-sac marin, attract lovers of a wild coastline. Basse-Terre is home to an active volcano, the terrestrial heart of the Guadeloupe National Park. Classified by Unesco in the world network of biosphere reserves, this side of the island is a paradise for ecotourism, and is particularly interesting for its offer of atypical accommodation and lodgings well integrated into nature. If Guadeloupe evokes for you only white sandy beaches and coconut palms, you will be surprised by this unexpected part of the archipelago. Bring your hiking boots and open your eyes wide!

But to discover the rest of the archipelago, nothing beats the boat. Les Saintes, Marie-Galante, and La Désirade are just a few hundred miles away and they are in no way alike

Marie-Galante, made famous by the song of Laurent Voulzy, offers magnificent landscapes (its lagoons and beaches are among the most beautiful in the Lesser Antilles), many traces of human and agricultural history, and also a certain art of living, authentic and simple, linked to insularity and its conditions of existence, both rudimentary and tranquil

In the south of Guadeloupe, the archipelago of Les Saintes has nine islets. Proud of their islands, the inhabitants do everything to preserve them. While the boats dump their stream of tourists early in the morning, the majority of them leave in the evening, allowing the islands to breathe and regain their calm rhythm

Finally, 45 minutes by boat from Saint-François, the Désirade stretches out in a long rocky strip in the middle of which stand the Grande Montagne at 276 metres and the Morne souffleur at 207 metres. This part of the island seems to have been created for hiking! To the south, the coral reef surrounds a string of beaches planted with coconut palms with calm and clear waters

Carnival, which will last from Epiphany Sunday to February 26 this year, is the archipelago's most important festival. It is the most unifying party of the year, capable of getting the whole island moving! On the Sunday following the Epiphany, the festivities begin and last until Ash Wednesday. Days and nights follow one another in frenzy and joy.

Costumes compete with inventiveness. It is said that, after Rio de Janeiro and Louisiana, the parades of Pointe-à-Pitre and Basse-Terre are the most elaborate. A fairy tale show! Specialist shops and garment shops are busy from the beginning of the winter season. From the romantic to the modern, including the sexiest, the naive tinkerer is often the tastiest. But surely, the clothes of rhinestones and light of each commune will shine for the time of a parade. Everyone gives free rein to his imagination through shimmering disguises, playing his role a little better each day, ensuring his own staging ... Carnival is a period of great release, the ultimate outlet for differences. These weeks, Blacks, Whites, Coolies, Békés or Mulattoes evolve under the mask of anonymity. And as in the férias in the South of France, you can release your desire to be together.

The three most important days of the carnival each have a dominant colour that is found in the people's disguises. This encounter of masks and costumes takes place within the framework of a musical and rhythmic intrigue. It is Vaval, king of the party and a mythical character, who embodies the idea of licensing. His effigy will be burned at the end of the event to signify that the party is over. Of course, radio, television and the Internet then take over and broadcast a kind of anthem, usually a hit with explicit lyrics, which breaks all audience records.

A year of waiting, a quarter of preparations, a month of Miss Carnival elections in most communes, a week of festivities and popular jubilation! Unmistakable!

When? Guadeloupe has two distinct seasons and enjoys a tropical climate. Metropolitan winter is the most pleasant season with temperatures around 27°C. In the summer, the thermometer is easily over 35 °C. As a result, the high tourist season runs from December to early May.

It's good timing, the 2020 carnival is scheduled from Epiphany Sunday to February 26th this year.

Getting there. Count eight hours of flight time between Paris and Pointe-à-Pitre

Useful. In order to best prepare for his trip. 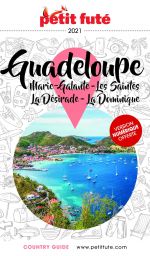 A few hours by plane from one climate to another, lazing on a heavenly beach, wandering in the most beautiful museums in ...