Milan, for a cultural, gastronomic and shopping getaway

While Italy has relaxed its measures against the Covid-19 by opening museums during the week and restaurants and bars until 6pm in particular, it is possible to cross the Alps to enjoy the small Italian pleasures as in Milan. If the Lombard capital maintains the myth of a classic Italian city, it is nevertheless one of the international capitals of fashion and design that makes Paris and New York shudder. But that's not all. Culture and history, shopping, gastronomy... like no other, Milan has the gift of combining tradition and innovation with a natural charm that appeals to all generations from all walks of life. Let yourself be surprised by the creativity of what Stendhal called " la city parfaite " !

Visits that are not to be missed, between history, culture and architecture

Looking at a map of Milan, you will be irremediably attracted by the geographical and symbolic centre of the city, Piazza del Duomo. Milan develops in circles around this central medieval nucleus and it is indeed through the spectacular Duomo that you will be advised to begin your discovery, art and shopping combined. As you contemplate this impressive interlacing of gargoyles and Gothic white marble statues, your eyes are drawn to a luminous point, the Madonnina. Symbol of Milan, this statue of the Virgin in gilded copper announces the ballet of sparkles in the neighbouring shop windows... As you cross the square, you are caught by other sparks, those of Europe's first shopping mall, the Victor-Emmanuel II gallery. Imposing, but light, the iron structure topped by a glass roof covers what used to be called the " le lounge of Milan ", where all the good society used to meet at the end ofXIXe siècle. Time has passed, but the passage brews as many socialites in the surge of its glamorous shops

However, it should not be forgotten that Milan is one of Italy's greatest cultural centres. Its rich past has left us a legacy of masterpieces such as Leonardo da Vinci's Last Supper and Michelangelo's last Pietà. The city often offers a rich calendar of cultural events. Operas, ballets and concerts, exhibitions, events related to design and the world of fashion... This wealth is spread throughout the region. From the Sacro Monte of Varese, to the treasure of Queen Theodolende in Monza, to the splendid villas on Lake Como, Lombardy reveals a surprising artistic heritage. The architectural beauty of cities rich in history such as Mantua and Bergamo has nothing to envy to that of Tuscan or Venetian cities. A heritage that is also expressed in a craftsmanship and culinary know-how that has been handed down for generations

Milan is the city of elegance and fashion par excellence, an obligatory stopover for all fashion victims and shopping enthusiasts. Its walls and streets are filled with references to Armani, Versace, Gucci, Valentino, Prada, etc. Here, luxury is visible, and Milanese people of all ages are always on the cutting edge of novelty, with respect for good taste. Clothing habits will immediately seduce the visitors who are most sensitive to the latest trends. Conclusion: in Milan, clothes make the monk. This is what has made the Lombard capital, one of the undisputed fashion capitals, an international meeting place for fashionistas. An art of living (or better "an art of dressing") that easily extends to the rest of the region. Let's not forget that from the 16th to the middle of the 20th century Como was one of the most important centres of production of precious silks in Europe.

Trendy places, where Milanese youth, designers and creators from all over the world meet, are multiplying at such a speed in Milan that, in addition to the unmissable and unstoppable institutions, the addresses are constantly changing. Milan has been, is and will remain a laboratory for all the new trends. Music, cinema, theatre, sport... All tastes being in the nature, one is normally spoilt for choice. However, the Lombard capital alone is far from attracting all those in search of entertainment. In season, the mountains and lakes are transformed into a sports paradise offering a wide range of activities. Ski resorts such as Bormio and Livigno, unfortunately closed to the general public this year, now enjoy a reputation that extends beyond national boundaries, while in summer the shores of Lakes Garda, Como and Maggiore attract water sports enthusiasts.

During the day, restaurants are open until 6 pm. An opportunity to enjoy the richness of Italian cuisine, especially from Lombardy. Here, the cuisine is of great diversity, even if it does not have the refinement of some of the neighbours. But this does not prevent it from having offered the grateful world some famous recipes, such asosso buco (cooked veal shoulder), risotto alla milanese or panettone. And the region produces several DOC wines of all kinds, from reds to grappa. Among these is amaretto, a Saronno almond liqueur. Bon appétit!

Milan, a good starting point for other trips

Because Milan is a convergence point for several transalpine transport routes, such as the Simplon and the Gotthard. Crossed by the Navigli, ancient canals now buried in the city centre but still visible in the south of the city, Milan offers a wide variety of routes to be covered on foot, by bicycle and by car.

The city is therefore a privileged starting point for a visit not only to Lombardy, whose varied nature is a considerable attraction, but also to the rest of northern Italy. The lush green Brianza, the Adda region with its rich historical past, the Ticino region where one of the most beautiful parks in the area is located, and the lake region are excellent examples of the walks that can be undertaken from Milan.

When? Milan is visited all year round

Go there. Lombardy is served by two international airports (or even three with Milan-Bergamo for some low cost), the most important of which is Malpensa. Linked in 40 minutes to the city centre by the Malpensa Express train, this airport is the gateway to visit the Great Lakes and the Alpine region. Milan is served by four metro lines and a network of 195 buses covering all the districts and areas bordering the city 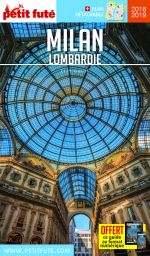 From its gastronomy to its exceptional landscapes, Italy never ceases to enchant travellers from all over the world. The ...

Sometimes unusual, the lucky traditions identified in this article tempt most travellers, superstitious or not. From ...

Every year, it's the same ritual. January is expected by all shopping enthusiasts: the sales are back! It's time to ...