This gallery is the jewel of the museums of the Republic of Macedonia. It brings together only about sixty icons in two rooms. But this is a selection of the most precious and striking images from Ohrid's school. Painted from the 11th to the 19th century, they represent the "best of" of the 800 Byzantine and post-Byzantine icons that remain in the region. Before the visit, you can also read the box "Meaning of the icon".

second room, in the basement, opened in 2017, contains recent icons and liturgical objects. It is of limited interest. But the main room, on the ground floor, contains the thirty-six most precious icons. These are presented in chronological order. As these are masterpieces of oriental religious art, it is common for some to be absent, as they are temporarily loaned to foreign museums for the duration of an exhibition. Here is our small selection.

Forty redfish martyrs - Date: 2nd half of the 11th century - dimensions: 43.5 x 33 cm. It is the oldest representation of this type in the world and the second oldest icon in the gallery after that of Saint Basil the Great and Saint Nicholas (no. 272), which dates from 1045/1055. Painted for Ohrid's Saint Sophia Cathedral, it illustrates the martyrdom of forty Christian soldiers from the Roman garrison of Melitene (now Malatya, Turkey). They were killed on the frozen lake of Redfish (now Sivas) during the winter of 320 by order of Licinius, who then ruled the eastern part of the Roman Empire. They were promised a hot bath if they gave up their faith. Two of them accepted, but two other soldiers, suddenly converted, joined the torturers who all died in the cold of the night. The forty martyrs were canonized: their haloes appear well arranged horizontally in the upper part, under Christ in a half erased medallion. This episode is quite frequent in oriental iconography. It strikes by the force of conviction and stoicism of the martyrs. But it is above all politically important. Because the four associated Roman emperors had reached an agreement to stop anti-Christian persecutions. The Redfish episode was then used by Constantine as a pretext to go to war against Licinius, seize the entire Empire and become the champion of Christians. Constantine then created Constantinople, was the first Roman emperor to convert to Christianity and became (unknowingly) the founder of the Byzantine Empire.

Annunciation (two icons with ricea) - Date: beginning of the 12th century - dimensions: 111 x 67.5 cm (each). Very famous, this diptych comes from the neighbouring church of Mother of God-Perivleptos and bears the inscription of the name of its patron, the Archbishop of Ohrid Leon II Mung (1108-1120). It illustrates the announcement to Mary of her divine motherhood by the Archangel Gabriel. Each of the two characters is painted on a different support whose background and edges are covered with a superb riza. This protection made of repelled metal is used here to "paint" the haloes, the background with vegetal motifs and the holy figures on the sides. Thus, around Mary appear her parents Joachim and Anne, Christ, Saint John the Baptist and various saints and prophets. Marie's raspberry red maforii is held by two semi-precious cut stones.

Christ pantocrator (with riza) - Date: 1262/1263 - dimensions: 134,5 x 93 cm. It is the oldest icon in the region with an exact date: the year 6771 of the Byzantine calendar, inscribed on the reverse, which corresponds to 1262 or 1263. Behind it is also the name of the sponsor, the most learned of Ohrid's archbishops, the Greek Constantine Kabasilas. Intended for the church of the Mother of God-Perivleptos, it represents the "all-powerful" Christ (pantokrator in Greek) draped in blue and gold with a halo made of a hammered and gilded rice. The proportions are not realistic: the shoulders are too narrow, but this allows the painter - anonymous - to highlight the face and hands. The right hand, in particular, with two fingers stretched out, symbolizes the double nature, human and divine, of Christ.

Mother of God Hodegetria (with riza) - Crucificxion of Christ - Date: 2nd half of the 13th century - dimensions: 95.5 x 65 cm. This icon painted on both sides was created by two of the greatest medieval artists of the Balkans, the Greeks Michailis Astrapas and Eutychios, to whom we owe in particular the frescoes of the nearby church of the Mother of God-Perivleptos. On the front: the "Virgin Leader" or Mother of God Hodegetria (from the ancient Greek odigeo which means "I drive" or "I guide"). The painting is completed by a riza with hammered halos and a filigree background. On the back: Christ's crucifixion with the Virgin and the apostle John. The gallery has two other two of these "double-sided" icons that were intended for processions, one of which, magnificent, was painted at the beginning of the 14th century, showing the Annunciation and, on the front, the Mother of God Psychososostia ("Saviour of Souls").

Saint Clément d'Ohrid (icon in relief) - Date: end of the 13th century - dimensions 140 x 35 cm. The gallery displays several icons representing the great bishop of Ohrid. But this one, placed in a corner of the main room, is unique. Although it is similar to a wooden statue, it is in fact a "relief icon", a type of icon very rare in Byzantine art. This one comes from the Church of the Mother of God-Perivleptos and it is the only one of its kind in the Republic of Macedonia.

appearance of relief icons in the 13th century could be linked either to the first engraved wooden iconostases or to Western artistic influence after the capture of Constantinople by the Latins in 1204.

Sainte Marine and scenes from her life - Date: c. 1754 - dimensions: 92.5 x 60.5 cm. It is one of the most striking icons in the gallery. It was made by Constantin de Shpat, master of the Berat school. The saint, known in the West as Marguerite d'Antioche, died a martyr in 305. As in another icon in the gallery (No. 158), she is traditionally depicted brandishing a hammer to kill a demon and/or dragon. Twelve vignettes represent the scenes of his life (temptations of the devil, appearance of the dove of the Holy Spirit, etc.) and his martyrdom. Perpetually subject to temptation, she took a vow of chastity. But for having rejected the advances of the Roman governor Olybrius, she was tortured and put to death. What is interesting is that the Romans are all represented here as Ottomans, with Olybrius in Pasha uniform. An anachronism that is probably very deliberate.

Mother of God Panton Chara - Date: 1844 - dimensions: 57 x 41 cm. It was made by Dico Zograf, great mijak painter from Tresonče (Mavrovo), for the church of St. John of Kaneo. It belongs to a particular sub-category called "Joy of All" (Panton Chara in Greek) related to the icons of the "inflectable rose" (evocation of virginity). The child Christ put on the orange-orange outfit of the high priest. The inscriptions are written in both Greek and Old Slavonic. At the bottom are six portraits of saints. The last on the right bears the red Arabic fez adopted in the Ottoman Empire from the 19th century. It also features an embroidered waistcoat and fustanelle typical of the Greek-Albanian region of Epirus. This is the neo-Martyr Saint George of Ioánnina (in present-day Greek Epirus), killed in 1838 for having renounced Islam and converted to Christianity.

transport
accommodation
Stays
On the spot
4.5/5 (2 notice)
Share on 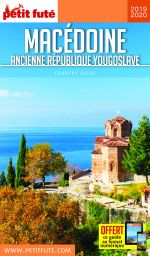