In the heart of the Alsace vineyard and nestled at the bottom of a vine lined valley, Riquewihr is rightly considered as one of the most precious pearls of a region that is already little short of wonders. Nicknamed the pearl of the vineyard, this fortified town, whose origins date back to the High Middle Ages, offers the walker magnificent 16th and 17th century residences, Renaissance houses made of dressed stone such as half-timbered bourgeois houses, beautiful inner courtyards and galleries, old wells and fountains, and centuries-old cobblestones. A heritage that still lives on, enlivened by the wine-growing activity introduced 2,000 years ago and which, even today, is still making the prosperity of a town, while relying on an important tourist windfall, illustrated by the main street, a long corridor giving direct access to taverns or narrow streets. Property of the Count of Horbourg, Riquewihr has been surrounded by walls since 1291. In 1397, by marriage, the county of Montbéliard passed to the house of Wurtemberg. Thus, Montbéliard, where the regency was located, and Riquewihr remained together until the Revolution. From 1526 to 1529, it is the Austrian domination. The Reformation is introduced in 1534 by Count Georges de Wurtemberg. Two years later, the Latin school is opened, and in 1540, the castle being rebuilt, Riquewihr becomes a seigneurial residence. In the 17th century, the inhabitants experienced a period of prosperity, bequeathing us beautiful residences. Riquewihr, which embraces revolutionary ideas, will be attached to France in 1796. During the last war, when several localities in the surrounding area were completely destroyed in the winter of 1944-1945, Riquewihr was relatively spared, despite the proximity of the front and artillery fire. The geographical situation and the refusal to introduce lesser quality grape varieties explain the value of the local crus: fragrant muscat, noble gewurztraminer, and finally riesling with an insoletely fragrant bouquet come from the various sunny hillsides. Riquewihr has two grands crus: the Sporen and the Schoenenbourg, whose plots can be seen by following the Grands Crus wine trail. This path, which starts near the Tour des Voleurs, and a vineyard path, which crosses these two slopes from west to east, allow you to take in the vineyard and the old town, with its towers and gables. A real gem to be visited on foot, strolling through the pedestrian and cobbled streets, the village is to be discovered as a whole, so harmonious and attractive is it. The main street, rue Général-de-Gaulle, as well as rue Saint-Nicolas, rue du Cheval, rue Latérale and rue des Remparts have superb old houses. The rue des Juifs leads to the Cour des Juifs, a former ghetto, from where the Tour des Voleurs (museum) can be accessed. For in addition to its architectural beauty, Riquewihr has no less than five museums. A record for a city of 1,200 inhabitants. It would be tedious to make an inventory of all the historical treasures of the city, but don't miss the superb old houses, half-timbered houses, wells, galleries that animate the facades, oriels or courtyards that sometimes hide wonders, each architectural or historical element is briefly described by glass plates affixed to the walls. In addition, the tourist office offers free tours of the old town from the end of June to the beginning of September.

The must-see places in Riquewihr

Prepare for your trip Riquewihr 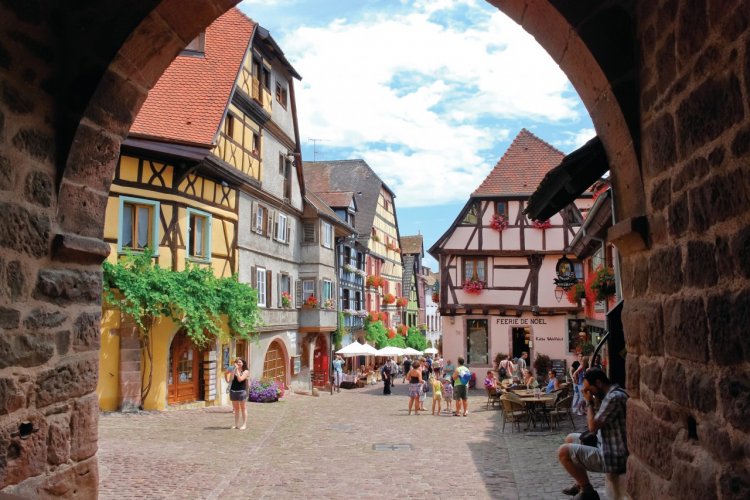 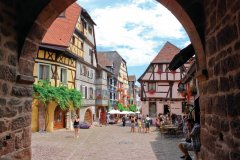 The most beautiful villages of France punctuate many roads in France by their remarkable beauty. They are the witnesses of the diversity of our territory, but also of our history. Perched to better defend themselves, perched on a cliff, open to rivers, set in the middle of the countryside, they meet very specific beauty criteria to be included in the label. And if for your next escapade in France, you would like to go for a stroll in its ...

Top 10 of the most beautiful villages (and towns) in Alsace

On the French-German border, Alsace offers a wide range of tourist activities. Its villages and towns are renowned for their originality and beauty in all four corners of the globe: half-timbered houses with a medieval look, wells and window sills full of flowers, ancient legends and a warm atmosphere. Lost in the vineyards of the Grands Crus, they offer singular landscapes and heritage, which will have no difficulty in seducing you, whether ...

For the Japanese, the most beautiful village in France is...

The small village of Alsace, Riquewihr, has become the emblem of France in Japan! A source of pride for the village mayor! The 400 voters who, after visiting many communes anonymously, must have been seduced by the great wine estates but also by the picturesque medieval town and the mythical half-timbered houses that are the pride of the Alsatians. The president of the Japanese association JATA came to present this award. This town of about ...

Top 10 of the most beautiful villages in France

The most beautiful villages of France punctuate many roads of the Hexagone by their remarkable beauty. They witness the diversity of our territory, but also our history. Perched to better defend themselves, hung at a cliff, open on rivers, laid in the countryside, they meet specific beauty criteria to integrate the label. Small tour of France to discover the stones, the men and our heartstrokes.