Situated in West Flanders, Roeselare has all the assets for a pleasant Belgian getaway. A city on a human scale, it's good to stroll through its city centre and admire its interesting architecture. Roeselare is also a Belgian highlight for a whole range of activities: shopping, cycling and gastronomy, Roeselare, like many cities in the country, has the art of slowing down time to simply enjoy the pleasures of life. These are the main reasons to stop off in this city that combines charm and dynamism. And to get the visit off to a good start, drop by the tourist office at 15 Polenplein for a map of the city and all the good tips on walks in the region.

As is often the case in many parts of Northern Europe, cycling is a real institution in Roeselare. Once you have gathered all the information you need to visit the city, don't miss a visit to the Koers, the Museum of Cycling, which is housed in the same building as the tourist office and traces the history of this sport and its link with the city. It also serves as the starting point for a 30 kilometre tour of the important places in the life of Jean-Pierre Monseré, the 1970 world road racing champion who died in the middle of the race in 1971 at the age of 22

Later in the day, if you're passing by the station, don't hesitate to rent an eco-bike to explore the city. There are many signposted routes that allow you and your family to ride in peace and quiet and see how well the city has combined urbanity with green spaces. In the very heart of the city, it is advisable to head for the port district of Kop van de Vaart, where many artists have transformed old industrial buildings into a sanctuary for urban art

But the advantage of cycling in Roeselare is also that you can get off the beaten track and escape for a few moments on paths that lead to various curiosities. For example, you can start on the route that leads to villages with beautifully preserved chapels such as Oekene, before heading for Rumbeke Castle, the oldest Renaissance building in Belgium, recognisable by its red bricks and imposing appearance. Just a few minutes away is the post-war velodrome of Odiel Defraeye, open to cyclists and built after the First World War by the man who was the first Belgian to win the Tour de France in 1912.

Stroll in Roeselare, between heritage and shopping

What better way to soak up the atmosphere of Roeselare than to go for a stroll where you take the time to contemplate the architecture and enjoy yourself when you enter the shops? After walking to the foot of the belfry of the City Hall and climbing up the steps of the Saint-Michel tower to enjoy a sumptuous panorama, it is time to enjoy a city that is often compared to a large open-air shopping centre. Indeed, Roeselare is one of the most pleasant shopping cities in Flanders. There are plenty of opportunities to redesign your wardrobe with trendy boutiques and also shops with designer furniture and decorative objects to add a touch of originality to your interior. Are you a fan of vintage? Don't miss the Curieuzeneuze shop, where furniture and decorative objects from other eras rub shoulders, but which we know make the charm of today's homes. For those who want to enjoy a weekend or a family holiday, the town is also thinking of everyone by providing strollers for parents who want to wander through De Munt in peace and quiet along the cobbled streets

Like any shopping town that wants to make its offer available to residents and visitors alike, several events are organised. For example, on Fridays, a local market is the perfect opportunity to taste products directly from local producers (pancakes, yoghurt, pastries...), and with the arrival of fine weather, various events are planned. Thus, at the end of April, a nocturnal market allows you to go shopping until 10 pm between two musical interludes, and in June the unmissable Batjes are held, 4 days during which shopping mixes with festive moments around the street arts, all with a drink in hand, since a giant Rodenbach barrel is placed on the Grote Markt to the delight of passers-by

Roeselare, a stage of character for gourmets

Strolling through the cobbled alleys of Roeselare, taking a ride on one of the many bike paths will not fail to whet the appetite of visitors at any time of day. This is a good thing, as the city has a wide range of choices in this area. The city has many remarkable addresses. Among them is Bistro Le Nord, right in the city centre, where dishes offer a delicious mix of the new and the familiar, for a resolutely creative cuisine. At another time, we settle at Gastro Henri's for a taste of the various tapas and grills. And then the fine taste buds have the opportunity to discover a double starred place called Restaurant Boury, a chic place that from starter to dessert never ceases to surprise fine gourmets, with surprising combinations of flavours and high quality products. The culinary offer of Roeselare suits every budget and everyone can indulge themselves

It is not possible to end this article without mentioning another flagship product in Roeselare: beer. And to discover some of the best products, you have to go to the prestigious Rodenbach brewery. The family of the same name acquired it in 1820. This brewery brews three marvellous beers, Alexander Rodenbach, Rodenbach Grand Cru and Rodenbach, revealing all the richness of a heritage of which Belgium is proud. To get interested in this emblematic place, you have to start by taking a tour, to understand how it is made, to dive into the heart of an ancestral know-how and to discover the century-old barrels in which the beer is kept. Not forgetting, of course, the tasting times! The breweries are like a heritage in their own right in Roeselare, and many other addresses enrich the offer. For example, you can also taste a Roeselaarse Tripel at Bram's or listen to the stories of how Bert makes beer at the BOM brewery. Finally, in the middle of the city, a building often catches the eye and deserves to be looked at. This is the ARhus Knowledge Centre, a contemporary monument in which you will find the city library and which also relates the making of beer. And it is still in this cosy setting that you can also take a seat to discover dishes that praise the local gastronomy, always over a good beer, it goes without saying. 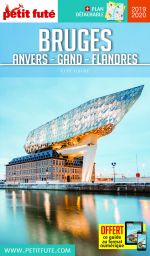 Albi is of course its Episcopal City, listed as a UNESCO World Heritage Site, but not only that... From Casteviel to the ...

Imagine the delicate smell of smoke coming from your Grillchef 11503 barbecue when you put your grills on it. You can't ...
Read the article

Alsace, rich in its very special history and the traditions that make up its personality, proud of its Rhine culture and ...
Read the article
Review