Going south out of Ambo (at the Jebatna Metcha hotel), a track crosses large agricultural plains, offering beautiful shows of peasant life during the harvest period (October/November), before attacking the ascent of the volcanic formation of Mount Wenchi.
After about 25 km, after the bend that opens on the west side of the volcano, a stop is required. A small raidillon leads, a few meters above the ridge, to the crest of the ridge from where one enjoys a grandiose view of the entire caldera of the volcano. Below the lush green slopes of the crater, which rises to 3,386 m, glisten the limpid waters of a sinuous lake, part of which is lost in the back of the hills. At its centre is a small wooded island from which the multicoloured roof of the church of Wenchi Chirkos, founded between the 13th and 15th centuries in different versions, stands out. Continuing along the track, we come to a small village of recent construction. It is from here that the expedition to the shores of the lake at the bottom of the crater begins, 4 km below. Halfway down, a path on the right leads to natural hot springs. While the main path is winding, it is amusing to note the many small steep paths taken by the tireless children who climb up like real cabri to the village school. As the slope becomes gentler, the houses surrounded by a few cultivated ares become more numerous, then it is a real small village of 2,500 souls, all Oromo farmers, mixed with the plantations of false banana trees that we cross. From there, it is possible to get a passage by boat, or on a more rudimentary boat, to the island (50 birrs/person) located a few fathoms away.
Outside office hours, the islet flanked by the church of Cherkos is a true haven of peace where one can consider organizing a picnic stop. If the descent is a pleasant stroll, some people will probably be tempted to go up the slope on horseback. 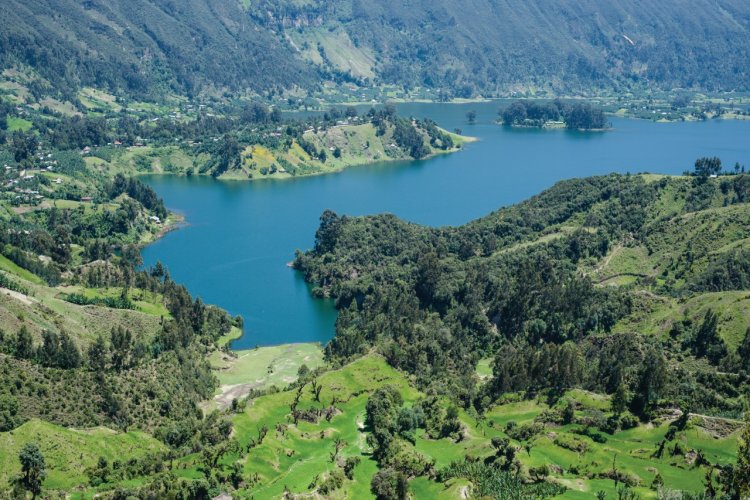 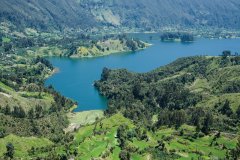