In two months' time, festive lights and decorations of all kinds will invade Europe. Christmas is slowly but surely approaching and brings with it his fairy tale to the continent's major cities. An unmissable highlight of the Advent period: the Christmas markets, a German tradition born in the 14th century. So don't wait any longer and go get your tickets to discover them in November. To help you choose, a brief overview of the most beautiful Christmas markets in Europe.

From 23 November to 23 December, the Stuttgart market invaded the centre of the German city to transform it into a festive event. In total, more than two hundred stands with a unique design are set up on Schlossplatz. Strolling through the aisles is discovering specialities such as the famous hutzelbrot, a bread made with fruit and spices. Music lovers will appreciate the Christmas concerts given on the steps of City Hall and in the inner courtyard of the old castle. For the little ones, head for the living crib and the DIY and painting activities. The most creative will be tempted by the candle workshop or the famous chocolate fondue.

As has been the case every year since 1570, the main city of Alsace has welcomed more than three hundred chalets since 25 November. The most visited Christmas market in France and one of the most beautiful Christmas markets in France, it invades eleven sites and squares in Strasbourg until 31 December. If the main stands are, as always, located in the famous Broglie Square, all have only one goal: to showcase craftsmanship. Visitors take the opportunity to taste Alsatian specialities such as strudel or kouglof. If you don't want to go to the pastry shop, head for the chalets on Place d'Austerlitz to taste mulled wine and other typical regional specialities.

Since 1393, Germany's oldest Christmas market in Frankfurt has welcomed millions of visitors from all over the world every year. From November 25 to December 23, the Paulsplatz will be covered with its most beautiful sets and some 200 stands. The latter even extend over the Römerberg and the banks of the Main. Guided tours of the Christmas market are offered under the theme "mulled wine, stories and pastries". It is to the rhythm of concerts, brass ensembles set up on the balcony of the church of Saint-Nicolas that visitors wander about. The city plays the seduction card with a giant 30-metre high Christmas tree, accompanied by chimes.

The quality of its products and the beauty of its decorations make it one of the most popular Christmas markets in Alsace. A real open-air museum, the city of Colmar will be planting its four Christmas markets on 25 November. The opportunity to discover, until 31 December, the historical treasures of Colmar, mulled wine in hand. Head for Place Jeanne d'Arc and its regional specialities such as pastries and delicatessen. The Place des Dominicains opens its arms to local traders. Not to be missed: the fifty chalets in the Old Customs Square, the Craft and Antiques Market in the Khoifhus Palace, the Children's Market in Little Venice

It attracts 900,000 visitors each year. From November 18th, Lille will be dressed in its most beautiful Christmas lights. On Rihour Square, more than eighty chalets will be invited to the celebration. Until December 30, Northern craftsmen and traders come to offer regional products. The rest of the world is also part of the party as Lille invites producers from all over the world. Some of them come from Canada, Russia, Germany and Poland. Decorations, santons, waffles, mulled wine... without forgetting the famous gingerbread. There is something for everyone! For lovers of the city, head for the Giant Ferris Wheel. Located on the cobblestones of the Grand'Place, it culminates at 50 metres high, enough to admire the festive lights of Lille.

Krakow is Poland's most important tourist destination and also has the most beautiful Christmas market in the country. From 27 November, the traditional Market Square (Rynek Glowny) will offer visitors handicrafts and jewellery made of Baltic amber. Until December 26, gastronomic specialities such as Polish sausages and warm beer will awake your taste buds. The magical Christmas atmosphere reaches its peak with the choir of Christmas carols and folk dances. If the snow is there, the whole Christmas market changes its atmosphere. Under his white coat, he is more mysterious and above all romantic.

To respect the ancestral tradition of the Christmas market, Vienna, the Austrian capital, welcomes several of them. The most authentic and important one is held in the Town Hall Square (Rathausplatz). In the Volkshalle, the youngest can decorate their gingerbread rolls and do crafts. The Christmas market of the Enfant Jésus will welcome about a hundred chalets and attractions from November 18th. On the program: the culinary delights of Christmas and the charm of local craftsmanship. Other markets such as the Christmas village in Maria Theresien Square will be awakened by gospel choirs and music groups. Until January 8, you can even enjoy two curling rinks.

Light show guaranteed! Called "Winter Pleasure", the Brussels Christmas market offers a multitude of activities for young and old every year. This year, some cottages are moving into the Black Tower, behind Sainte-Catherine Church. The products offered are straight out of Quebec. A perfect detour to the Place de la Monnaie and its giant 740 square metre ice rink. Not to be missed: the sound and light show on the Grand' Place. More than two hundred and fifty chalets offering delicacies and local products, a whole small village is set in motion on November 25. Until January 1st, let's go to the activities such as the Ferris wheel and the gigantic fir tree on the Grand' Place.

Switzerland's largest city cannot escape the traditional Christmas market. To impress, Zurich is installing its Christkindlimarkt in the main station as always! Europe's largest covered market, the 150 chalets warm hearts. In addition to traditional mulled wine and regional specialities, Zurich's Christmas market has its treasure: its Christmas tree. For twenty years, the tree has given the central station a magical, timeless character. From a height of 15 meters, it is entirely decorated with more than 5,000 Swarovski crystals. A show not to be missed. To receive glitter in your eyes, visit the lobby from November 24 to December 24.

Mountain lovers, spend the Christmas and New Year holidays in Innsbruck, Austria! The most important city in Tyrol will transport you to its Christmas fairytale on 15 November. Its market, at the foot of the Petit Toit d'Or, is surrounded by snow-covered mountains. A timeless show that is worth the detour on its own. Until 23 December, the 180 stands will awaken the senses with their gingerbread, mulled wine and traditional Tyrolean cheeses such as graukäse, all animated by a giant crib. The eyes of the youngest will shine through the puppet and doll theatre.

1 /
To be read next:
10 ideal destinations for travelling with children in Europe
Top 10 Czech castles and chateaus to visit in winter
Top 10 best apps for learning English
Top 10 places in France where you might think you're abroad
Top 10 most popular French ski resorts
Top 10 most beautiful villages in Europe
10 of the best shopping destinations in Europe
The 10 best cities to go abroad in
The 10 most beautiful train Stations in Europe (we would almost like to miss his train!) 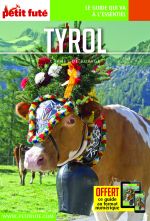 Lying at the foot of the Carpathian Beskids, on the left bank of the Vistula, Krakow is the "heart" of Poland, often ...

The wood air bonus for better heating and less pollution

Nadji Meziane, project manager at ALEC, is passionate about energy and environmental issues and explains why and how to ...

On September 7, 1822, Brazil proclaimed its independence. The anniversary of this day has become a national holiday and ...