A guide is at your disposal and there are some good books on the German occupation and Serbian resistance. To access it, climb the Karadjordjevića street and continue straight through the park. The museum is located in a pretty modern building. The museum that is absolutely necessary to visit, where are exposed, with a sobriety that makes them even more emotional, the photos and writings of the thousands of inhabitants killed during the day of 21 October 1941.

The event was so far away from everything we had known until then that Jean-Paul Sartre will write: " Whenever I hear about Yugoslavia, I always feel close to the people of Kragujevac because I remember the heroism of a whole people. " On the morning of 21 October 1941, in response to actions in the vicinity by Tito's supporters, the Nazi generals ordered the order to evacuate the entire male population and direct it towards the hills of La Šumarice, above the city.

Many will be able to flee in time and will join the maquis, but 7 000 people will be firing in one day. Workers, craftsmen, engineers or teachers will be thrown into a common pit with a ball in the neck. But the most horrible was the order given to children of a school to dig their own graves— a trench— while their teacher had to sing; they will be slaughtered and their bodies covered with live lime. The museum is simply shocking. By entering, there are some very beautiful works by Montenegrin painter Petar Lubarda on the theme of peace. Then you can reach the first floor, where explanations about the tragedy are presented on clear and well-designed panels. The photos are explicit. By looking at it more closely, we note that all of them are workers working with their hats, intellectuals and high school students. A room displays, for memory, the photos of all the missing. As well as poignant letters of children, and communiqués by generals from Wermacht ordering that for an injured German soldier, 100 Serbs die.

Open every day from 8am to 3pm in winter, 6pm from April to October. 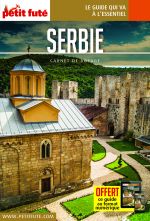