Dhërmi (pronounced "Theurmi") or Δρυμάδες/Drimades in Greek, 1,800 inhabitants, is a village in the municipality of Himara, 16 km northeast of Himara and 54 km north of Saranda. Located halfway between Vlora and Saranda at 200 m above the sea, Dhërmi is considered the "pearl of the coast". This small village with a majority Greek population was until recently famous for its olives. Nearly deserted in winter, it has become one of the busiest places on the coast in summer. Dhërmi is dominated by the highest peaks of the Çika massif (2,045 m above sea level). Like many villages on the Ionian coast, this one is divided in two: the tourist part situated on the seafront and the old village clinging to the heights. In addition to its charming beaches, Dhërmi offers several points of interest, starting with its Orthodox churches. The old village is also worth a walk. Along its winding cobbled streets, you will discover beautiful stone houses surrounded by fig trees and vines. Unfortunately, most of these houses are now in a worrying state of disrepair, as many families have emigrated. The churches are prey to looters and anti-Greek nationalists. Below the village, for swimming, is the beach of Dhërmi with many hotels and bars, then the beach of Dhrale.

Let's go. Once or twice a day, minibuses departing from Vlora serve the villages on the coast to Himara, but it is advisable to check the timetables on the spot. Similarly, minibuses make the reverse journey from Saranda to Himara.

Prepare for your trip Dhërmi 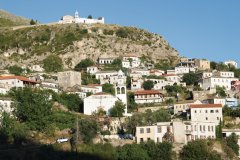