Established in 1974, it is one of our favourite museums in Albania. The space dedicated to temporary exhibitions

is one of the few places in the country where contemporary art has a place in the city. As for the permanent exhibition rooms, they are a veritable time machine, especially those devoted to official communist art.

Here we witness the birth of non-religious painting in Albania. Note especially the paintings Nikollë Çoba me kostum shkodran (Nikollë Çoba me kostum shkodran, 1897) and Portret i Ismail Pashës (Portrait of Ismail Pasha, undated): these portraits resemble photographs. And for good reason, they are signed by Pietro Marubi (1834-1903), the country's first photographer in 1853 and founder of the Marubi dynasty of portrait reporters. A naturalized Albanian Italian, he returns here to his childhood love, painting. Another nice discovery: the beautiful painting Pamje nga Ulqini (View of Ulcinj, 1897, city of Montenegro). It was created by Kolë Idromeno (1860-1939), whose very assertive style owes much to his time at the Fine Arts School in Venice, but also to his talents as a photographer. Like Marubi, he was from Shkodra. And like him, he was a pioneer in showing films in Albania for the first time.

Here are exhibited artists from Tirana's first art school founded in 1931. First of all, Sadik Kaceli (1914-2000), whose Portret fshatari (Portrait of a Peasant, 1933) can be admired here. Studying at the Beaux-Arts in Paris from 1936 to 1941, he is considered one of the best Albanian painters of his time. It was to him that the communist regime entrusted the design of the first banknotes issued in 1945, as well as the design of the arms of the People's Socialist Republic of Albania. Another great name: Odhise Paskali (1903-1985) to whom we owe the statue of Skanderbeg which is enthroned just next door in the square of the same name. Partly trained in Italy, he is one of the few artists in the country whose sculptures can be found in major Swiss and German collections.

Works of pure propaganda, the paintings exhibited here are of little aesthetic interest, except for the large painting Vojo Kushi (1969) by Sali Shijaku (born 1933) showing the Serbian-born national hero Vojo Kushi (1918-1942) attacking a tank with a grenade. His almost surrealist bias, which frankly detracts from the rest of the room, and his attitude as an "honest" artist facing the regime, make him one of the rare painters of this period to be recognized today.

Completely under the influence of socialist realism imported from the USSR, official artists no longer even tried to describe a "reality" that would please the regime, but rather to give as an example the "new man", such as the soldiers with perfect features and muscular bodies painted by Pandi Mele (1939-2015) in his triptych Ushtarët e revolucionit (The Soldiers of the Revolution, 1969). It is to this generation of artists that belongs the sculptor Kristaq Rama (1932-1998), father of Prime Minister Edi Rama and author of the statue of Mother Albania that dominates the cemetery of the Martyrs of the Nation. Some of his works are often exhibited here.

After the break with the USSR, Albanian official art had to reinvent itself. Despite a clear formalistic influence, it becomes more experimental and therefore more interesting. Having become a master of abstract art since the fall of the regime, Llambi Blido (born 1939) then ventured into minimalist and "typographic" graphic design, as with the very successful Në pultin e komandimit (In the Control Room, 1971). Marked by Chagall, Edison Gjergo (1939-1989) borders on psychedelic art with his Fondatori (Foundry Worker, 1971) that looks like Vulcan. For having strayed too far from the party line, the artist was imprisoned in 1974. Finally, our favourite work here is undoubtedly the very light and poetic Kooperativistet (The Cooperative, 1972) by Bajram Mata (1940-1983).

Modern paintings and sculptures (from 1989 to the present day) - Room six.

In the last years of the communist regime and the chaotic period that followed, Albanian artists are confronted with freedom and seem to want to make up for lost time: naturalism, expressionism, naive art, abstract art, surrealism... The result is not always very happy, but there are metamorphoses. Notably the painter Abdullah Cangonji (1920-1987), who moves here from the fantasy of the new man in the 1960s to a raw but colourful reality presented in Peshkatarët (Les Pêcheuses, 1990). As for Lumturi Blloshmi (born in 1944), he frees himself from dogmas to become completely integrated into the contemporary art movement in the Balkans, as with his Metamorfoza (2008), a skull covered with cigarette butts. Finally, out of curiosity one can take a look at the very cubist painting Pikëllimi i netëve kosovare (The Falling Nights of Kosovo, 1989) by Edi Rama, elected Prime Minister in 2012. 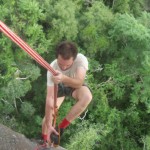 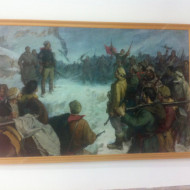 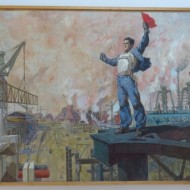 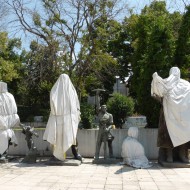 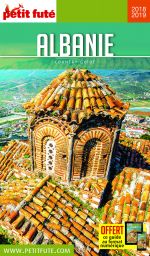