Top 10 of the most beautiful ports in France! When do we (re)leave ?

From north to south via the west, France benefits from a generous maritime coast which attracts many French and international travellers to enjoy the coastline. Whether you are a yachtsman looking for a new anchorage or simply want to admire the boats and stroll along the seafront, Petit Futé has selected for you the 10 most beautiful ports in France, from the English Channel to the Brittany coasts via the Atlantic and the Mediterranean. The ports have that special atmosphere that makes you want to linger there for hours, and they are a must for seaside holidays.

The first French fishing port in the Mediterranean is like the city of Sète: cosmopolitan, colourful, lively and picturesque. Dating back to 1666 and having made its wealth from the wine trade, one likes to walk close to the water and admire the buildings with their warm-coloured facades, the bridges and the trawlers returning from the open sea. It is also in this part of the city that life comes alive at all times, especially in summer. Cafés and large terraces, restaurants, there is everything to spend a pleasant time. A must for boaters in Occitania!

What a splendid port Honfleur is. With its colourful facades, its stalls, its art galleries and its old rigging, the port located in Normandy looks like a postcard! Here, one can almost say that nothing has changed since the 17th and 18th centuries. A must is of course to stroll along the Quai Sainte-Catherine and stop at the terrace of a café or restaurant. Without forgetting to look at the water where the façades are reflected, a natural and enchanting spectacle. A magnificent place that has inspired many painters: Monet, Turner, Courbet..

The Old Port, whose entrance is guarded by two monumental medieval towers, the Saint-Nicolas Tower and the Chain Tower, is emblematic of La Rochelle. This medieval complex was originally used to protect the city from attacks. There is also another tower called the Lantern Tower, which is located a little further than the entrance to the port. From the towers, the panorama offered over the city and the port is exceptional, and you have to open your eyes to see the islands of Oléron, Ré and Aix, as well as Fort Boyard in the distance. The port of La Rochelle is a perfect place to go out in the evening and enjoy a good meal in a restaurant. The heart of the city is just a stone's throw away.

If the beach of Erquy is among the most beautiful beaches in France, its small fishing port also deserves a place in our ranking. Very famous for scallop fishing, boats continue to go out to sea to catch shells, fish and crustaceans. It also welcomes boaters in an exceptional setting. It should also be noted that the port of Erquy attracts the enthusiasts of nautical activities, jet-skiing, diving, stand-up paddle or kayaking, there is something for everyone as soon as the sun starts to warm up the atmosphere

Not far from the heavenly beaches and creeks that fascinate with their translucent waters, the port of Cassis is one of the prettiest in Provence, with its many restaurants and cafes in the shade of mulberry trees. Its atmosphere is so special that you will want to stop there for hours and simply enjoy a refreshing drink while sitting on a charming terrace. Then take the time to contemplate the colourful facades of the houses, which contrast with the blue of the sea and the rocky spurs at the back. A piece of advice, reach the port at the end of the day when the sun sets, it is at this time that the colours are at their most beautiful.

Located at the mouth of the Nivelle River, the port of Saint-Jean-de-Luz, with its magnificent traditional Basque houses and brightly coloured wooden fishing boats, enchants visitors. The activity dates back centuries, since it was used to hunt cod as early as the 15th century, as well as whales on the banks of the Newfoundland Banks. Today, sailors leave by boat to fish for tuna, hake and anchovies. While it has retained its historical character, particularly with its beautiful typical houses built by the rich shipowners of the time, it is also today a key location for the local economy

The port museum of Douarnenez, a town with a rich maritime past, is a must in Finistère. It immerses you in the incredible richness of the marine world and deals with aspects of maritime life of yesterday and today. It can be said that this port is an original port in France, as a cultural place in its own right in the city. But also, because we can see boats there that are now in danger of disappearing. Museum afloat, museum ashore, visitors have the opportunity to learn more about the relationship of men from all over the world with the sea. There are also temporary exhibitions

The port of Paimpol, nestled in the heart of this old town with its warm atmosphere, is simply magnificent, as are the 16th century shipowners' houses that surround it. The port is also a great place to live all year round, with cafés, restaurants and shops just a few steps from the pontoons. One of the best times to go there is in August, during the Sea Song Festival. For history, it was these songs that gave strength to the sailors of the past to carry out the difficult manoeuvres by hand, today they are sung to pay homage to the seas and the sailors of the world.

The fishing village of Tudy Island (which is actually a peninsula) is very picturesque, with its low houses by the sea, its narrow streets and its pretty harbour with many cafes and restaurants. There really is a special atmosphere in this port which is different from so many others in France. This is certainly due to the very special situation of this village, which sits deep in the sea. The best time of the day to go for a walk on the port is probably in the evening, at sunset. The rays that reflect on the light-coloured facades of the houses then offer a picturesque and highly poetic setting

Nicknamed "the Venice of Provence", this lakeside town, located at the bottom of the Gulf of Saint-Tropez, has a magnificent charming port. It was imagined in the 1960s by the architect François Spoerry, originally from Alsace, who initially wanted to create a sort of ideal living space, where each person could moor his or her boat right in front of the house. He was opposed to large, rectilinear buildings and was in favour of a softer architecture. The colourful houses, with Provençal and Mediterranean influences, bring a special charm to the place. Several restaurant terraces overlook the sea and the atmosphere is very peaceful 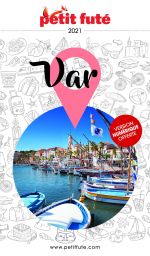 Train or plane delays, lost luggage: how to be quickly informed and compensated?

Every traveller has encountered this problem at least once in his or her life: a train or plane that is late or, worse, ...

A journey through the paroxysm of the French art of living, taking the Loire wine route is to follow the entire route, ...

PortAventura World, shows to scare you on Halloween

Autumn is coming, and PortAventura Park is pulling out all the stops and waiting for the public to enter a world that ...