The years have passed and snow has fallen in quantity since 1971 and the opening of the resort, with 2 ski lifts on the Sommand side, and 4 ski lifts on the Praz de Lys side. Today, there are 55 km of slopes and 23 ski lifts which make the happiness of winter sports in Haute-Savoie. To celebrate the 50 years of the domain, the Tourist Office launches a call for memories to all those who have put their feet, or rather their skis, on the resort and who have photos and other videos that will be highlighted on its website, its social networks and its guestbook. During nearly four months, the Praz de Lys Sommand ski area also proposes a rich program with many animations and good deals. Do not miss the Fest'Hiv just before the end of the year festivities. More information on the Praz de Lys Sommand Tourism website 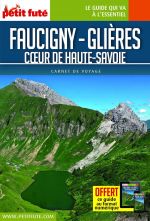 The electric tricycle: a gentle way to visit the French countryside

Nowadays, many households leave their cars in the garage once they are on vacation and opt for soft means of ...

Discover Corsica by staying in a luxury villa

Corsica is a jewel nestled between the sea and the mountains in the middle of the Mediterranean. To explore the island ...

If the exceptional sites are numerous throughoutEgypt, the coast of the Red Sea is renowned for its exceptional seabed. ...