OUR LADY OF AFRICA

Pictures: OUR LADY OF AFRICA

Petit Futé's opinion on OUR LADY OF AFRICA

Standing on a promontory 124 m above the sea and overlooking the districts of Bab El Oued and Bologhine (ex-Saint-Eugène), the Basilica of Notre-Dame d'Afrique is considered to be the counterpart of Notre-Dame-de-la-Garde in Marseille. Consecrated in 1872 by Mgr Lavigerie, founder of the White Fathers, it is the work of the architect Jean-Eugène Fromageau. The basilica, commonly called Madame l'Afrique or Lalla Myriam, is dedicated to the Virgin. Its construction is the culmination of a pilgrimage that began in 1846 on the initiative of two Lyonnais women, Marguerite Berger and Anna Cinquin, who placed a statuette of the Virgin in the trunk of an olive tree in a nearby ravine in homage to the shrine of their hometown. St. Joseph's Chapel, erected in 1856, followed this first sanctuary before being supplanted by the basilica, work on which began in 1858. The basilica is built in a neo-Byzantine style, with a dome decorated with a cross and flanked by a minaret shaped bell tower housing eleven bells. Its soberly decorated facade is crowned by a blue and white ceramic frieze. Inside, in Hispano-Moorish style, the walls are covered with ex-votos offered by believers of all faiths from Algeria, Africa and elsewhere in gratitude to the Virgin Mary. Written in French, Latin, Arabic, Tifinah, Italian, Spanish, English and Russian, the first ones date back to the origins of the basilica, others are very recent. Among them, you will notice that of Father Charles de Foucauld, that of astronaut Frank Borman who visited the sanctuary in 1970 and on which is inscribed a word of Genesis pronounced in space in 1968, and those of the sailors thanking Our Lady for not having abandoned them during the storms.

In the apse, with walls decorated with frescoes depicting the life of Saint Augustine and Saint Monique - his mother - stands the statue of Our Lady of Africa offered in 1838 by the girls of the boarding school of the Sacred Heart of Lyon to Bishop Dupuch. The colour of its bronze altered by time gives the statue the name of Black Virgin. The pedestal decorated with blue ceramics was restored by master Mohamed Boumehdi who also made the ceramics placed on the right of the heart in homage to the White Fathers of Tizi Ouzou who were assassinated in 1994. Nearby are also inscribed the names of the monks of Tibhirine who were murdered in 1996.

The astonishing inscriptions in French, Arabic and Kabyle and the prayer "Our Lady of Africa, pray for us and for Muslims" reveal the fraternal and intercultural dimension of the place. Model ships are hung in homage to the sailors who sank at sea. The organ, beautifully decorated and recently restored, was allegedly chosen by Camille Saint-Saëns. Damaged by sea winds and earthquakes, the basilica was the object of major restoration work led by the architect Xavier David, who was in charge of the renovation of Notre-Dame-de-la-Garde in Marseille. Organ concerts are regularly given there.
On the esplanade, the statue of Cardinal Lavigerie, the work of J. Vezien, erected in 1925 and restored in 2019.

The ceramics placed to the right of the choir in homage to the nineteen Catholic monks murdered in the 1990s (including the four White Fathers of Tizi Ouzou in 1994, Pierre Claverie, Bishop of Oran, and the monks of Tibhirine in 1996) were placed there following their beatification in December 2018.

Very beautiful view of the northern districts of the city; the Christian and Jewish cemeteries (where Roger Hanin is buried since 2015), the Omar Hamadi stadium (ex-Saint-Eugène) and the sea from the square in front of the basilica.

Information on OUR LADY OF AFRICA

Members' reviews on OUR LADY OF AFRICA 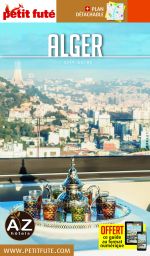