Krakow, Poland's second largest city and former capital, is a city with a rich historical and cultural heritage. Its historic centre is a UNESCO World Heritage Site, having miraculously escaped the ravages of the Second World War. From squares to cobbled streets, one should not miss its main monuments, which reveal a whole range of styles, from Gothic to Baroque. The walks in the different districts are an invitation to contemplation and to immerse oneself in the lively atmosphere that reigns in the city, which is home to many students. The beautiful Polish has definitely nothing to envy the most beautiful historical cities in Europe. Here are the must-sees of what remains the scientific and cultural capital of the country

The Royal Way, a prestigious crossing

Without visiting the monuments, the walk on the Royal Way only takes one hour. For history, this was the path followed by monarchs returning from victorious battles or by bishops on taking office. You take the street Floriańska before you get to the Grand Place. Then it's time to take Grodzka and Kanonicza streets before meeting up at the Wawel. It's simple, the main monuments of the city are concentrated around the Royal Way: the Saint-Florian Gate, the Barbican, the Cloth Hall, palaces, museums and churches. It is a must-see itinerary for anyone wishing to tour the treasures of Krakow.

Also known as the Basilica- Cathedral Basilica of St. Stanislaus and Wenceslas of Krakow, it is the most important church in Poland. The monument has been destroyed and rebuilt three times in the course of its history and the present cathedral dates from the 14th century and takes the form of a Gothic basilica. Around it is a beautiful crown of chapels with different styles. They have been added successively over the centuries. In addition to the beauty and uniqueness of its architecture, it is important to note that Wawel Cathedral is a true national shrine, as many kings, queens, poets and national heroes are buried there. It was also here that the kings of Poland were crowned for centuries.

The Jagiellonian University is the second oldest in Europe, after the one in Prague. It was founded in 1364 by King Casimir the Great. The Collegium Maius is the oldest building of the university and is a splendid example of 15th century Gothic architecture. There is a remarkable courtyard with an arcaded gallery. Today, the monument houses the Jagiellonian University Museum, where you can visit historic interiors that were once used by professors and students, such as the old refectory, the library, the teachers' rooms and the large auditorium, which houses a beautiful collection of paintings. In particular, you can visit the room of the famous astronomer Copernicus, who studied in Krakow from 1491 to 1495, and see an incredible array of astrological and astronomical instruments.

The Cloth Hall, an architectural jewel

The Cloth Hall is one of the most important monuments in Krakow and its oldest "shopping centre". It brings together architectural elements from very different periods, which is not surprising when you consider that it was built over a period from 1257 to the present day. In 1358 King Casimir the Great had a 100-metre long building with three naves built, and after a fire in 1555 Giovanni Maria Mosca built a new two-storey building in Renaissance style. Between 1875 and 1879, Tomasz Prylinski added splendid neo-Gothic arches on both sides. It is impossible to miss this imposing building on the Market Square which, although in the past it was mainly dedicated to the wholesale fabric trade, today houses numerous cafés and craft shops, as well as the 19th century painting and sculpture collections of the National Museum of Cracow on the first floor.

The Market Square or Rynek

Rynek means market in Polish. The Rynek, or Krakow Market Square, is an exceptional place as it is the largest medieval square on the European continent. It is the busiest place in the city, both for residents and visitors. We like to stroll there when the sky is blue to take advantage of the terraces and the view offered on the beautiful facades of the bourgeois houses. It is also a great place to see some of the city's most beautiful historical monuments: the Cloth Hall, Krakow's St Mary's Basilica, St Wojciech's Church and the tower of what remains of the old Town Hall.

This 80-metre diameter mound was erected in 1823 by the inhabitants of Krakow to pay homage to Tadeusz Kosciuszko, leader of the national uprising of 1794. In 1853 it was surrounded by a military citadel made of bricks and in order to reach the top of the mound, you have to reach the small chapel of the Blessed of Bronisława, with its neo-gothic architecture. It is a peaceful place to stroll and once you reach the top of the hill, at 34 meters, you can enjoy a splendid panorama of Krakow, the surrounding villages and several mountain ranges of the Southern Carpathians

This museum is one of the most popular places in Krakow. While this must-see location inspired the famous film Schindler's List, it also gives visitors a better understanding of how this Nazi industrialist saved the lives of 1,200 Jews during the Holocaust. The museum has a permanent exhibition called Krakow under the Nazi occupation between 1939 and 1945 and reveals the history of the city from the end of 1939 to the winds of freedom of the communist era. Through exhibits, sounds and images, a tour of the factory offers a journey back to the terrible time when Jews lived under Nazi occupation in Poland.

How to get to Wawel Castle

The Royal Castle of Krakow is located on the hill of the same name and overlooks the old town and the Vistula below. It once welcomed the kings and queens of Poland, so a visit is an opportunity to discover the city's past glory. This splendid complex of several buildings, churches and fortifications reveals a mixture of different styles. There are also Gothic, Renaissance, Romanesque and Rococo elements. In addition to admiring its overall architecture and taking a walk in its remarkable courtyard, it is essential to visit the royal apartments, the Oriental Art Museum and the basement exhibition that shows what the hill looked like 1,000 years ago. At the foot of the castle, by the river, you can admire the statue of the legendary Dragon of Wawel, who, careful, even spits fire.

A moment in the green at the Planty Park

The Planty Park is ring-shaped and encircles the historic centre of Krakow. It is the green lung of the city, with its 21 hectares and numerous gardens of different styles. The Planty were created at the beginning of the 19th century on the site of medieval fortifications that were falling into ruin and were a veritable breeding ground for disease. However, some fragments of the fortifications are still visible: the Barbican and the Saint-Florian gate. Today, 40 species of trees and shrubs can be admired here, as well as statues in memory of Polish artists. It is a peaceful place, no city in Poland has a similar park. It's a good place to take a walk to observe the colours of autumn or to take shelter from the sun on hot summer days

A moment of culture in MOCAK

Located in the Podgorze district, the Museum of Contemporary Art in Krakow is the work of Italian architect Claudio Nardi. It is one of the city's newest tourist attractions as it opened in 2011. In a modern, two-storey building, permanent and temporary exhibitions of paintings, sculptures, photographs and installations by contemporary artists, both Polish and foreign, are on display. It is a great place to immerse oneself in the relationship between art, individuals and society. The place also has a bookshop and a pleasant café 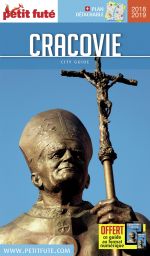 10 Christmas cribs to see in the world

The nativity scenes are one of the most powerful symbols of Christmas. Passionate craftsmen sometimes reproduce the ...

Where to go to see the most beautiful Christmas markets?

The magic of Christmas is also its markets, the good smell of gingerbread, chocolate, mulled wine or candied fruit, ...