Even today, Verona is one of the most visited Italian cities with 2.89 million visitors in 2016. Strategically located between Milan and Venice, and on the road to Central Europe via the Brenner Pass, it stretches along the banks of the Adige River at the foot of the Lessini Mountains.

History. Its origins go back to prehistory. In 89 BC, Verona was a Roman city. The barbarian leader Odoacre turned it into a military fortress in the 5th century, before being defeated by Theodoric in 489. Attached to the Germanic Empire in 952, it became a free city in 1107. It reached its political and artistic apogee in the 14th century, under the rule of the Ghibellines and Scaligeri, whose long domination, which began in 1263, lasted for 127 years. This family of condottieri (military leaders), whose peculiarity was to bear original names such as Mastino (watchdog) and Cangrande (big dog), was able to transform its courtyard into a cultural mecca, welcoming Dante Alighieri from 1301 to 1304 (the poet dedicated the last book of his Divine Comedy, "Paradise", to Cangrande I). Annexed by the Visconti of Milan in 1387, Verona was part of the Venetian Republic from 1405 to 1797, when the city was occupied by the French armies led by Napoleon. It was ceded to Austria by Bonaparte and became part of the Kingdom of Italy in 1866. Its Roman monuments from the 1st century BC are remarkable: the Arena (one of the most important temples of open-air lyric opera in Italy), the Roman theatre, an arch and two period gates. The city also has monuments from the Middle Ages: its famous Romanesque churches and Gothic buildings. Beautiful squares such as Piazza dei Signori, Piazza delle Erbe, the most picturesque, and Piazza Brà, as wide as the Liston, the promenade that runs alongside the bullring, catalyse Verona's urban sociability.

The city today. Thanks to its important commercial position, between the north and south of Italy and between the east and west of Europe, its economy is dynamic and its per capita income is among the highest in Italy. But Verona is also the romantic city par excellence, where millions of lovers go every year to admire the balcony of Juliet's house, a symbolic place whose walls are covered with declarations of love. For the freehearted, lovers of architecture and painting, the city offers interesting opportunities to visit: the Romanesque Basilica of San Zeno Maggiore with its famous bronze door, decorated with scenes from the life of Zeno, the first bishop of Verona, and its triptych of Mantegna; the Gothic church of Sant'Anastasia, the largest in the city; the Castelvecchio, an imposing crenellated building, all in brick, now the Municipal Museum.

The must-see places in Verona

Prepare for your trip Verona 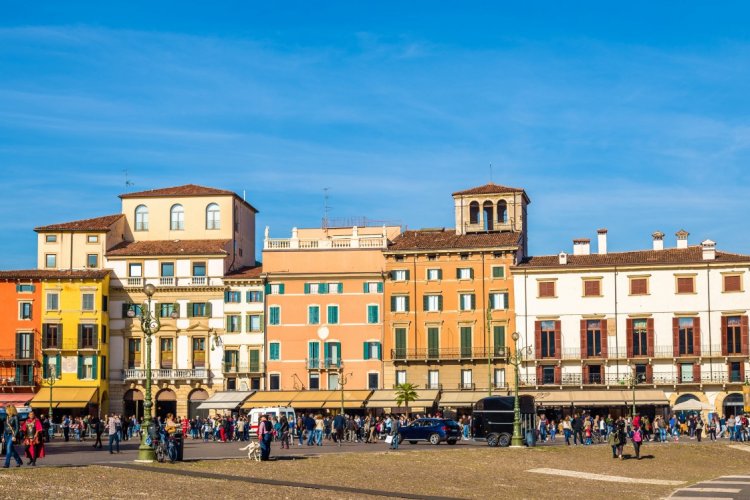 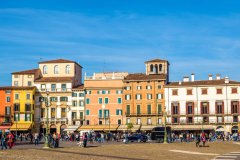 From its gastronomy to its exceptional landscapes, Italy never ceases to enchant travellers from all over the world. The charm of this country of a thousand facets certainly lies in its traditions and landscapes which vary from North to South, forming a united country, but still culturally fragmented. A tour of Italy allows you to discover all the poetry of hilly landscapes before stopping in sublime cities that are home to a rich historical ...