Karlovy Vary, also known by its German name Carlsbad, 120 km from Prague, is located in a narrow valley where the river Teplá flows and flows into the Ohře. Karlovy Vary owes its name to its founder, Emperor Charles IV (Karel IV). Legend has it that during a hunting expedition, a barking deer and the Emperor's dogs were burned by a jet of boiling water from the ground. Discovering the existence of the hot springs, Charles IV decided in 1358 to found a water city that would bear his name. Medical analyses of the waters were not carried out until much later, in 1522, but already their therapeutic virtues were known and attracted the great names of the kingdom. The resort, now the largest of the 50 spas in the Czech Republic, is proud to have welcomed the most illustrious personalities, from Russian Tsar Peter the Great to Empress Maria Theresa, but also artists, writers, musicians and poets such as Goethe, Schiller, Dvořák, Chopin, Liszt and Chateaubriand, who sought inspiration here while caring for their liver and arteries. You will sometimes find it difficult to find the brilliant atmosphere of the old Empire among the curists in a raincoat absorbing their hot water with the help of a spout cup, which you will be asked to buy (for a modest price) if you wish to test these springs with their strange taste, but you will not tire of admiring its baroque houses. Nowadays, the population of some 49,000 doubles as soon as spring arrives, and a colourful crowd takes to the streets during the film festival in early July. Be prepared to familiarize yourself with Cyrillic, because the Russians, who own most of the city's shops, come every year in tens of thousands: many menus are posted in Russian before being posted in Czech.

The must-see places in Karlovy Vary

Prepare for your trip Karlovy Vary 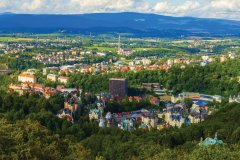