The must-haves for a Christmas in London

In London in December, temperatures drop sharply and the hot wine starts to be felt at every corner of the street… After Halloween, it's Christmas coming! The British capital then takes magical turns. Oxford street and all major arteries illuminate a thousand lights and shops offer the show of their windows windows to both the young and the big. We all let ourselves be lulled by this particular atmosphere and so enchanting to the sound of the famous Christmas songs that the choirs worship in the churches. Even if you're not fond of Christmas pudding, spend Christmas in London will put your eyes on it. Petit Futé delivers its essentials for a successful stay.

Hyde Park and its carnival

Hyde Park is the green lung of London. It is the largest park in the city centre. With a length of more than two kilometers, it is the favorite place for Londoners to recharge their batteries. But from mid-November to early January, when the British capital dons its winter coat, Hyde Park is transformed into a huge festive fair: "Winter Wonderland". It is the largest fairground in the United Kingdom, something to delight young and old alike! There are many activities: ice skating rink, circus shows, carousels, bumper cars and above all a gigantic 60-metre high Ferris wheel with a breathtaking view of London and its many Christmas lights. But the main attraction of "Winter Wonderland" is of course the Santa Grotto! Meeting the famous old man in the red coat is always a magical moment

Trafalgar Square, the largest square in London, is often considered the heart of the city. Dominated by the famous National Gallery and the impressive Nelson's Column, which commemorates the victory of Admiral Lord Nelson over the French fleet at the Battle of Trafalgar in 1805, Trafalgar Square hosts events of all kinds throughout the year. During the festive season, you can admire a gigantic Christmas tree shining brightly. Since 1947 it has been donated annually by the city of Oslo to thank Great Britain for its support during the Second World War. It comes directly from a Norwegian forest and is decorated with more than 500 white lights. The tree lighting ceremony, led by the Lord Mayor of Westminster, marks the beginning of Christmas festivities in the city. Groups and choirs perform and set the tone for London's festivities! At the beginning of January, the Forest King is removed from the square and turned into compost.

Located in Leavesden, just thirty kilometres from London, the "Warner Bros Studio Tour London" delights Harry Potter fans. It is here that for more than ten years the films of the witchcraft apprentice saga were shot, including the famous scenes located in the great Hogwarts hall. Opened to the public in 2012, the studios allow visitors to discover behind the scenes. During the Christmas season, winter takes place at Hogwarts. The place becomes even more magical. Sublime trees line the entrance and a replica of the Christmas feast is set up on tables in the refectory. It is also an opportunity to see how artificial snow is made or how fake flames appear in chimneys

The Southbank district and its festival

In Shakespeare's time, the South Bank of the Thames was a renowned debauchery scene where theatres and brothels welcomed Londoners eager for new sensations. Today, Southbank is one of London's most vibrant areas. Exhibitions and festivals constantly enliven the streets. You can also enjoy a splendid view of Big Ben and Parliament. From the beginning of November to the end of January, the Southbank Winter Festival takes over the area. The Thames River banks are home to a variety of performances for young and old alike, with theatre, concerts and choirs to warm up the atmosphere. The Christmas market is the ideal place to enjoy mulled wine and find some original gifts!

Covent Garden and its market

Covent Garden means "the convent garden". The area was previously used as a vegetable garden at Westminster Abbey. Today, Covent Garden is home to a huge covered market built in 1830. Its large glass halls give it a special charm and it is under these galleries that you can find the latest trends. During the Christmas season, Covent Garden is adorned with a thousand decorations, each more sparkling than the next. You can admire a sumptuous Christmas tree and an illuminated reindeer, life size! Covent Garden also hosts one of the city's largest Christmas markets. But the most important British event not to be missed is the "Christmas pudding race". The participants, disguised as Santa Claus and other elves, compete in a race full of pitfalls. Their objective: never drop the Christmas pudding they have in their hands! In 2019, the race will take place on December 7. It raises funds for cancer research. An entertaining and useful initiative!

Kew's botanical and royal gardens are home to more than 30,000 plant species from all over the world, many of which are extremely rare. The Victorian greenhouses are sublime, but don't miss the carnivorous plants: a breathtaking natural spectacle! If summer offers a thousand colours to the gardens, winter and the end of year celebrations make it shine. It is certainly here that you will find the most beautiful Christmas lights. In 1790, Queen Charlotte began, for the first time in Britain, to decorate Christmas tree branches in one of the largest rooms of the Kew Palace. It then became a tradition. Since 2012, the botanical gardens have been putting on a light show: lighting kew after dark. A bright path worthy of a fairy tale enchants young and old with its brilliant colours. Christmas at kew is a very popular attraction in Great Britain, it is necessary to book your ticket well in advance. It takes place from the end of November to the beginning of January.

Piccadilly Circus, the heart of the festivities

At the crossroads of the city's four main arteries, Piccadilly Circus was once considered the heart of the British Empire. Today it is the nerve centre of the city of London. Attracted night and day by visitors and Londoners alike who flock here to shop at all hours of the day, Piccadilly Circus is the small British Times Square. But in winter, it's not only the advertising signs that glitter: Piccadilly Circus is illuminated from all sides. And don't miss the main streets around it either: Piccadilly, Regent Street, Glasshouse Street, Shaftesbury Avenue, Coventry Street and Oxford Street. The decorations, including the windows of department stores such as Harrods or Fortnum&Mason, are sumptuous and enchanting.

Many ice rinks are opened in the British capital in November. Among the most famous are those in Hyde Park and the Tower of London. But the English's favourite rink is certainly the Somerset house one. This large neoclassical building in the heart of London overlooks the Strand, one of the main arteries, skilfully decorated in December. The 900 m² courtyard has been completely transformed into a temporary ice rink. All day long, young and old alike enjoy themselves in a friendly atmosphere. At nightfall, it's the turn of the clubbers to invade the track! The ice rink is transformed into a discotheque and frequently hosts internationally renowned DJs

Built in the 17th century, Saint Paul's Cathedral dominates the City. This is the fifth building built on this site: the first cathedral dates back to 604 and the Romans even built a temple there in honour of the goddess Diana. It was after the fire that ravaged London in 1666 that St Paul's Cathedral was rebuilt... And it must be said that this time the foundations were solid because it even resisted the violent bombardments of the Second World War. It is in this place steeped in history that you will be able to listen to Christmas songs on December 24. Coming to hear Christmas carols performed each year by a brilliant choir within the cathedral itself has become a real tradition in London. When the music resonates within its 300-year-old walls, the atmosphere becomes magical. The midnight mass is also celebrated there every year.

London Eye and its panoramic view

London eye (recently: The Coca-Cola London Eye, advertising obliges!) is one of London's flagship attractions. This big wheel allows to observe the whole city at more than 443 feet (135 meters!). The view is spectacular at night, and even more so at Christmas time. You can admire the city's illuminations nestled in the warmth of one of the 32 cabins of the attraction. During the holidays, an ice rink is set up at the foot of the wheel. Skating to the rhythm of the music while admiring the lights reflected on the ice is an almost magical experience. To give even more charm to your evening, it is even possible to order champagne. And if you're staying for New Year's Eve, the London Eye is the focal point of the celebrations: it's from here that the countdown begins before the fireworks are fired. 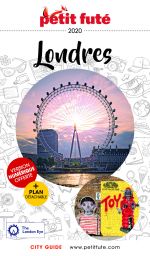 The 10 Mother's Day getaways to offer

Mother's Day is coming up dangerously close... and you still don't have a present for your mom? We thought of you this ...