If Paris is the city of love, then Venice is the city of absolute romanticism. You have to come to Veneto, on the Adriatic coast, at least once in your life, and cross the lagoon to get lost in its narrow streets, from squares to squares, from churches to palaces. You have to see Venice and sail along the canals in one of the hundreds of gondolas that criss-cross the city's six historic districts. From St. Mark's Square to the Doge's Palace, from the Rialto Bridge to the Church of the Friars Minor, "La Sérénissime" is the city-museum par excellence, rich in a stunning cultural and architectural heritage, to be discovered with its Venice tourist guide. From Marco Polo to Casanova, passing through Shakespeare, Petrarch or Hemingway, many travelling artists have succumbed to the charms of the other city of lovers. A lacustrian city whose artistic variety never disappoints, from Roman memories to Renaissance masterpieces, with its avant-garde museums such as the Guggenheim or the Pinault Foundation at Palazzo Grassi or its world-class events such as the Venice Biennale.

What to see, what to do Venice? 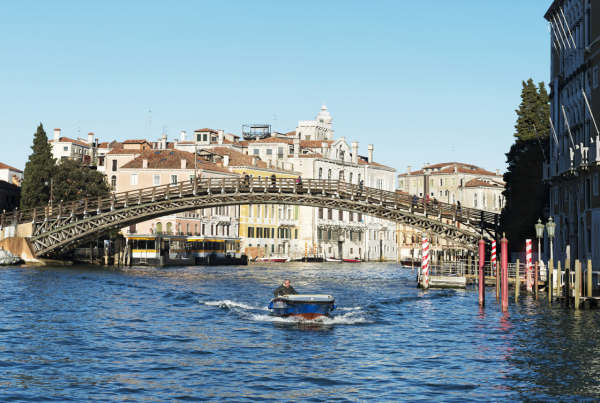 What to visit Venice ?

When to go Venice ?

The best times to go to Venice are spring and autumn, even if there are plenty of tourists. We particularly recommend September to taste the glamour of the Mostra, the film festival, and visit the Biennale, or the two weeks from mid-February to see the Carnival. Beware of the phenomenon of the acqua alta (high tide) which often floods the city at the end of October-early November. December and its fogs (and sometimes even the snow) are magical. In summer, avoid the period from July 1 to August 15, as the heat and tourists could spoil your stay.

Due to the Covid-19 pandemic, entry and travel restrictions may apply Venice. Remember to visit the site of the Ministry of Foreign Affairs before you leave for the latest information
Practical information for travel Venice
Formalities Budget Horaires Getting around Gastronomy

From the Serenissima to the Dolomites, tour in the north-east of Italy

How to go Venice

There are many direct flights to Venice at prices ranging from simple to quadruple. It should be noted that the price variation depends on the company borrowed but, above all, on the time required to book. To obtain attractive rates, it is essential to do so well in advance. Remember to buy your tickets several months before your departure!

Travel agencies offer all-inclusive weekends to taste all the wonders of Venice but also longer tours including the other most touristic cities in the northern half of Italy: Rome, Florence, Pisa, Siena... The Venice Biennale and Carnival are also the subject of all-inclusive event packages.

The easiest way is to walk around because the heart of the city is completely closed to traffic. For longer trips, there is the vaporetto (bus boat). The city has about fifteen vaporetto lines that allow you to quickly reach any site on the lagoon.

The daily life of the Venetians passes through a strong relationship with history. Stones, palaces, churches, keep the memory of the glory hours and the challenges that the lagoon city had to face over the centuries. This festive city has always liked to parade itself around and make a spectacle of itself. Each of these colourful events alone deserves a stay in the Serenissima. Among them, Carnival is certainly the most famous, with its parades, masks and crazy parties. Closer to home, the Biennale is a major event during which the Serenissima puts itself in the colours of architecture and contemporary art. To be visited, why not by travelling by gondola; it may be the most touristic thing in the world, but it is still very charming.

Down with the Venetian carnival

At the time of the Biennale

Down with the Venetian carnival

A natural phenomenon inscribed in the DNA of the lagoon, theacqua alta (high tide) floods a large part of the city. Caused by an addition of natural circumstances, almost picturesque for tourists, it is a fact that worries Venetians nowadays. Indeed, the tides, once punctual, are becoming more and more frequent

Venice isn't just a museum city. The Pinault and Guggenheim collections and numerous art galleries demonstrate the city's dynamism in the field of contemporary art. And every year, art lovers and collectors meet at the Biennale, a leading event that sets the trend worldwide.

Boats of all kinds criss-cross the Venetian canals: firemen, ambulances, taxis, rubbish bins, but also vaporetti, gondolas, reefer boats for transporting fruit and vegetables. Whether you travel by gondola, taxi or vaporetto, you'll have to adapt to the slow, deliciously slow Venetian rhythm anyway

Every year Venice invites the whole world to its mythical carnival. Through its calli and campi, parades, fireworks and animations follow one another. Palaces and public places come to life in an atmosphere which, although it is not as authentic today as it was in the 18th century, remains spontaneous and jovial.

Calli (from Latin, callis, street) were the name given to the narrow and winding passages between the houses of Venice, where usually the main access to the buildings was through the canals. A term that eventually remained in common parlance to designate the long(calle lunga) or short(calletta) streets of the city of the Doges.

These small tapas, made from slices of bread topped with fish, seafood, cheese, cold cuts, vegetables and other ingredients, are the essential appetizers that accompany any aperitif that is respected in Venice. Cicchetti can be eaten at the counter of a bacaro or at a table along a beautiful canal, with a glass of spritz or prosecco in hand.

In Veneto, the image of the winged lion is certainly the one most frequently seen. Symbol of St. Mark the Evangelist, it is found on the flag of the city as well as on a large part of the monuments. It is also represented with the openGospel, where the Latin inscription " Peace be with you, Mark, my evangelizer" is found.

A Venetian icon, the mask has been part of the everyday life of Venetians since the 17th century. Used as a disguise during the festivities, but also as a subtle means of masking one's identity outside the carnival period, this object comes in a wide variety of shapes and colours. Handmade in papier-mâché, it is impossible to leave without buying some!

Palazzo means "palace", palazzi in the plural. You will find a plethora of them in Venice and throughout the Veneto region, of all styles and ages. They once belonged to the great families who lived there, but they have been transformed into museums, boutique hotels and chic restaurants. Diminutive: palazzetto.

Venice has 416 bridges! Made of wood, stone, iron, some slippery and others twisted... And then there are the mythical bridges, like the Rialto or the Bridge of Sighs. But bridges also furnish the other cities of Veneto: the Ponte Pietra in Verona, the Ponte degli Alpini in Bassano del Grappa and many others.

Called Prosecco di Conegliano or Prosecco di Valdobbiadene, depending on the commune of origin, it is sometimes a very fruity dry wine and sometimes a sparkling wine which then belongs to the spumante family. Prosecco comes from the Veneto region and is mainly grown on the hills of the province of Treviso. Come on, let's toast without further ado! Salute!

With eight UNESCO World Heritage sites, the Veneto is one of the best represented regions in Italy. Places of excellence for their unique artistic and/or environmental heritage: Venice and its lagoon, Vicenza and its villas, the Dolomites, the Botanical Garden of Padua, to name but a few.

You do your market by boat: some merchants offer fruit and vegetables from their boats (especially at the Ponte dei Pugni, near Campo San Barnaba, or along the small canal at the end of via Garibaldi).

You walk along the Zattere docks at sunset, with an ice cream cone in your hand, watching the passing boats

You go on a picnic in Sant'Elena, one of the few green lungs of Venice, and choose a spot with a view of San Marco and the Lido.

You geton a bike and go for a ride to the hamlet of Mazzorbo , at the southern end of the Lido, while you stop for a spritz in the village square.

You ride through the town braving theacqua alta (as long as its level remains reasonable), water on your ankle and wearing a good pair of rubber boots.

Other destinations nearby Venice