Gleann Dá Loch (literally «the valley of the two lakes») is a beautiful valley located in the heart of the Wicklow Mountains, near the village of Laragh. In addition to its spectacular landscapes that attract many hikers, this valley is known to house the remains of an ancient monastic city, one of the most important in Ireland.

Glendalough Monastic Site. This Christian monastic site, one of Ireland's first, was founded in the life of the young Irish monk Saint Kevin, away from civilization. It is located in an ancient glacial valley in the middle of two lakes (the Lower Lake and Upper Lake, surrounded by beautiful oak forests). Attacked by the Vikings on four occasions between 775 and 1071 and then by the English in 1378, the monastery was left abandoned following the dissolution of monasteries by Henry VIII. Today, there are only ruins, including a round tower of 33 meters high, a few churches of the nineteenth and twelfth centuries and a cemetery with gravel stones and celtic celtic cross carved by vegetation, but the magic of the site operates. This ancient monastic land nestled in a deep valley forms one of the most picturesque frames in Ireland. A place of soothing beauty and spirituality.

Glendalough Visitor Center. A recommended visit before the entrance to the site, the visitor visitor center presents an exhibition on the monastic life of the time in Ireland and a film explaining Glendalough's history. Possibility of guided tours of the ruins of the monastic site (in French upon request).

transport
accommodation
Stays
On the spot
4.6/5 (9 notice)
Share on

Opening time and information on GLENDALOUGH 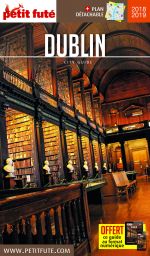