An impressive museum, exhibiting the 17th century royal ship, rescued from the depths of the sea...

This museum (the most visited in the country) exhibits the only 17th century ship that is 98% preserved. Inside, in addition to the huge ship visible from all parts of the museum, you can find skeletons of sailors who died during the sinking, films on the history of the royal ship, hundreds of objects found in the wreck, computer simulators to see if you could have prevented the ship from sinking as soon as it was launched...

Practical. The exhibitions illustrate the history of the ship and its era from many angles. The auditorium continuously broadcasts a film dedicated to the Vasa, shown in French at 10.40am, 2pm and 3.40pm. The guided tours, which last 25 minutes, are in English but it is possible to download a French audio guide on the museum's app.

From the museum's backyard, the view is of the beautiful islands of Skeppsholmen and Kastellholmen, and behind the museum are two other, more modern ships, which can also be visited. One is a lightship and the other an icebreaker.

was opened in 1990 by King Charles XVI Gustav. This unique 12,540 m² building is now one of Stockholm's major attractions. The ship, set in the bottom of an old 1879 refit basin, sits in the centre of the large hall. The entrance is at the supposed waterline, and the paved floor is reminiscent of a dock. The concrete ceiling rises high above the deck, to make room for the two original basemasts and copies of the mizzen and bowsprit. The ceiling then drapes down to almost ground level on one side of the building. The upper parts of the masts, which are missing, are evoked on the outside by the highly stylized mast that tops the copper roof of the museum. There are galleries for the public on seven levels, from the keel to the top of the stern castle. The walls are made of raw or painted concrete. In addition to the paved sections, the floors are of pine and limestone.

History of the royal ship Vasa.

A true work of art. On 16 January 1625, King Gustav II Adolphus signed a contract with the shipbuilder Henrik Hybertsson to build the Vasa. More than a thousand oak trees were felled for the construction. The following year, work began on the Vasa at Skeppsgården, on Blaiseholmen, in the heart of Stockholm, on Nybrokajen quay. Four hundred men took part and the bronze cannons were cast. When the builder died in 1627, Hein Jakobsson was given the task of continuing the work. For three years, carpenters, sawyers, tailors, glassmakers, sailmakers, painters, woodworkers and other tradesmen worked on the construction of the new navy ship, a royal ship, a name reserved in the 17th century for the largest warships. The Vasa, with its 64 large-calibre cannons and masts over 50 metres high (the only new parts added to the ship), was to be its flagship. Not only its cannons but also the profusion of sculptures make the ship particularly impressive: a roaring lion's head, angels, demons, warriors, minstrels, emperors and gods... In all, 400 sculpted figures and 300 carved wooden ornaments. The lion symbolized the Swedish king and power in his fight against the Catholics and the German emperor. Gustav II Adolphus was for his contemporaries the Lion of the North.

In 1628, the ship was moored at the foot of the royal castle and ballast, cannonballs and cannon were brought on board. On August 10, a Sunday, the Vasa began its maiden voyage. It was to be her last, for a sudden gust of wind capsized the ship and she sank off the island of Djurgården after a journey of 1,300 metres. No one was to blame for the disaster. Attempts to refloat the ship failed.

The discovery and refloating.

In the 1950s, Anders Franzén, an engineer and archaeology enthusiast, began searching for the Vasa in the waters off Stockholm, hoping to recover it in good condition. The search is no small task. For years, the waters of the harbour yielded nothing but old bicycles, rusty stoves, Christmas trees and dead cats. In 1956, Franzén's efforts, with the help of the diver Per Edvin Fälting, were finally successful: the ship was spotted in front of the islet of Beckholmen. The two men then put all their energy into rescuing her. In 1957, the French Navy and the Neptun company decided to participate in the salvage. Divers dug tunnels under the ship and well-preserved sculptures were brought to the surface. In 1959, thick ropes were passed under the ship and the Neptun company brought it back to shallower water. On April 24, 1961, the ship was finally refloated. When, after 333 years, the ship resurfaced, the sailors' trunks were still full of food, clothing and small personal items. Barrels of meat were stowed in the hold, the admiral's table was in place in his cabin. Everything is there: the beautiful pewter services of the officers, the bronze candlesticks, the lanterns...! In the following years, the divers continued to search the seabed and brought back hundreds of wood carvings. The Vasa has been installed on a concrete pontoon that will serve as a temporary museum.
4.7/5 (53 notice)
Share on 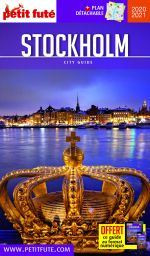