Cologne, one of Germany's most important cities, is undoubtedly THE metropolis of the Rhineland. With its one million inhabitants and its dynamism on all levels, the city is just like its cathedral, one of Germany's most famous monuments: striking. Especially when the magic of Christmas takes over the city at the end of the year. Like the rest of the country, Cologne is a prime destination for strolling through these magical markets.

Cologne Cathedral, a must-see in a thousand-year-old city

An ancient Roman city with a long tradition, bustling and festive, it is now the country's media capital, home to numerous television and radio stations, and communications companies... A monster of the tertiary sector, it is a student city of culture, young, but also of tradition, in the image of its famous perfume, Eau de Cologne. Although the war has left its scars and caused it to lose some of its tourist attractions, "Köln" is still a must-see destination, if only for its Unesco-listed cathedral, its museums and the lively streets of its old town. In short, 2,000 years of history have shaped this modern city, which is a first-class destination.

A visit to Cologne begins with the magnificent cathedral. Under construction for more than four centuries, between 1248 and 1880, this masterpiece of Gothic art has seen hundreds and hundreds of builders. All were driven by the same faith and respected the original plans. In addition to its magnificent architecture, the cathedral contains numerous works of art, such as the late 10th-century Crucifix of Gero, which adorns the Blessed Sacrament Chapel, and the Altar of the Magi (1180-1225), in the choir, which is the largest reliquary altar in Europe. You can discover it in the daylight from the square: you will be impressed by its large dark façade and its towers that seem to reach the sky. In the evening, you can admire it as if it were haloed by a green light. But whatever the case, it is without doubt the jewel of the German city. Its 157 meters are classified as a cultural heritage of humanity by UNESCO.

After this impressive discovery, we will head for the twelve large Romanesque churches of the city. Even today, they are true testimonies of Cologne's medieval golden age. This proliferation of holy places earned Cologne the title of "holy city" at the time. Although they were severely damaged during the Second World War as a result of the successive bombings that hit the city, they have been accessible again for a little over 30 years.

A city of culture

But why is Cologne known all over the world? For its famous water of course! A stay in the city will be an opportunity to visit the perfume museum. Head for the rococo building which houses it and which is also the headquarters of the famous Cologne water.

Art lovers will enjoy the Wallraf-Richartz museum, which exhibits a fine collection of Flemish and Dutch masters. Rubens, Frans Hals and Rembrandt in particular, but also some of our own impressionists such as Courbet and Monet. With the addition of Canaletto's transalpine works, the visit is fascinating. Those who prefer contemporary art should visit the Ludwig Museum. This Neubau (new building) of metal and concrete, opened in 1986, houses a museum of great importance. It would be tedious to list all the artists represented, but the names of Pablo Picasso, Otto Dix and Gerhard Richter alone are good examples. Go and see for yourself the extreme richness of the collection, which illustrates the main trends in 20th century art. The rooms dedicated to Expressionism and the Brücke movement are particularly noteworthy. The ground floor is dedicated to Pop Art (Andy Warhol fans will be delighted!). Finally, a large part is reserved for the artists of the last two decades. A must-see. Finally, food lovers will enjoy the Chocolate Museum, especially when it comes to dipping a waffle in the large chocolate fountain.

The magic of Christmas

Weihnachtsmarkt. This is what Germany is waiting for all year round: the opening of the Christmas markets that abound during Advent and are the epitome of German romance. Food, entertainment, festivities, crafts... In this ancient tradition, which is more fashionable than ever, the country reveals all its intimate and opulent, simple and lively charm. Each city has its own, and their atmosphere is different, but their objective is the same: to cultivate the magic of Christmas. Cologne is not only known for its water, its Christmas markets are also making waves! There are several throughout the city. A trip to the Christmas markets is not just about shopping. All the traditional spirit of the markets is there: the sellers make you taste the sweets and spices, test the wooden toys, admire and compare the objects... If you end up buying something you like, it will be after discovering a lot of German handicrafts, culinary know-how and quality merchandising. If you spend a day wandering around, you will hardly meet anyone. The Germans go to the markets to spend time, to taste Glühwein, to eat sausages or cakes, to listen to music, to chat loudly. Conversations take place without you even noticing them, and the fact that you are a foreigner makes you want to share the sense of Gemütlichkeit, the comfort, even more.

Every year, at the foot of Cologne's magnificent cathedral, a large selection of handicrafts and delicious Spekulatius are on offer to visitors. Don't miss the "Heinzelmännchen" market on the Neumarkt, the market in the Stadtgarten park or the Cologne harbour market. The Christmas market on Schaafenstraße, the city's first gay Christmas market, is a funny but worthwhile attraction. For the more traditional, the St. Nicholas village on Rudolfplatz and the Angel village on Neumarkt square are filled with the carefully arranged chalets of the tradition of the other side of the Rhine so dear to its inhabitants. In short, Cologne has everything you need for a magical Christmas weekend.

When to visit? Of course, Cologne can be visited all year round. To enjoy the Christmas markets, visit this year between 22 November and 23 December, every day from 10am to 9pm.

How to get there. By car, train or plane, everything is possible.

Book your accommodation at the best price - Compare 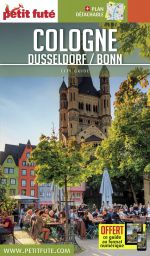 Between strudel and mulled wine, Germany is one of the countries with the strongest Christmas tradition. It is here that ...

The Metropolis of the Rhineland, in the west of the country, is a mandatory passage on a trip to Rhine. Ancient Roman ...

The Rockies, the American wilderness

The Rocky Mountains , a vast mountain range that stretches more than 4,800 kilometers from New Mexico to British ...