Where to go for the All Saints' Day holiday? Advice and destinations

While the back-to-school routine is already well in place, the All Saints' Day holiday is a good opportunity for a change of scenery. Here are a few ideas for escapades that will do you a world of good!

Where to go for the All Saints' Day holiday to find the sun?

A 2 hour flight from Paris, Croatia, the weather is still good at this time of year and by leaving out of season you can take advantage of special rates in hotels. The country makes you dream with its archipelagos just a short distance from the coast, its beaches and isolated coves. For yachtsmen, Croatia has built more than forty well-equipped marinas, spread all along the coast, the ideal place to go for a nice stroll on land or at sea. The water is sometimes a little cool in autumn, but sunshine and mild temperatures are guaranteed!

Sardinia is another good plan for All Saints' Day. Let yourself be tempted by Sardinia and its beautiful coastline! It's la dolce vita assured and for softer prices than neighbouring Corsica. Even the north coast of the island, which is very popular with tourists in the summer, has really low prices in this season and you might feel deliciously alone in the world on some of the beaches of Sardinia's north coast

To continue in beauty, don't miss a sea trip to the Golfo di Orosei to discover beautiful coves and beaches with turquoise waters.

To save even more money and be even more out of place, Thailand is a very good choice. In the land of smiles where the cost of living is up to five times cheaper than in France, you can easily enjoy the comfort of a luxury hotel in an all-inclusive formula and relax on heavenly beaches in Phuket or Koh Samui for example. Scuba diving enthusiasts will also be able to have a great time, as the sea beds of Thailand are particularly rich and varied.

Where to go for the All Saints' Day holidays to recharge your batteries in the heart of nature?

Autumn is a good time to visit the Bavarian region of Germany and take a walk in the Bavarian forest, which is brightly coloured in this season. It offers a wide choice of walks with beautiful panoramas, some of which are spectacular thanks to viewpoints set up in the treetops. And to relax your little muscles after the walk, we recommend a swim in the world's largest thermal pool in Erding.

But lovers of warmer temperatures will undoubtedly prefer the beauty of the dunes of the Tunisian desert, especially since the Sahara of Tunisia is not just sand as far as the eye can see... The geography there is varied with magnificent oases such as Tozeur, but also salt lakes and often lunar landscapes. And nothing like the silence of the desert to de-stress and cut with the routine!

Much further afield, in Central America, Costa Rica is also the country dreamed of for a stay immersed in a preserved and sublime nature. The country of pura vida concentrates 5% of the planet's biodiversity and a third of the territory is protected as a nature reserve, to the great benefit of the local fauna and flora. Walking around the country, you can easily observe rare animal species in lush jungles but also admire other wonders of nature such as active or dormant volcanoes.

Where to go for the All Saints' Day holiday to go on a city trip?

Marrakech is the ideal city for a trip to a different place at low prices. Between its picturesque square of Jemaa el Afna, its fragrant souks and its festive nights, it has something to seduce. But it has just added a new string to its bow: the brand new Yves Saint Laurent Museum! After Paris, another museum dedicated to the great couturier has just been inaugurated in Marrakech. Close to the beautiful Majorelle's garden, a 4000 m² building now houses this new museum; the most beautiful part is undoubtedly the 400 m² exhibition space which presents the work of Yves Saint Laurent.

Further east in Europe, Riga, the capital of Latvia is also a city where you will make beautiful discoveries without ruining yourself. Between its old historic centre with its cobbled streets, its beautiful Art Nouveau quarter, its huge covered market where you can taste good local specialities, its numerous museums including the Riga Motor Museum which presents an exceptional collection of vintage cars, and its many gastronomic restaurants at low prices, you won't get bored for a second.

On the other side of the Atlantic, Chicago is the ideal city for a cultural trip and at this time of the year, the climate is still pleasant.

The city possesses, among other things, a large number of architectural treasures, witnessing the glory days of the Windy city . The first skyscraper in the world was built here in 1885, and a hundred others followed, including the second highest skyscraper in the United States, the Willis Tower, which is 422 meters high

The majority of these wonders are located in the city center nicknamed the Loop, from the name of the famous aerial subway line that crosses it and which allows to circulate in the middle of the buildings, while remaining well seated. Breathtaking view guaranteed!

In Germany, October 31 will be a public holiday to celebrate 500 years of Protestant reform throughout the country.

Thuringia, where Martin Luther lived, will host numerous exhibitions on the Reformation, such as at Wartburg Castle . In Wittenberg, Luther's hometown par excellence, a festival will be held on the subject and will offer many events and concerts.

On the other side of the globe, in Mexico, on November 1st and 2nd, the Dias de los muertos (Days of the Dead) will be celebrated as has been a longstanding tradition. But nothing to do with our All Saints' Day... Over there, it's a colourful event. Markets all over the country are filled with papier-mâché skeletons, cempasuchil flowers, sweets, copal..

After installing an altar in their homes and placing offerings on the graves of their dead, Mexicans watch over the cemeteries, eating, drinking, laughing and crying in memory of those who have left. And you will be able to attend this traditional festival in every cemetery in Mexico! 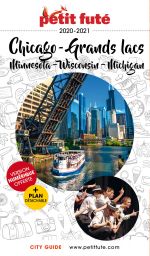 The third largest city in the United States, Chicago is a pleasant city to visit, thanks in part to its location on the ...

Amazing Chicago, with its architecture, diversity, history and legends. For some, it is the memory of the sulphurous ...

The third largest city in the United States, Chicago alone forms the Midwest Economic and Cultural Center in the State ...