Located at the tip of the Gaspé Peninsula, Bonaventure Island and Percé Rock National Park (5.8 km²) is distinguished by its rich natural and historical heritage. The landscape is sculpted by the sea. The Appalachian Mountains extend into the waters of the Gulf, revealing Bonaventure Island on one side with its rural fragrances and the gigantic wall that is Percé Rock. It is a true kaleidoscope of colours, landscapes and smells. The park includes the Charles-Robin historic sector, Bonaventure Island, Percé Rock and a marine band around them.

Bonaventure Island and Percé Rock National Park is home to a migratory bird sanctuary created to protect a very important site for seabird nesting. It is home to nearly 185,000 migratory birds, including razorbills, black-legged kittiwakes, murres, puffins and the most accessible gannet colony in the world. Percé Rock is 471 metres long and 85 metres high. It is made of limestone formed on the ocean floor millions of years ago. It was once attached to the continent. The rock once had a2nd arch, but it collapsed in 1845, leaving the obelisk that we see today.

The park is divided into four sectors:

Charles-Robin Historical Sector (Rue du Quai in Percé): before venturing onto Bonaventure Island, take the time to visit the Le Chafaud building in which the park's discovery centre and its exhibition on the park's fauna, flora and history are located. Exhibition room and documentary on gannets.

Bonaventure Island sector: Bonaventure Island is home to the largest gannet colony in North America and the most accessible in the world. Visit the built heritage of Bonaventure Island and discover the history of the fishery and the islanders. The Resto des Margaulx welcomes you at the entrance to the island, just across from the wharf. Its fisherman's soup is recognized as one of the best in the region. You can also try a lobster and crab "torpedo", which will give you energy for a short walk! There is also the Relais des Fous which offers a terrace and a dining area directly located at the gannet colony

Rocher-Percé sector: this stone cathedral is subject to severe erosion which makes its cliffs very unstable. The rock loses more than 300 tons of rock each year. For safety reasons, walking on Percé Rock is not recommended and is extremely dangerous. However, a cruise takes you to both sides of the rock.

For a boat tour of the island and Percé Rock, visit the ferry boat ticket booths in the centre of the village. Park fees allow you to walk around Bonaventure Island, visit historic buildings and tour the Discovery Centre. They are dedicated to the history, geology and nature of Percé Rock and Bonaventure Island. Every day in July and August, discovery evenings are held at La Saline in Percé, allowing visitors to learn more about the park's themes.

Open from late May to mid-October. Adults: $9 CDN, free for children 17 and under. Ferry fees extra. 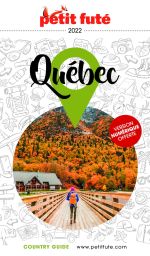