Long before reaching the city, you will have seen the golden ramparts, reinforced with 99 bastions and dominated by the facade of the royal palace. The citadel of Jaisalmer emerges from the desert, like a mirage, seeming to float on a cloud of sand. Built in 1156, the fortress has been restored many times over the centuries as the Bhatti, Moguls from Delhi and Rathores from Jodhpur fought each other. It is one of the oldest forts in Rajasthan and was listed as a UNESCO World Heritage Site in 2013.

The city was founded by a raja of the Bhatti clan called Rao Jaisal. It quickly became an important caravan route between India and Persia. In the 14th century, the Bhatti seized a caravan from Delhi. In retaliation, the Sultan of Delhi Al ud-Din Khalji almost razed the city to the ground. The fort was rebuilt nearly a century later. In 1541, he was attacked by Emperor Humayun without succumbing. But the desire for Mughal domination eventually led to the surrender of the rawal, which offered one of his daughters in marriage to the emperor Akbar. The city remained under Mughal control until 1762 and was taken over by Maharawal Mulraj. He also signed a treaty with the British East India Company in 1812 to protect it. The rise of maritime trade and the port of Bombay during the Raj period caused the city's economic decline. The partition with Pakistan in 1947 and the closure of the border completed it definitively. In 1949, the princely city joined the Union of India. In 1993, the Jaisalmer region experienced a violent monsoon that destroyed or severely damaged nearly 250 historic buildings, including the Rani-ka-Mahal, the Queen's palace. From now on, Jaisalmer is experiencing a revival of activity with the development of mass tourism.

Today, the fort still houses a population of about 3,000 people out of Jaisalmer's 65,400 inhabitants. It is a small city with its temples, finely carved facades, narrow streets, shops and palace. The fort was built on a natural sedimentary platform that dominates the plain at an altitude of 79 metres. It is 460 metres long and 230 metres wide. It has retained all its medieval charm and it is very pleasant to stroll through its alleys and ramparts, which are closed to traffic. Only a few motorcycles, cows and many tourists come to disturb the calm of this legendary city.

You will cross the double line of walls by a steep ramp guarded by four successive gates. Here you are in the square of Dashera Chowk where the famous jauhar (ritual collective suicide: rajput women sacrificed themselves following a military defeat so as not to be dishonoured) took place during enemy sieges. On the right, the facade of the palace has pretty jharokha (finely carved overhanging windows). Paved alleys follow the walls, which are sometimes 10 metres thick.

Plan a good half-day to explore the whole thing.

Members' reviews on FORTIFIED WITH JAISALMER 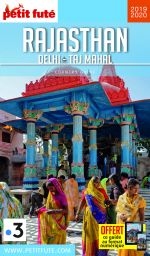