It is undoubtedly the most beautiful monument in Delhi. A prototype of the Mughal garden tombs, this immense mausoleum in red sandstone and white marble inspired the Taj Mahal. It prefigures the Mughal architecture dear to Shah Jahan, made of inlaid stone. The site includes several tombs as well as sumptuous gardens with water features. The best time to come is early in the morning or at the end of the day when the soft light is filtered by the jalis, these openwork stone screens. Humayun's tomb has been on the UNESCO World Heritage List since 1993.

Tomb of Isa Khan. Near the entrance of the mausoleum (south-east) stands the tomb of Isa Khan, general of the famous Sher Shah who dethroned Humayun for five years. It is based on the octagonal architecture of the Lodi tombs and is twenty years earlier than the tomb of the emperor. On the same side of the park, you will see the ruins of the Arab-ki-Sarai, a caravanserai in which the workmen employed in the construction of the emperor's mausoleum were apparently housed.

Humayun's tomb. This enormous red sandstone cube placed on a platform was built in 1565 at the request of his widow. She hired a Persian architect to build the mausoleum. Typical architectural elements include the double-domed dome, a technique used in Persia since the 13th century, and the pishtak, a projecting arch-shaped portal. The roofs on either side of the dome are surmounted by chhatris, stone bell towers resting on fine pillars. The mausoleum is placed at the end of a charbagh, a garden with four flower beds, with canals running through the centre of the garden and feeding basins and fountains. Under the white marble dome surrounded by kiosks, you enter the central octagonal chamber where the emperor's cenotaph is located. The tomb itself is in fact in a crypt that is closed to the public. The finely worked stucco dome still retains traces of the original painting. In the adjoining rooms, which open directly onto the esplanade, you will see the tombs of the members of the dynasty. These rooms are closed by fine jalis through which the light is filtered. 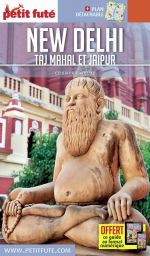