This excursion, of about sixty kilometers, passes through one of the best preserved valleys of Morocco, populated by Berber tribes. The road, winding, is very good up to Setti Fatma. This picturesque walk can be combined with an excursion to the Oukaïmeden, Morocco's most important ski resort.

Leave Marrakech by Bab Ighli, south of the ramparts.

Aghmat, km 29. Arrival in Aghmat, a small popular town on the outskirts of the old city. It was once a powerful independent city before being conquered and devastated in 1060 by the Almoravids who settled in Marrakech. Little by little, the population emigrated to the Red City, to return to Aghmat in the time of the Almohads. The Marinid sultans made Aghmat an important Koranic centre by endowing the city with a medersa and restoring the ramparts, which have now disappeared. Aghmat then became a major commercial centre on the road to the South: fabrics, perfumes, drugs and precious stones were transiting through there. The city was the starting point for many trading expeditions to Sudan and Niger, expeditions that brought back black slaves, gold powder and spices from their distant journeys. The inhabitants of Aghmat often allege that Marrakech leather was actually made in their city until the sultans imposed on the leather craftsmen to work for them inside the walls of Marrakech. Like many small towns, Aghmat claims the anteriority of this production which made the glory of Marrakech.

The remains of a mosque and a palace, but above all, of a hammam reputed to be one of the largest and oldest in all of Western Islam, bear witness to the past splendour of the medieval city. Since 2005, regular work, following the research and excavations carried out, has made it possible to consolidate the building. You will be able to visit it accompanied by the guard (telephone number at the entrance of the archaeological site) who speaks... only Arabic. This makes it relevant to consult, upstream, the Aghmat Foundation's website where you will find details of the campaigns and their results (www.aghmatarchaeology.org). But these "holiday duties" are worth the detour. The remains are very telling: the entrance opens onto the living room and the reception room with its fountain; a vault, adjacent to the original door, leads to the three hammam rooms, cold (with a basin) and warm. They basked, washed, and combed their hair until the 14th century. Two centuries later, another use: the building became a craftsmen's square, where leather and pottery were worked. Opposite, the mosque was uncovered in 2011, as was the palace adjoining the typical plan of the Andalusian palace. More than 7,000 objects and artifacts have been inventoried to date. And it's not there yet!

In the present village, you can also visit (at a glance in fact) the mausoleum of Al-Muûtamid, prince of Seville and poet, buried in Aghmat with his wife and young son. Admission is free (from 9am to 5pm) including for non-Muslims. Only the dome still shows the roughness of time, as the rest of the building has already been rehabilitated several times.

Mile marker 40. On your left, superb viewpoint overlooking the valley. Admire the luxuriant vegetation which invades the landscape and which only lets the tip of the minaret of a mosque in the ksar of Arlige stand out from the green. It is generally from here that you will meet on the side of the road an impressive quantity of hitchhikers: most of the time, it is about young people of the countryside carrying baskets of fruits, the pockets filled with painted stones or daggers encrusted with stones, which they will try to sell you, very nicely besides. If you're really interested, be aware that prices can drop considerably (divide by three or four, not forgetting that you're in the car and they're on foot: as soon as you pretend to start up again, prices will drop!).

The road continues through the Berber country. Little by little, it is gaining altitude, leaving behind many adobe villages clinging to the hill. On the asphalt road, you will see more and more mineral dealers - more or less authentic - of pottery and fossils. From here, the road narrows and winds its way up above the Ourika wadi, whose brown rocks can be seen below, contrasting with the green of the surroundings and the red of the sandstone and laterite cliffs.

Km 52. The road is now at the Ourika wadi. On both sides there are beautiful orchards and many tomato and potato crops. A little further on, on your left, a small house offers Berber souvenirs, just as authentic as those of the young people who sell them on the street, but more expensive. Just next to the shop, the Berber mill can be visited for a few dirhams. To see how the wadi water makes the mill wheel turn... The road then crosses the small village of Ighref, in the bed of the wadi. Pleasant village, organized around the main road and the innumerable gargoyles that border it. We can't recommend one over the other: the prices are the same and the drinks are similar for a pleasant service everywhere. Settle down where you can, as the area is busy, and take a refreshment before going to soak your feet in the nearby wadi.

Mile marker 60. The road gets higher and higher, and the wadi bed becomes more and more divergent. Numerous wooden bridges allow the villagers of the surrounding area not to be cut off from the rest of the world and to return to Ighref. Bifurcation towards the Gebel Yagour, one of the main mountains of the region, culminating at 2,728m. Before you set off on the mule track that will lead you to the Gebel, take a local guide who will show you the route and the prehistoric site of the Yagour (two to three days' walk). It is possible to stop at the mud village of Anameur, a marvel that seems to have come straight out of feudal times. In the spring, the grasses of the Yagour plateau arrive at hip height and make progress difficult. It is also at this time that you will be able to approach, still on the plateau, the wild horses. You arrive at the locality of Ulmes. The locality owes its name to a small source of sparkling water that gushes out of it. But this is not where the sparkling water from Oulmès that is marketed is bottled.

Setti Fatma, km 65. This place marks the end of the asphalt road and the end of this excursion, at an altitude of nearly 1,500 m. The village is nothing exceptional, except on Thursdays (souk day) and during the traditional moussem, but its inhabitants are particularly friendly towards tourists. If you can, avoid coming to Setti Fatma on weekends. The place being very popular with Marrakchis who come to spend the day, traffic jams are legion and the restaurants, armored. Park at the end of the road, on a kind of place set up for buses. At this place, the guides are waiting for you. To be accompanied and explore the waterfalls, count 50 DH maximum, otherwise continue alone on foot along a small path that leads to the edges of the wadi, a few hundred meters below. After passing the Mohammed zaouïa, the same path leads you to the seven Ourika waterfalls, the highlight of this visit (45 minutes). Sumptuous view over the valley lined with walnut, chestnut and cherry trees, and to the north over the Angour massif (3,268 m).

To see / do Vallée De L’Ourika 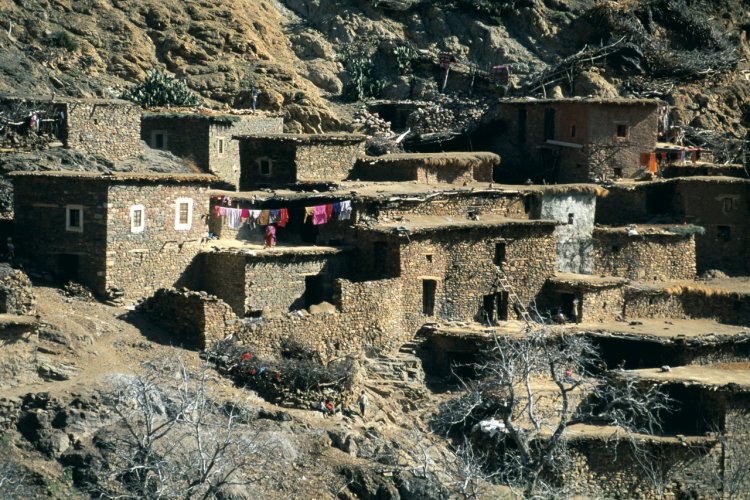 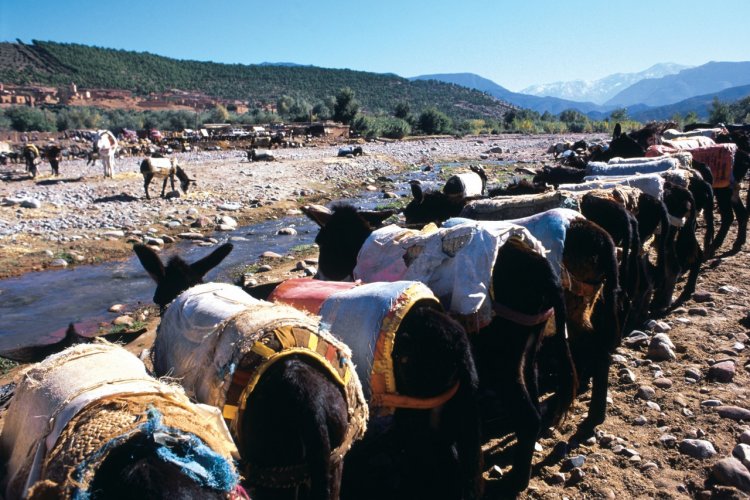 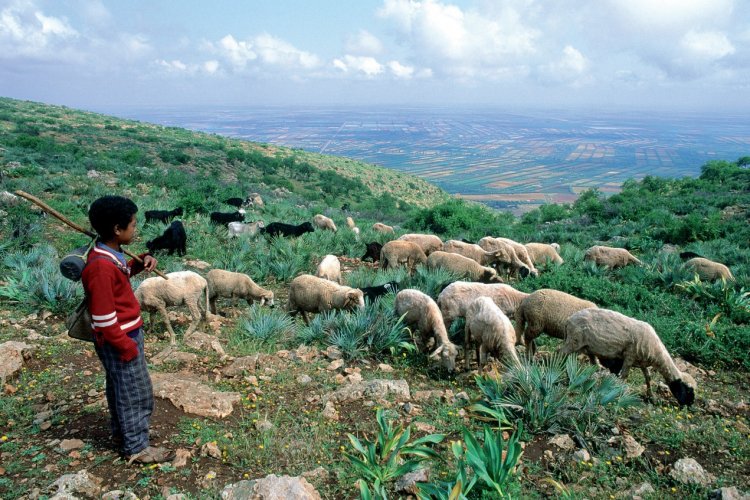 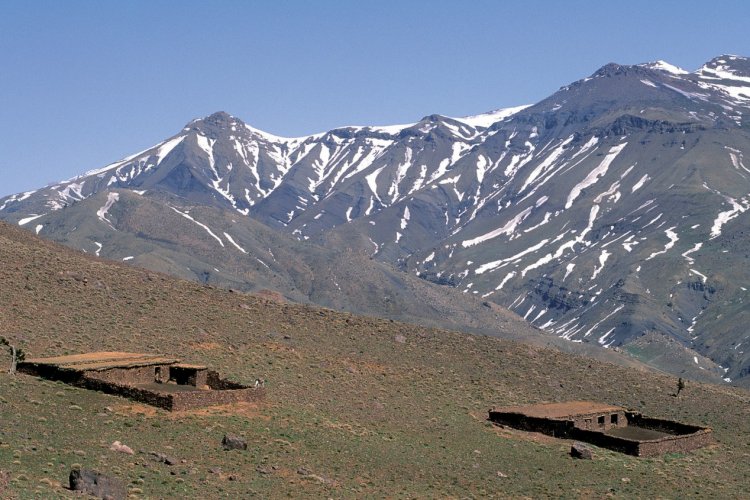 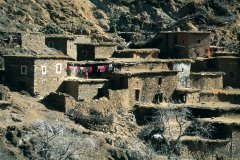 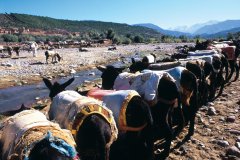 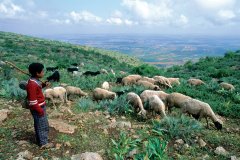 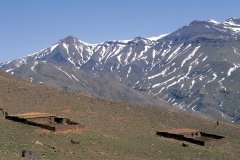