Amsterdam, capital and tourist jewel of the Netherlands... It is impossible not to succumb to the charm of this capital city set on the waves, a tangle of large canals with changing waters, like so many veins flowing towards its heart. In the Venice of the North, the weather changes as quickly as the colours of the Amstel, the clear sky follows the fog, the storm arrives without a word. A capricious and contrasting city, both modern and classic, wise and wild, conservative and innovative, it will captivate any visitor who takes the trouble to really discover it, beyond the clichés and clichés. Amsterdam currently seems to be at a crossroads, its historic centre has never been so beautiful with the Rijksmuseum as a symbol of its revival. The city seems to enjoy a prosperity in contrast with the sometimes more difficult daily life of its inhabitants. If some fear that "their" Amsterdam is becoming a museum city, the A'dam Toren, the city's newest attraction, seems to be another symbol of the city's boundless ambition. The Anne Frank House and the Van Gogh Museum are other must-sees in the city. There is also an increase in the number of peripheral districts, the Jordan and the west, the north (with the NDSM district in particular) and the east will probably be the subject of a separate district section in the near future with the new district IJburg, a real city of the future.

What to see, what to do Amsterdam? 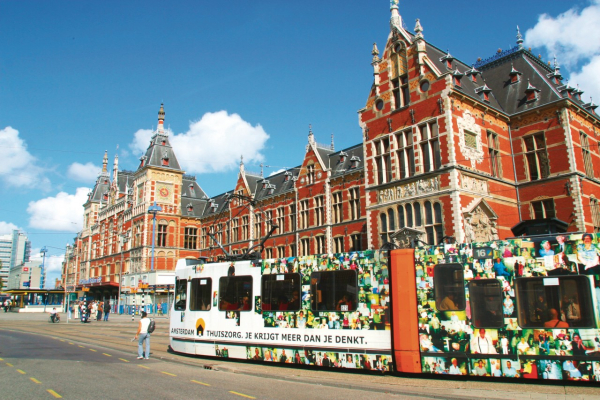 What to visit Amsterdam ?

When to go Amsterdam ?

Early spring (April and May) is undoubtedly the best time to visit Amsterdam: if the air can be fresh then it is usually the driest time of the year and Holland is adorned with flowers in a thousand colours. The high season is in summer, but Amsterdam is a city that can be visited all year round. So plan to book your hotel nights before you leave! On the other hand, you will then be very numerous to visit the city and the queues of museums and attractions will sometimes seem endless.

Due to the Covid-19 pandemic, entry and travel restrictions may apply Amsterdam. Remember to visit the site of the Ministry of Foreign Affairs before you leave for the latest information
Practical information for travel Amsterdam
Formalities Budget Horaires Getting around Gastronomy

Amsterdam in one weekend

Three weeks in the Netherlands, from south to north

Amsterdam for a weekend

How to go Amsterdam

It is very easy to travel alone in Amsterdam. Public transport and hotel facilities are abundant, you can make your choice. To avoid wasting too much time queuing in front of each monument, remember to buy your tickets in advance on the Internet or on site the day before. Queue-cutting tickets also save time for a few extra euros.

Many tour operators offer holiday packages. The most frequent ones are escapades (3 days and 2 nights or 4 days and 3 nights) and long weekends. Prices vary according to the means of transport chosen and the time of booking; last minute offers remain the most attractive. In Amsterdam, since it is a suitable place to do so, there are quite a few cultural trips, but the prices are higher.

Amsterdam, canal walk and "Remember me" exhibition at the Rijksmuseum

A Dutch proverb says "God created the earth, but left it to the Dutch to create the Netherlands". These well-chosen words underline the extraordinary side of this nation that likes to emphasize that it made itself. When you take an interest in this country and its capital, you can literally be taken aback by the power and the historical, cultural, commercial and global wealth of this country, which on paper was not very spoiled by nature... Amsterdam is a city that has, in a somewhat exaggerated way, an ecological reputation, certainly due to its intensive use of bicycles. The city majestically celebrates its two most famous artists Van Gogh and Rembrandt. Even if we know the inexhaustible photogeny of the Dutch city, Amsterdam will surprise you at the bend of a paved street, by moonlight on a canal, in the heart of an exhibition-event

The capital of the small queen

Rembrandt, master of the Golden Age

A German girl who came to live in Amsterdam in 1933 to escape Nazi persecution, she became a symbol of anti-Semitic horror after the publication of her diary. The whole family was deported and Anne died of typhus in the Bergen-Belsen camp. The house where she hid with her family is the most visited museum in Amsterdam

Amsterdam have fully identified with the legendary club where Johan Cruijff, who died in 2016, shone. Four times Champions League winner, once UEFA Cup winner, once C2 winner, Ajax is a brilliant club. Their 2019 season is still in everyone's mind! You can even visit the club's stadium, the Johan Cruijff Arena.

This word causes a lot of misunderstanding between locals and tourists. A symbol of coolness for many (foggy?) visitors, or of the Netherlands' pragmatic approach to soft drugs for others, sometimes the embodiment of the "narco-state" as a certain recently deceased French president put it. To be consumed in moderation

Flowers are inseparable from the Netherlands; in Amsterdam they are very much present, especially during the chromatic symphony of spring. The capital has gardens and parks that lavishly display flowers and plants. Don't miss Hortus, the botanical garden with over 6,000 species of plants. The flower market is very optional.

Homosexuality was legally recognised here from the beginning of the 19th century. The first same-sex marriage was celebrated in Amsterdam on1 April 2001. In recent years, the city's gay scene has been dwindling and dating apps have been taking their toll on cafes and bars. Don't miss the Gay Pride in the heart of summer

Pronounce "rezélir". Without an exact equivalent in French, gezellig refers to the warmth of a successful evening, a place, even an idea. A nice party that moves is also called gezellig. It's a fundamental word in Dutch, especially in Amsterdam, and if you hear it, it's a good sign that your stay will be a good one!

Founded in 1873 in Amsterdam, it is a symbol of success linked to the capital where the original brewery is located. Now an interactive museum, the Heineken Experience welcomes hordes of tourists from around the world every year. A brand that integrated marketing strategies early on, you'll see it everywhere during your stay.

It is a city within a city in a green enclosure accessible by a vault. They were once built by the rich for the elderly and the poor. There are 47 hofjes scattered throughout Amsterdam, the beguinage on the Spui is the best known. These hofjes are oases of peace. Our favourite is the Karthuizerhof in the Jordaan

Amsterdam has some magnificent museums that are full of treasures. Among the unmissable: Van Gogh museum, Rijksmuseum and Stedelijk without forgetting the house of Anne Frank. The museums are well laid out, pleasant and all have temporary exhibitions that are not to be missed. Many include fine restaurants and well-stocked shops

This is another place of confusion between the inhabitants and the many tourists. This historic and picturesque neighborhood is now a sex and drug Disneyland that was cleaned up 10 years ago. Now many voices are being raised to close the incongruous storefronts in the #metoo era and plans to relocate are taking shape

It's Amsterdam's Central Park! A large green area where you can do sports, walk your dog, your children, picnic, play football, climb (for the little ones) and also in summer attend various concerts and shows and take tango or rollerblading lessons. A classic for tourists and locals alike.

Amsterdam is a land of welcome and to this day 180 different nationalities coexist peacefully, making it a truly cosmopolitan city. The breakthrough of the Greens in the 2018 municipal elections and the appointment of the new mayor Femke Halsema are strong signals of appeasement. Here you will see different cultures coexisting.

You can ride your bike in any weather and are equipped with rain gear.

You know how to ride a bike with one child on the handlebars, another behind and groceries in bags.

You know that a short, efficient (and non-alcoholic) lunch guarantees a productive afternoon and an early start to an evening that is all the more festive.

You like to try out the latest trendy places, love to dance the night away but often end up in a historic brown café

You have respect and trust for the political class, the royal family, the institutions.

You are often dressed in cool clothes even on special occasions, the main thing is to feel good

As soon as it gets a bit freezing, you have only one word on your lips: "elfstedentocht", a historic skating race.

Other destinations nearby Amsterdam