It has been restored, and the buildings at the back have been rebuilt using traditional methods. Dedicated to Confucius, this temple was built in 1070 according to the plans of the literary pagoda of Kien Fou, the village of origin of the old sage. In 1075, under the impetus of Ly Nhan Tông, it welcomed the College of the Nation's Children, Quôc Tu Giam, instructing the future elite of the kingdom. It was renovated by the Nguyenen at the beginning of the 19th century. The French renamed it the Temple of the Ravens, these birds having made their home there.

The enclosure (350 m by 70 m) is divided into five courtyards. The doors and central aisles were reserved for the king, the lateral ones for the mandarins. The temple is entered through a main door, supported by two square columns that also delimit two so-called side doors on each side. From a Confucian perspective, the use of side doors was a symbol of humility and patience, qualities essential to any candidate. The first garden opens onto a central alleyway that passes between two rectangular ponds. We then pass through the gate of the Great Middle, Dai Trung, to access the second garden, similar to the first. Two ponds are separated by a central alley leading to the Pleiade pavilion, Khuê Van Cac. Its imposing portal is supported this time by four marble columns decorated with dragons. It is a real small pagoda on stilts decorated with suns and geometric shapes that remind us of geomancy, a discipline that was also part of literary examinations. On one of the floors of this small pagoda, the candidates' works were read aloud at the end of the exams. The place was also used for poets' meetings. It was restored in 1802.

The third courtyard is the heart of the temple: on each side of a square basin, the well of the Celestial Light, Thien Quang Tinh, is aligned two rows of 41 stelae each (originally 117). They are dedicated to laureates who received their doctorates between 1498 and 1787. During these four centuries, nearly 1,000 candidates were received. In addition to the competitions for doctorates of letters, this temple was the scene of 124 extraordinary competitions aimed at obtaining titles of nobility or administrative positions. The stelae are supported by a turtle, a symbol of patience, humility and longevity. Among the prizewinners whose stelae are located in the Palace of Literature, some have well-known names: The Vinh, a 15th century mathematician, who won at the age of 23; Nguyên Duy Tai, received in 1598, before becoming a great Vietnamese diplomat; or Bat Tu, who, in the 17th century, introduced the first social reforms in the country. Passing through the last gate, we arrive in the temple enclosure. Built on 40 pillars, it houses the Confucius tablet, framed by cranes and turtles, symbols of longevity. In the fifth courtyard is the college.

On May 19, 2003, the President of the State, Trân Duc Luong, inaugurated four bronze statues of kings Ly Thanh Tông (11th century), Ly Nhân Tông (11th-12th century), Le Thanh Tông (15th century) and Mandarin Chu Van An (1292-1370), who had contributed to the foundation in 1070 and subsequent development of the country's first college (Quôc Tu Giam). The statues were cast by craftsmen from the traditional bronze working village of Ngu Xa (Hanoi).

Opening time and information on TEMPLE OF LITERATURE (VAN MIEU) 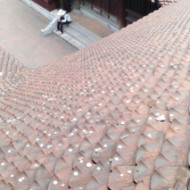 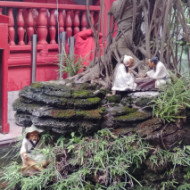 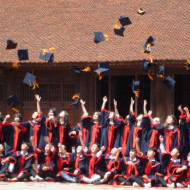 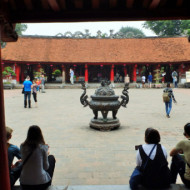 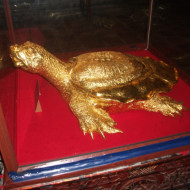 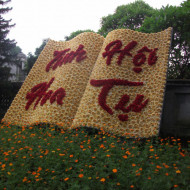 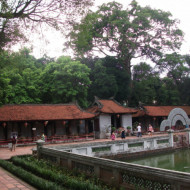 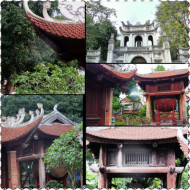