In the centre of the square is the magnificent Shanghai Museum: The exterior design is not necessarily a success (it looks like a bunker, even though the Shanghaiens nicknamed it "the basket"), but the collections, superbly presented, deserve to be spent a few hours.

The first Shanghai Museum was established in 1952 in the galleries of the old international concession field, today the building with a tower tower located behind the opera. The collections were then installed in the Art Deco building, which can still be seen at the corner of Henan Lu and Yan'an Donglu, before being moved to this new museum, specially built for the occasion and opened in 1995.

The current building in a ballot box consists of eleven galleries, partly funded by donations from overseas Chinese. On the ground floor is the sculpture room, a beautiful collection of 127 pieces, most of them being Buddhist sculptures of the Han Dynasty at Tang. The same floor also houses the bronzes gallery, 440 of the most beautiful pieces in the world: wine cuts, weapons, musical instruments of the periods Shang and Zhou (1480-221 BC), as well as the Spring and Autumns (772-481 BC). You can then visit the first floor of the collection of ceramics, which includes nearly 500 pieces, including the celadon of the Song dynasty and terracotta figurines covered with a layer of Polychrome polychrome ceramics. The entire panoply of the famous blue porcelain in Jindezhen ovens, under the Ming and Qing dynasties, is also in good stead. The museum also includes a room dedicated to Jade (third floor), but also to seals, calligraphy, painting (on the second floor), coins, Ming and Qing furniture (a very beautiful room), crafts of ethnic minorities (third floor).

Three rooms are also dedicated to temporary exhibitions, which are generally of very high quality.

The museum shop on the ground floor offers beautiful catalogues, postcards, but also reproductions of the quality of works. A large tea house opened its doors on the first floor of the museum, in a traditional, soft atmosphere.

The Shanghai Museum is undoubtedly the most beautiful of China, both by the quality of its collections and by its presentation. We are here far from the neon lights of the museums of the capital! Those who are not particularly fascinated by Chinese art will be seduced by these extraordinary collections. As for enthusiasts, they will have to spend long hours exploring this magnificent museum.

Open every day from 9am to 5pm (last entrance at 4pm). Free admission. Excel audio guide (in English and Chinese) for 40 extra RMB. Pretty shop. Thé shop on the 1st floor. 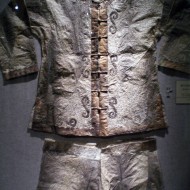