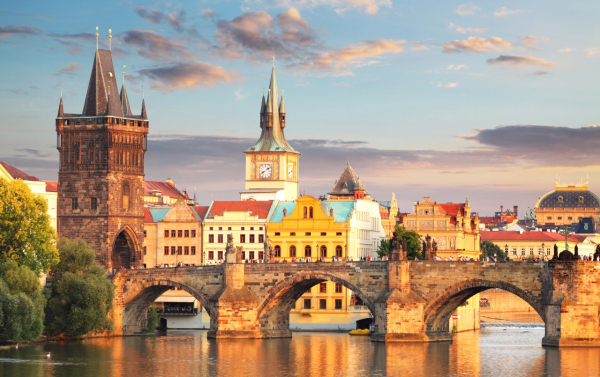 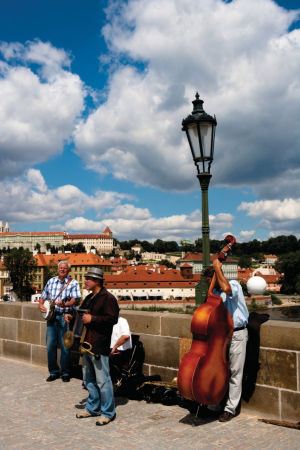 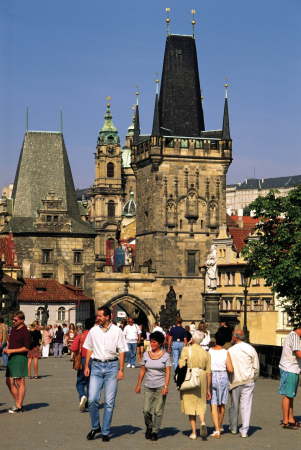 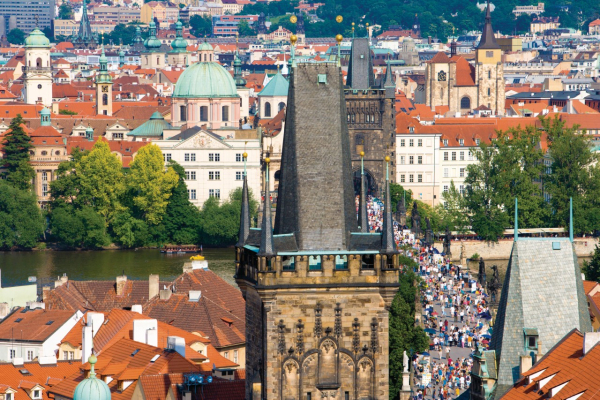 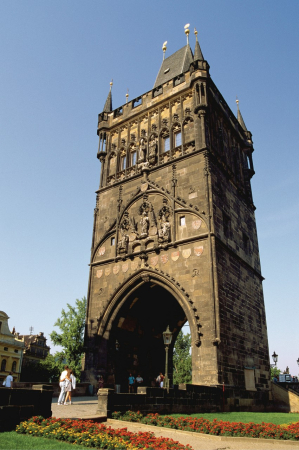 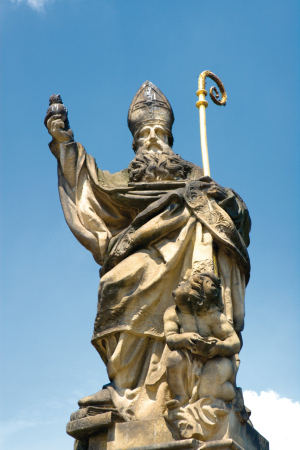 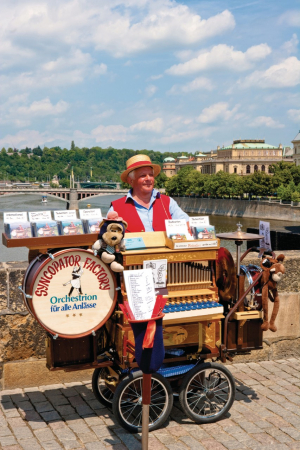 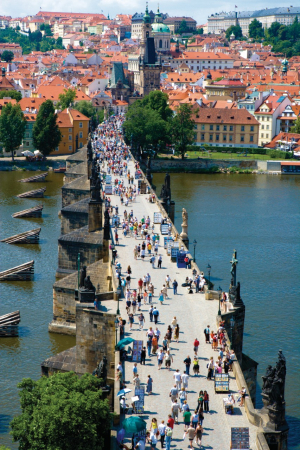 The most beautiful postcard of Prague, very touristic and crowded, but unmistakable! The bridge is on the front page of the tourist magazines.

The Charles Bridge has become the symbol of the Czech capital all over the world. It is on the front page of tourist magazines, it alone attracts millions of visitors. Why? Why? First of all, because it is reserved for pedestrians and connects the two most charming districts of the city. Because, bordered by dozens of statues, it is a true art and history gallery covering different styles and periods. Finally, because when you cross it you get a superb view of the castle, the river, the city of a hundred bell towers. Unfortunately, only if you can play neck and neck during the day... because the tourist numbers are unspeakable. The best solution, depending on the time of year you visit Prague, may be to walk the cobblestones late in the evening or at sunrise, to fully enjoy the scenery. Between these two privileged moments, attention is rather caught by orchestras, cartoonists, souvenir sellers and hordes of tourists gathering in the best places to make precious selfies. Not exactly the best show the city can offer. So if you are lucky enough to be a little alone on the bridge, here's what to expect: the Charles Bridge is a real open-air museum, both the centre of Prague and the privileged passage between the two shores. Begun in 1357, when Charles IV (King of Bohemia and Emperor of the Romans) entrusted this project to the architect Petr Parler, the construction was completed at the end of the 15th century. The first stone was laid by Charles IV on July 9, 1357 at 5:31 am. All this was not by chance: on that day the conjunction of the Sun and Saturn took place, which, according to medieval astronomy, was the happiest event of the year when Saturn's unfavourable influence was overcome by the Sun. The order of numbers and magic also played their part. The odd-numbered date representing the year, month, hour and minutes can thus be read in both directions! 1357/9/7/5/31. In 1683, following the model of the Pont Saint-Ange in Rome, statues were installed there to illustrate the religious history of the city. Until 1850, the Charles Bridge was the only bridge in Prague.

For centuries, it served as a border post before the unification of Prague in 1784, a place where disputes were settled - criminals and troublemakers were executed there - and finally, it crossed the Royal Way used by the Bohemian kings on their way to the castle. At the beginning of this century, the bridge was still open to tramway and car traffic; it is now open to pedestrians, musicians, vendors and other boaters.

The bridge tower of the old town. It is by passing it from Staré Město that we enter the bridge. It was built on the first pillar, by Petr Parler. The country's coat of arms adorns the town's facade, but does not tell of the bloody events she witnessed. After the Battle of the White Mountain in 1621 and the defeat of the Protestants, the Catholics beheaded the 27 organizers of the uprising - including Jan Jessenius, the rector of the university.

Twelve of these heads were fixed on the tower: six facing the river, the other six facing Saint-Sauveur church. One of them fell, the others remained hung for ten years before being buried in Notre-Dame-de-Týn by Protestant emigrants. The tower was part of the fortifications of the Old City. On the facade, on the side of the Old City, you can see Bohemian saints, Wenceslas IV and Charles IV and the coats of arms of the countries that were part of the crown of the Czech lands during the reign of Charles IV. The tower has sometimes been used as a prison for all those who did not pay their debts; on the walls inside you can see their messages saved until today. If you can, climb the 138 steps that separate you from the top of the tower, you will enjoy the beautiful view of the Old City, the Charles Bridge and Prague Castle. Inside, there is also an exhibition of old musical instruments accompanied by music played in the room.

The gallery of statues. There you go, there you go. This bridge is THE must-see site in Prague and unfortunately everyone knows it. In the morning, it is a pleasure to walk freely, without even caring about other tourists (there is no one there), pickpockets or others. Late summer afternoons, on the other hand, are a nightmare; passers-by walk on each other, avoid painting sellers with difficulty and jostle each other to get near statues and get their pictures taken. The bridge offers splendid views of the castle, Malá Straná and all the bell towers of the Old City, but the most beautiful remains that of Malá Straná contemplated from the statue of Saint Anthony of Padua (the 9th on the right when going to Malá Straná). From this gallery where baroque sculpted groups dominate, we can remember, on our way to Malá Straná:

The Crucifixion, the Holy Cross group, the third on the right. Dating from 1628, the statue of Christ is one of the only bronze statues on the bridge. We see him here surrounded by John the Evangelist and Saint Anne during the Calvary.

Saint John Nepomuk, 8th on the right. The oldest statue of the bridge (1683), on a project by Brokof. The bas-reliefs illustrate the history of this ecclesiastic, canonized in 1729 as a martyr of the secret of confession. Legend has it that John of Pomuk refused King Wenceslas IV to reveal to him what his wife had told him at confession. Mad with rage and jealousy, Wenceslas summoned the court chaplain to break the secret of the confession. After resisting torture, Jean de Pomuk was thrown from the top of the Charles Bridge into the tumultuous waters of the Vltava River. Many times during your walks, you will meet this saint, often represented as a chaplain, with a finger on his mouth. Having become Saint John Nepomuk, he is now the patron saint of the victims of the waves.

Sainte Ludmilla, the 8th on the left. This statue of M.-B. Braun, 1730, represents the saint teaching Saint Wenceslas to read as a child. On the base is engraved the scene of Wenceslas' murder in Stará Boleslav.

Sainte Luitgarde, the 12th on the left. Made by M.-B. Braun in 1710, this sculpted group is generally considered to be the most beautiful. It brings together Saint Luitgarde and Christ on the cross. According to legend, this saint, who lost her sight in a Cistercian convent, received the gift of knowing the secrets of the human heart and communicating intimately with Christ. He would have exchanged his heart with her, and it is this exchange that is suggested in Braun's work. The National Gallery keeps the study of this group, in gilded wood.

Bruncvík, just before the stairs leading to Na Kampě. This sculpture placed on the parapet of the bridge is one of the most popular in Prague. It depicts a knight holding his sword drawn up as a warning sign, a lion (emblem of the country) lying at his feet. Bruncvík's popularity comes from the legends surrounding him and his faithful companion, the lion, with whom he lived several adventures in the desert.

Side of Malá Strana. Here are two medieval towers that mark the end of the Charles Bridge and the entrance to Malá Strana. The little one goes back to the end of the 12th century. In fact, it was part of the fortifications of the Romanesque Judith Bridge. Its decoration in Renaissance style was elaborated in 1591. It is connected by a footbridge to the neighbouring, larger and more recent tower. Given its style and location, the latter was probably built to face the tower on the Old Town side. It dates from the second half of the 15th century. A magnificent view of the rooftops of Malá Strana and the panorama of Prague Castle opens up to you, if you have the courage to climb the stairs of this tower. Inside, a small exhibition recalls the history of the Charles Bridge 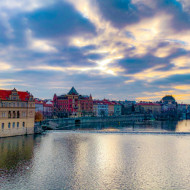