Capital of the Czech Republic, Prague is one of the most popular tourist destinations in Eastern Europe. The Charles Bridge and the astronomical clock with its characters who show their noses at the top of the bell tower every hour and real trumpet ringers, the Golden Alley and its miniature houses or the romantic district of Mala Strana, are among Prague's emblematic jewels. The historic centre of the city is a UNESCO World Heritage Site. The mixed architectural influences, Gothic, Baroque, Art Nouveau, make up an exceptional ensemble and one walks from church to church, from the castle to the sumptuous cathedral of Saint Guy, from bridge to bridge along the Voltava river. You should also visit the Jewish quarter and museums, including the fantastic communist one, parks and gardens, including those for children, and discover modern sculptures in public places. In addition, there is a rich cultural life throughout the year with shows on the stage in the old town, prestigious venues and a quality opera programme. Night owls can also go to nightclubs. Finally, it should be noted that in addition to the friendly taverns of traditional Czech cuisine, there are now also great gastronomic restaurants, with Italian influences, equipped with beautiful cellars showcasing local wines, which are really worth a visit.

What to see, what to do Prague? 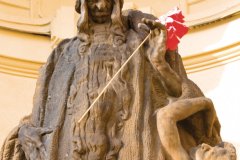 What to visit Prague ?

When to go Prague ?

Be careful in the middle of summer, crossing the Charles Bridge is an achievement. It is a continuous queue, in one direction and then in the other, and throughout it is a series of tourist catchers that must be avoided. Needless to say, it spoils the fun! Be aware that Prague is a lively city all year round with festivals and events that can be a good excuse for a stay. The Prague Jazz Festival is scheduled for one month in the spring, the Prague Spring Festival begins on the anniversary of the death of composer Bedrich Smetana and offers a rich and prestigious programme of classical music concerts between May 12 and June 3 (www.festival.cz). In June, the Vltava Music Festival (United Island of Prague) is more eclectic and offers concerts on each island in the centre of Prague on different musical themes: jazz or rock every year in early June (www.unitedislands.cz). For All Saints' Day, the cemeteries are abundantly decorated with candles, providing a magical atmosphere for visitors. Christmas offers other festivities. Prague under the snow looks magical and celebrating New Year's Eve in the Czech capital is not lacking in charm. The high tourist season extends from mid-May to the end of September. Prices are then high, especially during long weekends in May. It is therefore preferable to leave in April or October to avoid the crowds, the summer heat in summer and the cold and dry climate of winter. However, from the end of July to 15 August, the city experienced a relative tourist calm during which hotel rates were reduced by 10 to 20%. Hotel rates are at a new peak between Christmas and New Year's Day and it is preferable to book well in advance.

Due to the Covid-19 pandemic, entry and travel restrictions may apply Prague. Remember to visit the site of the Ministry of Foreign Affairs before you leave for the latest information
Practical information for travel Prague
Formalities Budget Horaires Getting around Gastronomy

Pearls of the Czech Republic in one week

The essentials of the Czech Republic in two weeks

The big loop in three weeks

How to go Prague

Easily accessible, linked by low-cost flights, Prague is an easy destination that allows you to enjoy a weekend in a capital with a very rich heritage for a reasonable budget. It will be easy to find accommodation in Prague, a city with a wide range of accommodation: cheap hotel, charming hotel in the centre, apartment rental... The city being very touristic everything is done to facilitate your stay. Plan your accommodation in advance in summer and at Christmas.

As with all highly tourist destinations, you will find a multitude of turnkey holiday proposals in the capital of the Czech Republic. Two, three, four, four, seven, ten days... it's up to you. The most common and advantageous formula combines flight, accommodation and guide for visits.

Moving within cities is very easy in the Czech Republic, where years of communist rule followed by a healthy economy have led to the creation of dense, efficient, very cheap and easily usable networks for tourists. This is particularly true in Prague, which has a modern, clean and fast metro system, as well as a dense tram network, operating 24 hours a day. Taxis are a more expensive, but affordable, and sometimes more practical alternative

Top 10 Czech castles and chateaus to visit in winter

A true marker of Czech literary and artistic creation, the sense of the absurd has been born over the centuries through occupation and external domination, against which the only weapon remained the pen and irony. This is particularly true of all the main Czech writings, Soldier Švejk of Hašek, and Kafka or Kundera.

The pivo is the national drink of the Czechs. They are even well at the top of the ranking of the world's largest consumers of this popular beverage with nearly 150 litres of beer consumed each year per capita, ahead of Austria and Germany by nearly 50 litres. Any occasion is good for a beer!

The most widespread popular disease in the Czech Republic, as well as cardiovascular diseases or digestive tract cancers in general. When you taste the particularly hearty, heavy and salty dishes in sauce, you will then understand why almost a third of Czechs have high cholesterol levels.

A Bohemian speciality, crystal is sold everywhere in Prague. Its tradition dates back to the 13th century in the mountains of northern Bohemia. The most emblematic factory located in the city of Jablonec nad Nisou. The best place to buy crystal is Erpet or Moser shops, located in the old town square.

Ice hockey is a true national religion: its great stars Jaromír Jágr and Dominik Hašek are idolized! Unlike the rival nations, Canada and Russia. And for good reason, with twelve titles (six as Czechoslovakia), they are third in the rankings of the greatest ice hockey nations of all time

Equivalent to a bistro or a French tavern, the hospoda is a central place in Czech social life. A clever mix of classes, genres and ages, where everyone meets. As consumption is much cheaper than in France, meetings with friends are almost systematically held in hospodas rather than at home!

The kavarna are to Prague what the literary cafés are to Paris. Often leaning against cultural sites, they are elegant places where intellectuals, students and philosophers always meet for a coffee break. In Prague, the Slavia (opposite the National Theatre), Arco and Imperial (opposite Masarykovo Station) cafés are 100 years old.

In Prague, you will notice objects, plush toys and other illustrations of a mole that look innocent and adorable. This is Krtek (which means mole in Czech), the hero of a Czech cartoon from the 1950s. The cartoon was also exported to the four corners of the world, bringing unparalleled fame to this small silent animal..

An important part of popular culture, puppets have been used since the Renaissance to educate children. Some of them, such as the mythical Hurvínek, are the symbol of the first children's television programmes. Puppets have also often been used by adults, offering political and social caricatures.

This Czech version of the wafer is served hot, sweet (honey) and stuffed with vanilla nuts. The dessert comes from the spa of Karlovy Vary, where it was given to people taking the waters: oplatky are particularly easy to digest. They are served at Christmas dinner. They can be found in supermarkets and souvenir shops.

The purpose of many Czechoslovakians' lives was to own a Škoda (pronounced Chkoda). Since then, the former national company has been acquired by the German giant Volkswagen (1991) and is attracting more and more customers in Western Europe with its models. Czech irony again, Škoda means "bad luck" or "damage" in Czech!

The symbol of the Czech mentality in all its facets and with all its clichés: quiet, ironic, political, sometimes lazy, bon vivant. A literary creation by Jaroslav Hašek, who describes in his novel Le Brave Soldat Chvéïk (in French) the adventures of a sergeant, drinker and impostor before and during the First World War.

You sit at an already busy table and ask: "prosím Vás, je tady volno ?" (pronounce: procime vasse, yé tady volno? that is, "please, it's free here?"). In the Czech Republic, you share your table as in good old-fashioned inns.

You don't order a second beer because yours is almost finished. The server will bring you one without you having to worry about it.

You take off your shoes before entering a house to which you are invited (also useful if you are staying with a local).

You leave a tip at the restaurant or café, because it is the largest part of the waiters' salary!

You only order wine for the aperitif and quickly switch to beer to accompany the meal.

You avoid asking for a carafe of water in the restaurant: all drinks are charged in Prague!

Other destinations nearby Prague