There are no bad omens under these umbrellas. Inaugurated in 1997 - the year Thessaloniki was designated "European Capital" - this 13-metre-high installation of 40 stainless steel umbrellas and poles does not foretell any bad weather. The result of the imagination and talent of the Athenian artist Giorgos Zangolopoulos, the "Umbrellas of Thessaloniki" invite contemplation. Beautifully lit at night, they have become the most photographed monument in Thessaloniki.

The wealth of museums without the crowds

It is good to come to Thessaloniki, especially if you love art. With dozens of museums, 23 centuries of history, this agglomeration of 1 million inhabitants and its international airport, the capital of Macedonia, has nothing to envy to Athens... except, obviously, a certain notoriety. In the meantime, inspired visitors are delighted. In its famous archaeological museum, they still avoid the crowds of the capital, but not the masterpieces. Among the richest in Greece, this museum, designed according to the plans of an ancient Macedonian villa, presents the history of the region, from prehistory to the Roman era. Among its "jewels", the section dedicated to "The Gold of the Macedonians" is dazzling: in three large rooms are gathered real treasures from necropolises of the archaic and classical periods, crowns and diadems decorated with gold leaves discovered in the tombs of members of the aristocracy. If you have a few hours to spare, especially in the muggy hours of summer and early autumn, it is advisable to take a combined ticket with the wonderful Museum of Byzantine Culture next door. The elegant concrete and brick building traces, in a very pleasant and didactic way, the Byzantine culture in Macedonia from the Paleo-Christian period to the 19th century through a collection of almost 3,000 objects, frescoes, icons, sculptures and other jewellery.

In Thessaloniki, happiness on the terrace

Many tourists will pass by Aristotelous Square afterwards - or before: architecturally speaking, it is undoubtedly the city's most beautiful setting. The great Macedonian philosopher, a native of Thessaloniki and tutor to Alexander the Great, gave his name to this elegant esplanade, which was completely redesigned by a French town planner, Ernest Hébrard, after the great fire of 1917 that devastated Thessaloniki. On hot days, you can enjoy a coffee with a view. The elegant Electra Palace, to the west, faces the Olympion cinema, which hosts an annual International Film Festival with a demanding programme in November.

To the north, the square overlooks the Roman Agora, a forum built (2nd century AD) on a Hellenistic agora. To the south, the square opens onto the Thermaikos Gulf and Nikis Avenue, a succession of cafés and seaside terraces that give the city the appearance of Barcelona's "ramblas". This pleasant walk leads to the White Tower, the other icon of the city. This former bloody prison, built by the Ottomans in the 15th century, now houses a small museum. The courageous will climb (on foot...) its 34 m and will enjoy a wonderful panorama on the gulf.

A city full of history

Thessaloniki is an open-air history book. On the Paralia, the pleasant promenade on the sea front, the statue of Alexander the Great reminds us of the emperor's patronage of the region. However, the city did not yet exist at the time of Philip II and his son. It was built on the site of the ancient Thermi, in 315 BC, by King Cassander who named it after his wife Thessalonikê, daughter of Philip II and half-sister of Alexander. Around the year 300, it was the Roman emperor Galerius who made this strategic city, conveniently located on the Via Egnatia that led from Rome to Byzantium, his main residence and anchored it in history. He built an imposing palace, the ruins of which are still visible, and above all the Rotunda. This pagan temple with remarkable frescoes was transformed in turn into a paleo-Christian church around 390, into an Ottoman mosque in 1590 and again into a church in 1912, when Greece recovered part of Macedonia after the Balkan wars. However, it still has its old minaret of 36 m height, the only one preserved today in Thessaloniki.

Here culture is at every corner, in the museums, but especially outside. The Basilica of Agios Demetrios, the largest church in the city, is a reminder of the golden age of the second city of the Byzantine Empire. Although rebuilt after the fire of 1917, the present building retains the original plan of the church built here in the 4th century. Even the church of Agia Sofia, named after its illustrious model, the church of St. Sophia in Constantinople, is built on top of a first basilica from the 5th century, of which some elements remain. As such, both buildings are among the monuments of Thessaloniki listed as World Heritage by UNESCO.

No less than 15 early Christian and Byzantine monuments in Thessaloniki were listed as World Heritage Sites in 1988. Among them, the remains of the upper city walls, 6 km long, are the occasion for another pleasant walk. Built as a defensive system by the Byzantines from the 4th century onwards, they are punctuated by some sixty towers and six other listed churches. To fully enjoy the site, we recommend that you hail a taxi, which will take you to the Trigonion tower for a few euros. Not only does it offer a superb view of the city, but it is also the starting point for a picturesque walk in Ano Poli. The "upper town", with its village-like cobbled streets lined with corbelled houses, is undoubtedly the most charming district of Thessaloniki

Because culture is also in the plate, without any doubt. Often presented as the gastronomic capital of the country for its openness to the flavours of Anatolia, the city offers a wide choice of restaurants, gastronomies and also culinary experiences. Head to Ladadika, west of Aristotelous Square, where old workshops have been transformed into trendy restaurants and bars. The rehabilitated port area has also seen the transformation of an old warehouse into Kitchen Bar, a café-restaurant with a magnificent view of the white tower and the bay. At daybreak, some will take to the waterfront for an early morning coffee. On a clear day, the lucky ones will see the outline of Olympus on the other side of the bay. Greece's highest mountain reaches up to 2,917 metres. It's enough to make you think about extending your stay in one of Greece's ten national parks. Needless to say, it will be just as divine. Here again, nature meets culture. Let's not forget, as Homer reminds us, that this is also the resort of the gods..

When is it? The months follow one another and are not alike. All have their own charm: between the high temperatures (over 30°C) in summer and cold spells (even snow) in winter, the mild months of June and September are best.

Getting there. Depending on the season, several airlines (Air France, Transavia, Aegean Airlines, Ryanair) offer between 2 and 6 direct flights per week (3h30). 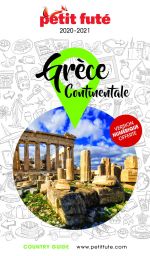 Travelling doesn't have to mean going broke! There are plenty of possibilities to get away from it all, even on a small ...

2020 is approaching, the opportunity for us to share with you our travel tips for this year! Universal exhibition, ...

Where to go in November? Where and when to go? Destinations and tips

With winter fast approaching and your coats out, are you dreaming? Nothing like a little trip to recharge the batteries. ...

Looking for a change of scenery for a weekend? Tired of long and tiring trips? The destinations that Le Petit Futé has ...