Dubrovnik, a port city located along the Adriatic, is undoubtedly one of the most beautiful cities in Croatia. On sunny days, when the sun shines generously and invites you to join the surrounding beaches to refresh yourself, you can also take the time to stroll around the city walls to discover its precious heritage, wander through its museums and stop at its terraces to enjoy its local gastronomy. Dubrovnik is a lively, welcoming city, and many festivals take place there to celebrate music, dance, theater and local culture. In fact, one of Dubrovnik's special features is that it is a city that vibrates all year round, with regular events that cater to all audiences. And then, outside of the old town there are other neighborhoods to explore, hilly nature to hike in and islands to reach to enjoy the pleasures of being in one of the most fascinating places on the Adriatic Sea.

Architecture, shopping, gastronomy, Dubrovnik is a jewel of the Adriatic

The Croatian coastline is appreciated by visitors from all over the world. And for good reason! Along the translucent waters of the Adriatic Sea are cities with remarkable heritage and so much to offer for a memorable summer vacation. Dubrovnik is one of them, a real favorite in the country. Whatever the season, you will love to stroll through the old town to discover its countless treasures. It is indeed endowed with a superb patrimony, with unmissable buildings such as the Sponza Palace, with its Gothic and Renaissance elements; the Rector's Palace, which also shines with its Gothic style; the Franciscan monastery, with its picturesque cloister, or the Cathedral of the Assumption, with its Baroque style and inimitable paintings. A walk along the walls of the walled city is another must. Originating in the 10th century, they provided a solid line of defense against invaders, before becoming today one of the best preserved ramparts in Europe, where the walk reveals breathtaking views of the city and the sea.

To marvel again and again at the heritage, we also think of going to see these little treasures that are the gates of Pile and Ploce, beautifully decorated, the Clock Tower, the column of Orlando, the fountain of Onofrio on the square of the Loggia and west of the walls, the fort Lovrijenac. Dating from the 11th century, it is located on a rocky promontory 37 m above sea level.

How can we talk about the heart of Dubrovnik without mentioning the Stradun? This main axis is almost 300 meters long and is a great place to enjoy the life that is in full swing, admire the beautiful facades, stop in the stores selling ready-to-wear clothes and jewelry and enjoy the terraces of the bars and restaurants. You can enjoy a good coffee, a fruit juice and of course taste the best recipes of South Dalmatia. These include seafood, fish such as grilled sardines, octopus salad and black risotto. The dishes are always prepared with olive oil and served with fresh vegetables with a good glass of wine such as Plavac, Dingač or Pošip.

Dubrovnik, a city where culture is in full swing

A stay in Dubrovnik is an opportunity to take advantage of its museums to learn more about the history of the city and see works of art. You can go to the Archaeological Museum, which contains historical pieces from the Neolithic period to the 16th century; the Museum of Modern Art, which contains more than 2,500 works of art; the Ethnographic Museum, where objects explain Dubrovnik's economy and culture; and the Museum of the War of Independence, which traces the consequences of the Yugoslavian war on the city.

In addition, there are a multitude of festivals that enliven the port city season after season. An opportunity for locals and visitors to gather around culture and to celebrate. In spring, there is the Dubrovnik Festiwine, which invites visitors to visit wine producers' cellars to discover the wines; the Dubrovnik Musical Spring, concerts organized by the Dubrovnik Symphony Orchestra; or the Small Theater Festival, where poets, actors and dancers perform in the city. Sportsmen and women are also welcome to participate in the half-marathon at the end of April and beginning of May and discover the city's treasures in a few strides

Then comes the Midsummer Scene, an English-language theater festival held at Fort Lovrijenac, and the Dubrovnik Summer Festival, held in July and August, during which numerous artists perform in churches, palaces and old squares. Opera, ballet, theatrical performances, the program is rich and diversified. Also in July, the youth do not miss to go to the Culture Club Revelin to attend the electronic music festival where a multitude of DJs come to ignite the dancefloor. While summer is over, the Good Food Festival takes over in October with a time around food and wine. The city's restaurateurs offer original dishes and festival-goers can also participate in culinary and cocktail-making workshops. A moment to celebrate the local culinary wealth.

And because there is no season for partying and having a good time in Dubrovnik, travelers who wish to return in winter can discover other highlights, including the Dubrovnik Winter Festival. From December to early January, the city is filled with illuminations, concerts and a glass of mulled wine. At the beginning of February, the Saint-Blaise Festival is held to celebrate the city's patron saint. The festivities, which are included in UNESCO's list of intangible cultural heritage, are an opportunity to follow the procession and see the inhabitants dressed in their best traditional clothes. The next day there is a mass in the cathedral and many events take place, including concerts, shows and exhibitions.

Dubrovnik, a city open to nature

Dubrovnik is located in the middle of a wonderful natural environment. It is essential during your stay to take the cable car to reach in a few minutes the Srđ mountain, a symbol of a beautiful hilly natural environment, but also a formidable belvedere with an enchanting view of Dubrovnik, the Adriatic Sea and the islands.

In the Lapad district, there are large hotel complexes, but also places where you can get closer to nature with the Lapad bay and the Velika and Mala Petka Forest Park, a very relaxing place with its pleasant hills and woods.

Summer in Dubrovnik is also the ideal time to go swimming in the translucent waters of the Adriatic Sea. Banje beach is the most famous one, as it is only a stone's throw from the old town. But there are also other little corners of paradise not far away, such as the beach of Plaza Sveti Jakov, regularly designated as one of the most beautiful in Croatia. And since the sea is omnipresent in Dubrovnik, one should not hesitate to embark on a kayak to reach the haven of peace that is the neighboring island of Lokrum. And don't forget to take a boat trip from the old port of Dubrovnik to the Elaphite islands, a string of islands with a wild and luxuriant nature 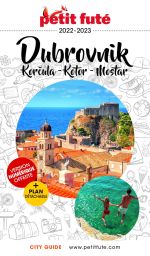 For some people, retirement is the perfect time to change their life and fly to new horizons. What if it was the ... Read the article

Spring in Dubrovnik: 10 good reasons to visit the city before summer

Located on the beautiful Dalmatian coast of Croatia, Dubrovnik is a jewel of the Adriatic and a true open-air museum. ... Read the article

At any time of the year, weekends with friends are the best way to unwind and enjoy a little break from the stress of ... Read the article