In southern Croatia, on the Adriatic Sea and at the foot of the Srd mountain, the Dubrovnik peninsula (formerly Ragusa) shelters the ancient city sheltered by gigantic 16th century stone ramparts, a world heritage site rich in preserved historical monuments, from the Baroque Saint-Blaise church to the Renaissance palace Sponza, including the Rector's Palace, in Gothic style, which houses the History Museum. Dubrovnik's commercial heart beats along the pedestrian street Stradum, which offers shops, terraces and restaurants. Since the end of the Second World War, the site has become a renowned seaside destination with an alternation of coves and beaches, including the mythical Banje beach, to enjoy the water sports. On the program: swimming, sailing, windsurfing, jet-skiing, diving... Due to tourism, the site has a large number of restaurants and hotels in different comfort ranges. To get higher, walk on the ramparts which offer you a view of the sea and the mountain and allow you to spot the city's monuments. Dubrovnik's must-see attractions include the Maritime Museum, the Aquarium of the Biological Institute, the Ethnographic Museum, the Cathedral and the Franciscan and Dominican monasteries. You can also schedule a visit to the Trsteno arboretum, 20 km from Dubrovnik. Players will enjoy the sumptuous Golden Sun Casino and series fans will be sure to think of Game of Thrones, which has Dubrovnik as its main setting.

What to see, what to do Dubrovnik? 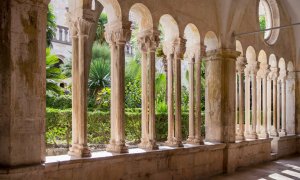 What to visit Dubrovnik ?

When to go Dubrovnik ?

The high tourist season in Dubrovnik is undoubtedly summer, July and August. The sun shines, the sea is warm and the famous Dubrovnik Summer Festival (theatre, music and folklore festival), which takes place from July 10 to August 25, animates the city. The nightlife is lively. A beautiful effervescence that also deserves a stay: the Dubrovnik Carnival in February. During this period, St. Blaise (February 3), the patron saint of the city of Dubrovnik, is also celebrated. But a very pleasant climate from the beginning of April to the end of September and a few more sunny days in October allow stays for more than half the year. November is the least suitable month for a stay. It is during this period that everything is closed. The low tourist season runs from November to the end of March. With temperatures between 7 and 15°C from December to March, winter remains pleasant. Please note that the price of accommodation doubles in July and August compared to the rest of the year.

Due to the Covid-19 pandemic, entry and travel restrictions may apply Dubrovnik. Remember to visit the site of the Ministry of Foreign Affairs before you leave for the latest information
Practical information for travel Dubrovnik
Formalities Budget Horaires Getting around Gastronomy

A long weekend in Dubrovnik

Dubrovnik in one week

How to go Dubrovnik

You can easily reach Dubrovnik by car, plane or bus from major European cities, by ferry from Italy, but not by train. The city is not served by the rail network. If you plan to stay in the summer, it is better to book your accommodation in advance. If your objective is not to have your feet in the water, you can find charming accommodation in the old town.

As with all highly tourist destinations, Dubrovnik is offered by a large number of travel professionals. The turnkey weekend package for the inter-seasons and the all-inclusive seaside package for the summer. You can also choose from the catalogue of specialised sports trips for sailing, diving, etc...

The best way to get around and enjoy Dubrovnik's many attractions is on foot. You can also take advantage of the modern and air-conditioned Libertas bus network. You buy bus tickets from the driver, from newsstands, bus stations, hotel reception and tourist agencies. The ticket is valid for one hour from the time of check-in for an unlimited number of trips in the city.

Dubrovnik, city of art and culture

Spring in Dubrovnik: 10 good reasons to visit the city before summer

Dubrovnik is first and foremost a breathtaking medieval city, a fortified city surrounded by walls and dotted with palaces and churches in Renaissance style. But the "pearl of the Adriatic" also rhymes with beaches and turquoise water, water sports and diving. From this southernmost port of Croatia, you can explore the islands and the hinterland, where you can choose between walking tours and gastronomic tours (not to be missed: the wines of Pelješac, Korčula and Konavle!). An independent republic for several centuries, Dubrovnik has maintained a certain cultural pride and prestige. In summer, the Dubrovačke ljetne igre theater and music festival remains one of the most important in the country. It has been held since 1950! Finally, if you feel like a completely new angle, the old Ragusa has recently become "King's Landing", one of the filming locations of the Game of Thrones series.

The districts of Dubrovnik

The bora(bura in Croatian) is a violent and cold wind, which arrives in winter from the mountains of Velebit and dies over the Adriatic Sea. This wind sometimes gives rise to impressive gusts of wind and cools down the ambient temperature considerably. On the positive side, it brings good weather, unlike the jugo, the south wind

Literally, buža means "hole". This is the name of the most popular and original bar in the old town. There are two buža, both of them overlooking the sea and offering a unique view! You can even take a dip in the Adriatic

This famous wine produced on the land of the locality of Dingač, in Pelješac, is one of the rising stars of Croatian viticulture. This Denomination of Origin wine, made from the local grape variety called plavac mali, a cousin of the American zinfandel, produces a red wine with character, subtle aromas and a beautiful ruby colour.

Nearly a hundred islands and islets dot the Dubrovnik region. Very different: small or large, flat or mountainous, inhabited or deserted, these islands are home to a plethora of coves and beaches. The island of Korčula is one of the most important, followed by Mljet, part of which is classified as a national park.

Coffee is drunk at any time of the day, at the end of a meal or during the day. As a result, the terraces are always full. The coffee served in bars and restaurants is espresso, cappuccino and macchiato Italian style. In the homes of locals, it is often served Turkish style. The 10am break is the marenda.

This polyphonic song is often heard in the Dubrovnik region. It is sung by traditional male choirs. You can hear them rehearsing in front of a church or a concert hall or even in the street during festivals. The town of Cavtat organizes a klapa competition every year in summer.

Konoba means tavern in Croatian, but in reality, this name refers to any restaurant in the Dubrovnik region. Konoba is traditionally a rustic, small-capacity establishment with a grill area, serving mostly fish dishes. Sometimes the place also serves as a bar.

With the inevitable automation of lighthouses, keepers are becoming increasingly rare. Except that these vacant accommodations have been converted into lodgings for vacationers thirsty for solitude and sea air. In the Dubrovnik region, it is possible to stay at the lighthouses in Pločica (between Korčula and Hvar) and Palagruža, south of Lastovo.

This is the old name of Dubrovnik and its independent republic. The term evokes the golden age of the pearl of the Adriatic, which extended from Neum through Konavle to Prevalka (on the border with Montenegro today) and included the Elaphite Islands, Lastovo and Mljet, as well as the Pelješac peninsula.

Rakija is a common spirit throughout the Balkan Peninsula and is also served in the Dubrovnik region. It is flavoured with herbs(travarica), walnuts(orahovica), or made from prunes(šljivovica). Milder: honey rakija(medica). Rarer (but very good): sage(kadulja) or quince(dunja).

The patron saint of Dubrovnik is St. Blaise (Sveti Vlaho), who has been the city's protector for nearly a thousand years. A third-century Christian martyr and bishop in Cappadocia, he appeared in a dream to a Dubrovnik shepherd in the 10th century, announcing an imminent attack by Venice. The Dubrovniks thus had time to prepare a counter-attack

This is THE street of the old town! Also called placa (official name), locals prefer the Italian-sounding name stradun. Paved with stones from the island of Brač, it separates the old town into two parts and has no numbers. The addresses are therefore called b.b., or "without number"

You drink your coffee for hours. Possibly sitting a few meters from the sea or on a rock.

You leave to visit the islands. There are the Elaphites and Lokrum right next door, Mljet and Korčula halfway and Lastovo for the adventurous. Needless to say, there are no bad choices!

You walk along the Stradun. No need to know your destination, the old town can be visited quietly and from this street.

You know the local wines. The theoretical part is easy: the reds come mostly from Pelješac (Plavac Mali, Dingač), while the most famous whites come from Korčula (Pošip, Grk). Now you only have to do the practical part: a tasting tour!

You always have a towel in your bag. The sea is never far away and there is nothing better than a little splash to cool off. Moreover, in the morning, the beaches are deserted!

Other destinations nearby Dubrovnik