During the Roman period, in the 1st century BC, the city underwent rapid development, when the Emperor Augustus granted it the status of a municipality. Today, traces of this imperial reign can be found in many places, around the fortress, for example. During the medieval and Renaissance periods, it was topped by four bell towers and campaniles. From the end of the 19th century, the island and the city of Rab attracted wealthy European tourists. Even today, it is crowded during the summer, especially on the main square or the riva, during the medieval festival, which is one of the most important in the country (three days at the end of July).

The historic centre still has some beautiful Venetian palaces built in the 15th and 16th centuries. You can admire them along the streets Srednja Ulica or Donja ulica. The latter was laid out in ancient times and became the city's economic showcase. As you walk along it, you pass the baroque Sveti Antun chapel, which faces the Palača Dominis. This episcopal palace, in which Markantun, former bishop of Senj and archbishop of Split, was born, is the best preserved in Rab. The elegant Municipal Loggia (Municipium arbae) dates from 1509 and today houses a café terrace. Its balcony is decorated with winged lions carved in the Venetian style. To the northwest of the square, the facades of the Rector's Palace (Knežev dvor), the Bivši Palača Knezova, and the Dominis Nimira, where the writer and philosopher Markantun Dominis was born, are all princely residences built in the Southern Gothic-Renaissance style, imported from Italy. A complex dominated by a high tower with beautiful openings, where today the town hall is located. The historic square, ending on the Donja Ulica, with a square three-storey tower, with balconies decorated with beautiful lions' heads. Near the Dominis Nimira Palace, the St. Christopher's Chapel, the church, the St. John's Tower and the monumental 26 m high campanile, which can also be visited. You will have a wonderful view of Santa Maria Maggiore, the roofs of the city, the marina on one side and the sea on the other. Not to be missed is a walk in the "Komrčar", a beautiful Mediterranean park and the sunset from the top of the ramparts, at the level of Santa Maria Maggiore, with the slender silhouette of the campaniles in the distance.

Ferries and catamarans connect Rijeka, the islands of Krk, Pag (Novalja), Zadar, from Rab/Port or Lopar.

The must-see places in Rab

Prepare for your trip Rab 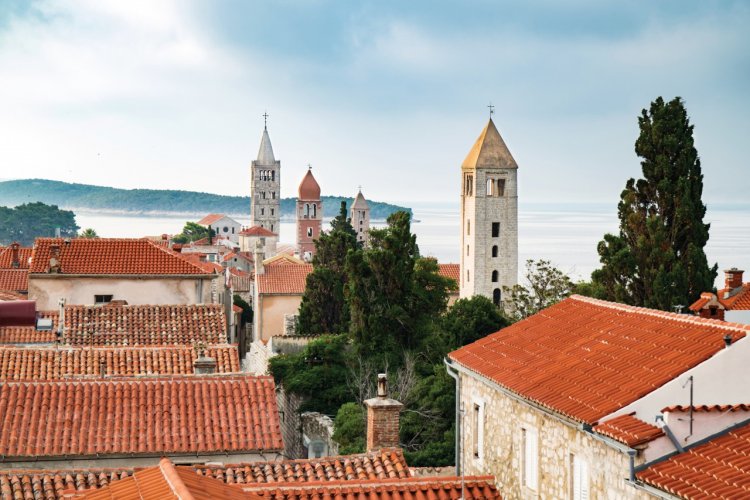 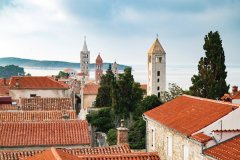 From Dubrovnik to Zagreb, not to mention Split and its enchanting coastline, Croatia has sumptuous places to discover. But it would be a shame to be satisfied with the continent. Croatia is the country of a thousand and one islands (1,185 to be precise!). Deserted coves, amazing seabeds and island lifestyle await you for a stay where nature and culture will be at the rendezvous. Petit Futé offers you its selection of the 10 most beautiful ...