Tanzania is blessed with an enviable list of natural wonders. The country is arguably one of less than a handful of countries in the world where you can combine a high-end safari with a yacht cruise of the same calibre. The legendary Serengeti National Park, probably the most iconic African wildlife park in the world, is located in northwest Tanzania. The country is also blessed with other top-notch parks and wildlife reserves, such as Selous Game Reserve, Ruaha National Park, Ngoro Ngoro Crater and Katavi National Park, to name a few. Combine a visit to any of these parks with a cruise along one of the world's most iconic archipelagos - the Zanzibar Archipelago - and other beautiful islands and coastlines that are the epicentre of Swahili culture, and you'll find that Tanzania really does have more to offer than any other country in terms of wildlife viewing and yacht cruising.

Rich in history and white sandy beaches bordered by the warm turquoise waters of the Indian Ocean, Zanzibar is now one of the most iconic names in the world and just hearing the name awakens a sense of adventure and exploration.Located some 25 nautical miles off the coast of Tanzania in East Africa and about six degrees below the equator, Zanzibar is an archipelago consisting of two main islands, Unguja and Pemba, and a few smaller islands.Historically, Zanzibar refers mainly to the coral stone town, now aptly named "Stone Town" (which for over a century was not only the center of trade in East Africa, but also became the capital of the Sultanate of Oman), on the island of Unguja.

The island's 800 years of history up to the present day can be seen on a walk or guided tour of Stone Town, an essential stop on a Zanzibar archipelago cruise. Our yacht fleet is based just outside this iconic historic town, home to the archipelago's only international airport.The sailing around Unguja offers secluded offshore tidal sandbanks that can only be set foot on at low tide, extremely scenic spots that are very popular with our cruisers due to the quality of the snorkeling and the privacy they offer.Several small islands around the main island offer beautiful, secluded places to anchor and come ashore to explore or snorkel the beautiful reefs around them. Of particular interest to the area are Prison Island, where you can see the giant Aldabra turtles, and Grave Island, where you can visit the graves of the British sailors who lost their lives around Zanzibar in the 1800s to 1950s.It is also possible to witness a unique aggregation of Zanzibar flying foxes and giant fruit bats, which roost during the day and take flight at sunset, while sipping a cool drink in the comfort of your yacht. 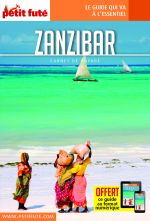